EXTRACT | ‘The Blinded City’ by Matthew Wilhelm-Solomon: Of ghosts, grief and gritty determination 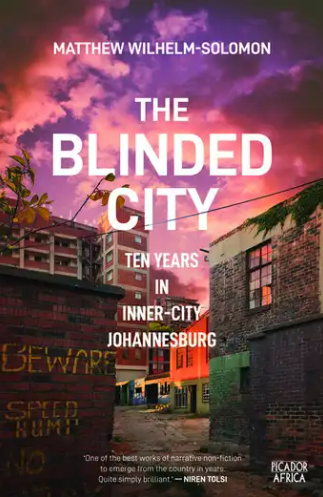 'The Blinded City' recounts the history of inner-city Johannesburg from 2010 to 2019.
Image: Supplied

One of the best works of narrative non-fiction to emerge from the country in years. Quite simply brilliant. — NIREN TOLSI

Amid evictions, raids, killings, the drug trade and fire, inner-city Johannesburg residents seek safety and a home. A grandmother struggles to keep her granddaughter as she is torn away from her. A mother seeks healing in the wake of her son’s murder. And displaced by the city’s drive for urban regeneration, a group of blind migrants try to carve out an existence.

The Blinded City recounts the history of the inner city from 2010 to 2019, primarily from the perspectives of the unlawful occupiers of spaces known as hijacked buildings, bad buildings or dark buildings. Tens of thousands of residents, South African and foreign, live here in dire conditions. This book tells their storyand the court cases which strike at the centre of who has the right to occupy the city.

In February 2010, while Joburg prepared for the Fifa World Cup, the South Gauteng high court ordered the eviction of the unlawful occupiers of an abandoned carpet factory on Saratoga Avenue and that the municipality provide temporary emergency accommodation for the evicted. The case, which became known as Blue Moonlight and went to the Constitutional Court, triggered a decade of struggles over housing and eviction.

The Blinded City chronicles this case, among others, and the aftermath — a tumultuous period in the city characterised by recurrent dispossessions, police and immigration operations, outbursts of xenophobic violence, and political and legal change. The decade saw successive mayors and their attempts to “clean up” the city, and the struggles of residents and urban housing activists for homes and a better life. The interwoven narratives present a compelling mosaic of life in post-apartheid Joburg, one of the world’s most infamous and vital cities.

Thandiwe was fully sighted, and Naledi partially sighted. They bantered about the meanings of blindness back in Zimbabwe.

Naledi grew up in the Zimbabwean Midlands Province in a mixed Shona and Ndebele area. As a child she had cataracts that had gradually diminished her sight — ‘I can see light and dark.’ She had had an operation for her cataracts when she was 12, but her partial sightedness remained. ‘When someone is meant to be blind, you are blind for life,’ she said. ‘In our area it was very uncommon for people to be blind. How can a person be blind?’

‘They think they are bewitched,’ intercepted Thandiwe.

‘Yes, some think we are bewitched,’ Naledi affirmed. ‘Some treated me badly, some treated me well. My family came to see me as normal.’

‘Some see you like you are an umthakati, a witch,’ Thandiwe teased. ‘Long ago, if you gave birth to a blind child, they would throw it in the river.’

‘Then the crocodiles would eat you,’ added Naledi. ‘Some believe that maybe you did wrong with the ancestors. In our culture in Zimbabwe, people believe you have ancestors who have been dead long back. I could be possessed. Another voice would be talking through me, saying “I’m your ancestor.” They will tell you to do something, and if that’s not done then your grandfather could be angry and make you have a blind child to punish you.’

From this perspective, blindness could be a misfortune bestowed by ancestors, but the blind themselves could have powers of sorcery.

‘The abathakathi [witches] can also make you blind for business,’ Naledi continued. ‘In rural areas, they say they can make you blind to use in business [that is, begging]. Some believe that blindness comes from God.’

At Chambers, some of the other residents accused the blind community of being witches, a recurrent form of stigmatisation. Naledi had lived at Chambers between 2007 and 2010. She moved out in 2011 when social workers took her children away from her for six months (they were eventually returned). She was at Chambers during the xenophobic violence of May 2008.

The violence lasted from 11 to 25 May. In the inner city, groups had organised around the primarily Zulu hostels in the south-east of the city and moved north. ‘They came to our flat,’ Naledi said. ‘They were using torches and knocked next door. My next-door neighbour was a Malawian. They spoke in Zulu, and he answered in Malawian [what was likely Chichewa]. They beat him until he died.’ The residents reported the incident to the police, but the violent groups returned several days later. ‘The first thing we said was that we were blind. They argued whether I was blind, but then the others came out, and they saw we were all blind. When we were outside, a woman came down the passage with her baby, and they killed her. I heard them saying they had killed her.’ According to Naledi, the woman who was killed used to work as an assistant to blind beggars at the traffic lights.

The attackers left the blind residents unharmed. Naledi believes the killers were afraid of the supernatural punishments that might come to them if they killed blind people. Along with many other Zimbabweans from the building, the blind residents fled to Jeppe Police Station, which was only a few blocks away. Hundreds of migrants fleeing the violence gathered there. The police, so often the persecutors of cross-border migrants, had become their protectors.

Naledi, too, had stories of ghosts at Chambers. ‘A certain lady,’ Naledi told me, ‘lit a paraffin stove and threw it over her husband. The husband was burning, and he died. After a month you could hear footsteps, and you ask someone  to go outside, but they can’t see anyone. I was staying next to the room where the husband was burned. I saw the ghost. The whole passage was only bright. You smell dagga burning, and you ask someone to look who is smoking, but there is no one.’

After a few hours chatting, I said goodbye. I did not know it at the time, but both women were pregnant.

The year 2012 was to be a year of both birth and loss. Thandiwe’s mother and Jetro’s father both died on 6 June in Zimbabwe. In the same week, Naledi’s daughter, only 10 months old, also died — of an unknown cause — and she was to give birth to another child. Thandiwe, soon to go into labour, was unable to travel to attend her mother’s funeral.

Thandiwe and Jetro’s daughter was born, via Caesarean, on 24 June at 9am at the Charlotte Maxeke Johannesburg Academic Hospital, formerly the Johannesburg General Hospital. When the child was born, she had both heart and breathing problems and was put immediately into intensive care to stabilise her breathing. Fortunately, the child survived, and the new parents took her home to City Hives, where they named her Triumph. The name was given in tribute to the child and family overcoming this brutal month.

In November that year, Naledi was facing high risk, as she had a breech baby. Having lost her papers, she was denied medical care at an inner-city clinic. In South Africa, constitutionally, undocumented migrants share the same entitlement to primary and emergency health care that citizens do. Although unlawful, it was a common experience among migrants in the city to be turned away by xenophobic health workers. MSF had to intervene, and Naledi was transferred to the Charlotte Maxeke Hospital. I visited her there, passing through the long, empty wards that form an intricate maze. I was born at the Charlotte Maxeke Hospital, when it was still known as the Joburg Gen. It is a grey geometric and concrete structure. Red lines painted on its exterior lead to a large chimney, and somehow it looks like a factory for life and death: a place in which sorrows and hopes are ground up and exhaled into the orange evening sky.

I wondered, walking along those passages, whether there was any affinity  between lives that come into being at the same point in space as those who depart? How do places bear our traces?

In the ward, I found Naledi looking very thin and frail, her large sightless eyes like moons against her gaunt skin. She was on a drip and had been vomiting all night. She had been struggling to breathe the night before, and they had put her on oxygen. She told me that her child had died shortly after birth.

She spoke about being with her child while he was still alive: ‘His heart was beating slowly, slowly, slowly, too slowly,’ she said, staring into the emptiness. ‘The only question I have ... is why he took the child after I had struggled so much. This has been so hard for me. I’ve really tried.’

Grey light gleamed off her skin, and some machine, out of sight, hummed incessantly. ‘What do you listen to when you lie awake at night here?’ I asked her.

‘I listen to the rain. Last night, it was raining, I think,’ she said, smiling. ‘I like that very much. But now there is just the sound of the machine. It confuses things.’ She recalled listening to the rain as a child. ‘There were many trees, so the leaves would catch the rain.’ She told me that during the fruit season the children were very happy. ‘The rain would wash the mangoes to the ground.’

Naledi survived, but her child received no burial and was cremated. It was the second child she had lost within a year. Naledi and her mother did not know where the ashes were spread. They wondered, when I met them later — gathered in the small room in the south of the city, sitting on buckets beside the bed with its floral cover — what happens to the spirits of children who die so young. They had no answer. The riddles of living and dying, of why some children survive and others do not, are the more intimate questions of social regeneration in the city.

Amid the losses of the year, the family and friends attempted to mourn and heal. Naledi spent a long time in hospital recovering. In December 2012, after she had returned home, I went to visit her, along with Thandiwe and  Jetro, at City Hives. The windows at the front of the building were smashed, and Naledi’s mother took me into the building. On entering, Naledi smiled when she heard my voice. We sat down and Thandiwe joked that she had almost become a ghost herself. Naledi told me, ‘I really thought those were my last few days. I prayed with God to stay with me.’ Her mother said, ‘We thought she was going to die. I will never forget those days.’

Naledi was holding and playing with Triumph, who, after the difficulties of her birth, was well, although she had been diagnosed with Down’s syndrome. Naledi’s two young daughters were there, and her son, who had cerebral palsy and needed to be transported in a wheelchair. We all chatted for a while, particularly about Naledi’s harrowing time in hospital, and how she was getting better. Naledi told me that she thought she had been bewitched at City Hives. She told me that there was ‘umnyama’ there — meaning ‘darkness’, but also ‘misfortune’ in isiNdebele.

Thandiwe was like a sister to her, she said. She was the first person after her mother that she called when she was in hospital. The solidarity and sisterhood among women was a source of survival amid the harshness of life in the city.

This newly updated, comprehensive history of SA presents the story of our turbulent country in a fresh, readable narrative.
Books
3 weeks ago

'Anxious Joburg' focuses on Johannesburg, the largest and wealthiest city in South Africa, as a case study for the contemporary global south city
Books
1 year ago