Cape Town has 7 out of 10 most expensive SA suburbs 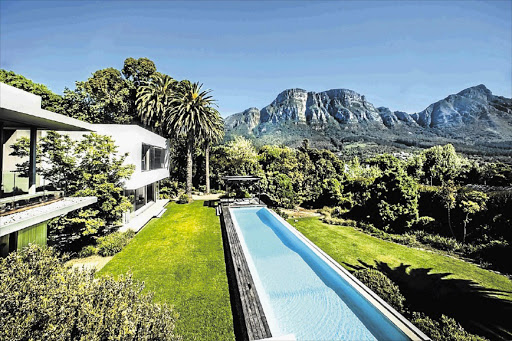 A VIEW TO PAY FOR: Bishopscourt, Cape Town, for R49-million

If there were the slightest concern that the fairest Cape was losing its appeal, a look at the dazzling numbers achieved in property sales in the past year along the Atlantic seaboard, in the southern suburbs and in the Cape Winelands should lay those fears to rest.

Seven of the 10 most expensive suburbs in South Africa are to be found on Cape Town's Atlantic seaboard and in the southern suburbs, according to statistics from property analysts at Lightstone.

From the beginning of 2008 to the middle of this year, buyers have paid a total of R15.93-billion for luxury homes, including 887 properties that have each sold for R10-million or more.

When it comes to trophy homes - those valued at more than R20-million - Cape Town has more than Joburg, even though Jozi is the country's commercial hub. International wealth consultancy New World Wealth says Camps Bay has the most trophy homes in the country, boasting 155.

Knysna, further down the coast on the Indian Ocean, has 133 properties valued at more than R20-million.

The town is followed by the Joburg suburbs of Sandhurst, with 127, and Hyde Park, with 112. Clifton, back in Cape Town, has 98 and Bryanston, in Joburg, has 88.

In Cape Town, there are 86 trophy homes in the suburb of Bishopscourt.

New World Wealth shows that prime property along the Atlantic seaboard, in Clifton, Bantry Bay and the V&A Waterfront, fetch an average of R65000 per square metre - far outstripping areas in Sandton such as Hyde Park, Bryanston and Morningside, where some developments exceed a mere R40000 per square metre.

This year, nearly 40 properties costing R20-million or more each were sold in South Africa - compared with 25 in that price range last year.

Last year, the total spend on trophy homes was R712-million, compared with R1.2-billion this year.

The buyers have mostly been locals and most have paid in cash.

Seeff chairman Samuel Seeff said the most expensive homes were typically bought for cash, with one asset being liquidated to buy another.

Overseas buyers are slowly returning to the market after being hit by the 2008 financial crisis. "Despite our weak exchange rate, they haven't yet got back to the numbers prior to the crash," said Seeff.

Instead, Cape Town's luxury houses are being bought by locals, many of whom are relocating from Joburg, Durban and Port Elizabeth.

Seeff concluded 13 sales for property worth R20-million or more, four of which are among the highest prices achieved in Cape Town this year: vacant land in Clifton for R70-million, a Clifton Road house for R55.86-million, one in Fresnaye for R65-million and a luxury home for R30.2-million in Bishopscourt.

The Pam Golding Property Group also achieved top prices including a Bishopscourt house for R70-million and "lifestyle" wine farms, which sold for R62.5-million in Stellenbosch and R36-million and R34-million in the Franschhoek Wine-lands.

Andrew Golding, CEO of The Pam Golding Property Group, said that only about 4% of all the property buyers in South Africa were from overseas.

These buyers come from countries such as the UK, France, Germany, the Netherlands, the US and China, as well as a growing number of African countries, such as Zambia, Zimbabwe, Nigeria, Swaziland, Gabon and Angola.