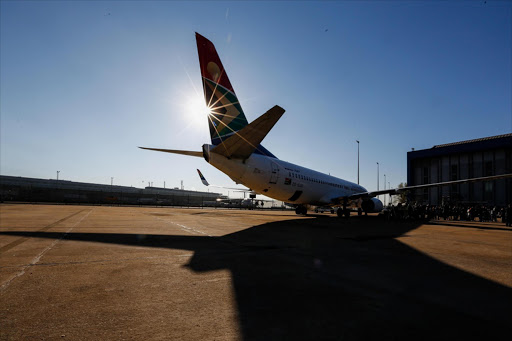 This Boeing 737 operated by SAA made aviation history this week as the first commercial flight in Africa to use jet fuel derived from plant material. SAA and Mango used the biofuel, made from a type of tobacco called Solaris, on flights between Johannesburg and Cape Town on Friday. The plants are being grown in Limpopo by Sunchem SA.
Image: MOELETSI MABE

SAA has put on hold its controversial deal with unknown "boutique financier" BnP Capital to source funding for its R15-billion debt, after questions were raised about BnP Capital's fee and credentials.

SAA spokesman Tlali Tlali said on Friday: "In the light of claims made in the media, SAA took steps to liaise with BnP Capital in an effort to seek clarification.

This means contracting between the parties will be placed on hold pending the finalisation and/or resolution of issues raised."

He said BnP Capital had "conducted no work, and no payment has been effected by SAA".

Government sources said this week that SAA chairwoman Dudu Myeni's decision to pay a R256-million success fee to an intermediary for a service they believe the airline can do itself is heightening tensions with the National Treasury, which oversees SAA.

This week, SAA missed its fourth deadline to submit its financial statements for the 2014-15 financial year. They were due to be tabled in September last year.

The Treasury had given SAA until Friday to submit the statements. When SAA missed the deadline, the Treasury was forced to ask parliament for a fourth deadline extension, to September 15 this year.

BnP Capital won a contract in April as transaction adviser on the restructuring of SAA's debt, ahead of established firms such as Nedbank, Regiments and Deloitte & Touche.

Last week, Business Times revealed that between May 20 and 27, Myeni and four other board members awarded BnP Capital the job of sourcing the funds, for which BnP Capital would earn a R256-million success fee.

This was awarded without going out to tender and even though the Financial Services Board had suspended BnP Capital's licence on April 26.

"SAA issued a letter of award to BnP Capital as a step before entering into a contract," said Tlali.

The FSB confirmed that BnP Capital had its licence suspended for failing to comply with "fit and proper requirements", but declined to specify what these were. The company was rectifying the deficiencies to have its licence reinstated.

A confidential SAA memo seen by Business Times shows BnP Capital advised SAA to urgently source the funds. SAA cited this urgency as justification to appoint BnP Capital rather than going out to tender.

"Due to time constraints the only feasible approach is to engage the appointed transaction adviser to urgently source the funds to settle the loans," the memo said.

The board's decision to award the contract to BnP Capital was made against the advice of SAA treasurer Cynthia Stimpel, who said the job could be done at a fraction of the cost and should go out to tender.

Stimpel sent an e-mail to SAA's acting finance director, Phumeza Nhantsi, warning it should cost R85-million at most, based on a "hypothetical quote" from a banker at Absa.

However, SAA's board ignored Stimpel's advice.

Instead, she was suspended this week for what SAA has said are unrelated reasons, without specifying what they were.

The fallout over BnP Capital also resulted in a senior Nedbank employee, Masotsha Mngadi, being suspended for allegedly assisting BnP Capital on its bid for the SAA contract while he was working at the bank.

Nedbank spokesman Esme Arendse said Mngadi was part of a team of public sector bankers responsible for Nedbank's bid. He remained suspended, and investigations were continuing, she said on Friday.

BnP Capital CEO Daniel Mahlangu said last week that his company was "known in the market".

He denied that SAA appointing his company to implement its own advice was a conflict of interest, and said the airline should respond to questions about its own internal processes.

That BnP Capital does not have a valid licence from the FSB is just one of several red flags with the deal.

Business Times has learnt that Mahlangu's former business partner Vunani Mathebula was included in its bid as a senior project director without his knowledge.

Until recently Mathebula was a senior employee of BnP Capital and a co-director with Mahlangu of BnP Capital Property Holdings, which was deregistered last month.

Mathebula said this week that he had parted company with BnP Capital before it submitted the bid in March.

"I used to work for BnP Capital but I haven't received a salary from them since February. We only use the same office space," he said.

Mathebula said he studied at the University of the Witwatersrand with Mahlangu before they went into business together.

"We did corporate finance, capital raising, that sort of thing. There were some small jobs we did for the PIC [Public Investment Corporation]. Daniel used to work for them."

The bid document states that Mathebula would be the second-highest-paid adviser in BnP Capital's team to advise SAA, with an hourly rate of R2,000 excluding VAT. Mahlangu's rate is R2,500 an hour.

The Treasury did not respond to requests for comment.