Once a beacon in sub-Saharan Africa, Mozambique has been hit hard by scandal and price cycles 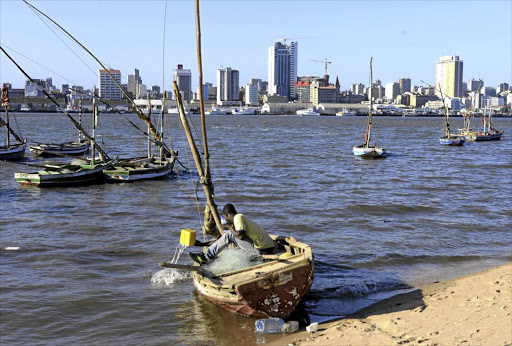 A fisherman bails out his boat in Maputo Bay. Mozambique, ravaged by decades of war, enjoyed several years of economic resurgence after the discovery of gas off the coast, but has again fallen on hard times.
Image: REUTERS

Former president Armando Guebuza testified this week before a parliamentary inquiry into secret state borrowing of close to $2-billion, a debt scandal that has added to Mozambique's economic woes.

Once the darling of investors thanks to natural gas and other resources, Mozambique is now struggling with inflation, debt and reduced growth prospects.

Guebuza, who testified behind closed doors, is seen as a key figure in the scandal that dates from his 10-year term, which ended in January last year.

Between 2013 and 2014, state-owned enterprises contracted massive loans from foreign creditors in a string of transactions hidden from parliament and the public. The two largest, totalling $1.4-billion, only came to light earlier this year, shocking the IMF and foreign donors into withdrawing their support.

News of the two loans was the last straw for foreign donors already reeling from a revelation in 2014 that an $850-million loan had been arranged, without parliamentary consent, to buy a fleet of tuna-fishing boats.

At the IMF's insistence, an international auditing firm is trying to follow the money trail.

The Washington-based body has said Mozambique cannot be allowed back onto its programme with unsustainable debt.

Hit by low commodity prices and low foreign direct investment, the government of President Filipe Nyusi will battle to pay back the trawler loan, which was restructured in March this year as a seven-year government-guaranteed eurobond. The first $90-million (about R1.27-billion) tranche is due next month.

Mozambique has proposed restructuring its commercial debt but bondholders are unlikely to want to do so on friendly terms.

Meanwhile, inflation is set to hit 30%. Food and fuel prices are rocketing and the metical has devalued more than 60% against the dollar over the past year.

"Money is very tight. You have to make sure you get paid in cash or you don't get paid," said Anne Sorensen, the South African owner of a company that sells luxury mosquito nets. "They say it is going to be four years before this thing starts lifting."

Mozambique is pinning its hopes on Italian oil major Eni, which is believed to be poised to begin work on a $9-billion floating gas platform off the northern coast. Capital gains tax from the project could throw a lifeline to the government.

Other major gas projects, including that of Texas-based Anadarko Petroleum, may take longer.

"Eventually gas will transform Mozambique's economy, but the question is when. At best, four or five years down the line," said Victor Lopes, Standard Chartered Bank's senior economist for sub-Saharan Africa.

Mozambique is now one of the most indebted countries in sub-Saharan Africa with a debt-to-GDP ratio that threatens to exceed 100%.

It ran up the debt at a time when confidence in the country was high. Three years ago, multinational corporations were vying for a slice of its sizable energy resources, which include one of the largest untapped metallurgical coal reserves in the world. The Rovuma basin is said to hold gas reserves that rival Qatar's.

Mozambique's annual economic growth of more than 7% was touted as one of the highest in the world.

But then commodity prices crashed, and this year growth is likely to be below 4%.

"When we started off, things were good. Money was flowing," Geocrush CEO Jeremy Davies said.

He said employees had been threatened and equipment seized. "The north is horribly corrupt. It is all controlled by the big boys, the generals have a hand in all of it."

"Commodity prices were high and there were big multinationals who were interested. That has all gone off. It is no longer flavour of the month," he said.

Little said his company had decided to take its business elsewhere in Africa because of excessive red tape in Mozambique.

Business across various sectors of the Mozambique economy have complained about high levels of bureaucracy and corruption that make it a very challenging environment.

"There are investment incentives available, but these are arduous to obtain and require working through bureaucratic hurdles to implement," Jan Vermaak, MD of Omnia Fertilisers international division said.

Omnia has been in Mozambique since 2012.

Despite the challenges, the fertiliser market is seen as a potential growth area and many international firms are vying for a foothold.

Once natural gas production in the north swings into gear it should generate ammonia byproducts that could be used in making fertiliser.

Agriculture, long the mainstay of the economy, remains the biggest potential growth sector. But Vermaak said sporadic violence between government forces and Renamo rebels had driven many Omnia customers from their land in recent months.

Sasol has been piping gas to the local Mozambique market and to South Africa from its gas fields off southern Mozambique for a decade. It has recently been drilling new oil wells close to its current zone of activity and sees its operations as part of a regional energy solution.

The tourism sector could be another growth sector, although hotel occupancy in Maputo has dropped sharply in recent months due to a slowdown in business travel. A number of new hotels have sprung up, leading to a glut of rooms.

"The hotel business will ride it out but they are really waiting for the oil business to come in, and with that the logistics and the supply industries," said Phil Baker, a travel industry expert.

Baker said the price of air travel had dropped, and "life-changing" improvements had been made to infrastructure in and around Maputo.

Several Chinese-built highways now connect the capital to beaches that were previously difficult to get to, and what would be the longest suspension bridge in Africa is planned for Maputo Bay.

The bridge, with a main span of 680m, would dramatically cut travel times between Maputo and Ponta do Ouro.

The coal sector, too, appears to be showing signs of a recovery. Brazil's Vale mining giant has ploughed billions of dollars into building rail links and ports to get coal from the Moatize basin to the coast for export. If these links can be protected from rebel attack, bulk exports will be possible.

"Mozambique is not a situation that has no solution," said Lopes. "The solution is to move forward with the IMF, the gas coming onstream eventually, and better governance."

S&P Global Ratings cut Mozambique's credit rating from CC to C last month after the government announced it would seek to restructure its liabilities. S&P saw this as equivalent to a default. Moody's rates Mozambique at Caa3 with a negative outlook.

IMF officials are now in Mozambique, and talks are being held to restructure the commercial debt. The subtext to these negotiations is the threat of violent food riots of the kind that shook the country in 2010.

With food and fuel prices rocketing, no one knows how long it will be until the patience of the Mozambican people runs out again.