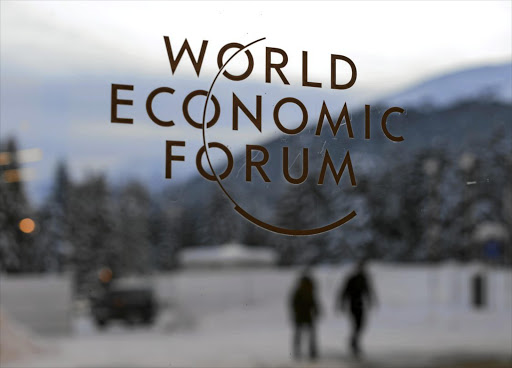 The logo of the World Economic Forum on a window pane at the Congress Centre. The forum's annual meeting in Davos, Switzerland, starts on Tuesday.
Image: AFP

Finance Minister Pravin Gordhan will attend the World Economic Forum in Davos, Switzerland, this week in a far stronger position than six months ago, and without President Jacob Zuma leading the delegation he could live up to the notion that he is the de facto president of South Africa, an expert has said.

The withdrawal in November of flimsy fraud charges against Gordhan and two other former South African Revenue Service officials on the eve of their court appearance had "reinforced the idea if not the reality that the finance minister is the de facto president of South Africa", political analyst Aubrey Matshiqi said on Friday.

Lack of leadership by the president in managing South Africa's economic crisis had created a gap for Gordhan to provide such leadership "in a way that bestowed on him either the perception or reality of being president of South Africa.

However, last year, Zuma did appoint a committee of business leaders led by Gordhan and Telkom chairman Jabu Mabuza to investigate economic initiatives to boost growth.

The annual event is bringing together world leaders and civil society under the theme "Responsive and Responsible Leadership" this year.

Last year Zuma embarrassed the country when he failed to arrive for a panel discussion at Davos. But finance ministers attract as much attention as presidents at these events, anyway.

Political economy analyst Daniel Silke said Gordhan will at least be presenting a picture that South Africa has not been downgraded and that he has survived politically for the past year.

From a global perspective this will mean "he will go with some gravitas attached to him, with some satisfaction that he has steered the ship in very difficult terrain".

Gordhan will not be accompanied by his deputy, Mcebisi Jonas, or National Treasury Director-General Lungisa Fuzile. But the business leaders include Standard Bank joint CEO Sim Tshabalala, MTN chairman Phuthuma Nhleko, outspoken AngloGold Ashanti chairman Sipho Pityana, several mining bosses and UCT vice-chancellor Max Price, many of whom supported him last year in his efforts to avert a downgrade.

block_quotes_start ...questions linger whether Gordhan will survive another year as finance minister, and the threat of a downgrade of SA's investment rating to junk status remains block_quotes_end

Matshiqi said Gordhan, who stepped into the role for a second stint in December 2015 after the dramatic four-day replacement of Nhlanhla Nene with Des van Rooyen, was on a firmer footing this time.

Also indicative of Gordhan's strength is the support he has received from the business community, which has rallied around his plans - to inject growth into an economy expected to have grown by less than 1% in 2016 - and the CEO Initiative .

Elna Moolman, an economist at Macquarie Group, said these initiatives - including an internship programme to absorb more young people into the job market and a funding plan for small businesses - had gained considerable traction.

The initiatives and the Treasury's commitment to cut high public spending and debt and to grow the economy played a key role in preserving the investment-grade rating.

"The momentum with the CEO Initiative's programmes and the ratings agencies' decisions to preserve South Africa's investment-grade credit ratings underscore the stronger position of Minister Gordhan as he goes to Davos this year."

But questions linger whether Gordhan will survive another year as finance minister, and the threat of a downgrade of South Africa's investment rating to junk status remains.

Silke said: "He is not going to be able to rest completely, given the deep factional divisions within the ANC and the jockeying for positions and succession battles that will influence all aspects of the ANC [ahead of its elective conference in December].

If South Africa fails to pull off projects meant to grow the economy, improve labour relations and address other concerns, it could trigger a downgrade, which would also threaten Gordhan's tenure.

"It's more of the same for Pravin Gordhan. It's another awkward year for him," Silke said.

But Matshiqi said the ANC would largely focus on its succession race, with a resultant paralysis of policy-making and implementation.

"But paralysis is not completely a bad thing, because it may create opportunity in some parts of the state for people to do what they believe needs to be done as the ruling party is focusing on the succession battle."