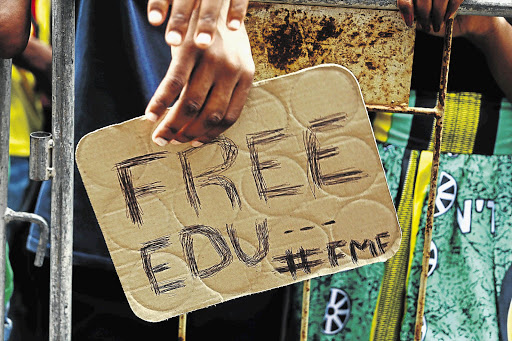 OUT OF THE BOX: Some 2000 students took part in a march through the Durban CBD yesterday as part of #FeesMustFall protests.
Image: THULI DLAMINI

Treasury appears to have put the nail in the coffin of a graduate tax‚ saying the funds raised would not be nearly enough to cover the running costs of South African universities.

Finance minister Pravin Gordhan‚ however‚ did announce an additional R5 billion in funding‚ in addition to the R32 billion announced in last year's budget‚ to be made available by 2019.

Gordhan said “government is determined to address the challenges identified in post-school education and training in a phased manner. Resources will be taken into account in determining the pace with which these can be addressed.”

While his speech outlined the need for “universities‚ students and education stakeholders to share responsibility for access and quality and the diversity of higher education provided”‚ the budget review document outlines how a graduate tax would be unlikely to assist with the financial needs of the higher education sector.

The document states that “several groups have put forward the idea of a graduate tax to be levied directly on all university graduates. The idea offers several potential advantages‚ including effectively targeting private returns to higher education.”

However it says that Treasury estimates that if the tax were levied on each new graduate‚ around R200 million would be raised.

If it were applied to all of South Africa's graduates‚ it could generate around R3 billion annually - a fraction of the R59.8 billion spent by the country's 26 universities in 2015.

Director-General of the Treasury Lungisa Fuzile said in a press conference ahead of the budget speech that government had “pumped an enormous amount into higher education” but “difficult conversations” needed to be had about inefficiencies in the education system.

“We can't keep pumping money into a system that falls short in providing the skills we need. Are we getting the best we can for every rand we spend in education? People are spending an extra year or two (in education) taking up resources intended for their younger siblings.”

Gordhan said in the same press conference that “we have done the best we could in the current fiscal environment”.