Liberty: it's not an abyss, it's a storm shelter 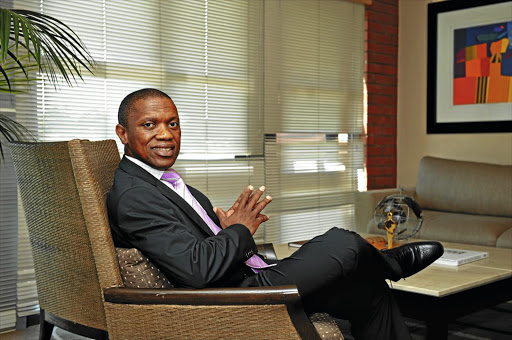 WORRY LIST: CEO Thabo Dloti says the wisdom of his decisions will be known in the longer term.
Image: RUSSELL ROBERTS

Standard Bank owns 55% of Liberty and Dloti admits there have been some very frank exchanges between him and his majority shareholder.

Harsh words have been spoken, he says.

"Like all boards, when you deliver profit warnings nobody is happy about that. So there will be harsh words for everybody around to say: 'Guys, how did we land here? Let's understand it better. Are we comfortable that everything we needed to do has been done?'

"So that has happened, as you would expect."

In addition to harsh words, Standard Bank joint CEO Sim Tshabalala has said it will be introducing a 10-step turnaround strategy to help its junior partner.

"They're saying: 'How do we make sure we restore the ROE [return on equity] you were generating before, so that you can continue contributing positively to the group?'" says Dloti.

He blames the economic environment and cyclical nature of the business for the poor results.

"The way the insurance cycle works, you go through the dips and you come out the other side."

This would sound more convincing if Liberty hadn't been so noticeably outperformed by its peers, which have had to manage the same external factors.

Dloti says he has positioned Liberty to meet what could be even more stringent economic conditions ahead. This has hurt it in the short term.

"We've taken tough steps that have had a much more significant impact on our earnings than our competitors have had," he says.

"A whole bunch of people" were taken out of its underperforming health business.

It underwent a very costly withdrawal from its poorly performing business in South Sudan.

This policy of conservatively positioning its balance sheet, as an analyst put it, contributed to Liberty's poor results, says Dloti.

His competitors chose not to go this way and achieved noticeably better results.

Did he get it wrong, perhaps?

"You only know that with these long-term businesses when you come out the other side ... So it's early stages for one to call that," he says.

"Clearly, based on our 2016 earnings we're showing a worse outcome for the actions we have taken in managing the tough environment. We've taken the tough action that we needed to."

His competitors have outperformed him "because they've taken different decisions, and their results show that".

He refuses to acknowledge that Liberty is in a deeper hole than its competitors because of poor decision-making.

He believes the economic environment is going to get worse. And because his actions have strengthened its reserves, Liberty is well positioned for this, he says.

"Structurally I am making sure I can operate a business in this environment."

He could be wrong "but if I'm right, it means I've taken the pill now and our results will normalise".

He refuses to speculate on whether South Africa's credit rating will be downgraded to junk later this year.

"It's not my business to do that. But I've taken strong measures to ensure that if a sovereign downgrade happens we don't hurt further. We're on high alert for that. It is high on our worry list."

Something else that is high on his worry list is Liberty's adventurous African policy. It is growing its businesses in 18 African markets in the health, insurance and asset management sectors.

He acknowledges the risks but says Liberty has been careful to try to mitigate them.

Liberty is not investing in African countries "afresh" so much as growing businesses that are already there, he says. Only Nigeria and Ghana are new.

It has also been careful to start small.

"Seldom in any of the markets we're entering are we buying a large entity, because we've seen the risks of biting off too much. We hope that will contain the losses if anything happens that we haven't foreseen. It's a strategy that allows us to take risks that hopefully we can manage."

Also, it is sticking close to parent Standard Bank and is leveraging off the bank's African experience.

"They're running well ahead of us in Africa and we're working with them very closely for all the risks we are taking. In all the markets we're in we rely a lot on their knowledge base."

Having said all that, however, he admits that doing business in Africa keeps him up at night.

"The risks we're taking in Africa are different to everything I've grown up with. I grew up in this industry, I understand it. But there are new risks that obviously are keeping you wide awake at night because you don't know how to deal with them until you walk through them."

The list of South African companies that have come a cropper in Africa is a long one, headed by MTN. Liberty has had to extricate itself, at great expense, from South Sudan after four years of costly failure.

Dloti was not yet CEO when Liberty went into South Sudan. But he was head of strategy for the group and accepts responsibility for driving the decision.

A bit ambitious, not to say foolhardy, given that Sudan was an absolute no-go area for tourists for years?

"In hindsight it's easy to say that. It was a profitable venture. Unfortunately, the political situation turned sour."

For all the risks, the potential profits to be made in Africa cannot be ignored, he says.

"You can't grow by just being in South Africa."

The middle-income segment in South Africa offers prospects for growth, but it's a highly competitive market and the margins are thin.

"The premium growth we're achieving in our African markets is 35% compared to 5% in South Africa."

The South African market is saturated.

"We need a growth market. In the long term we can't be a one-trick pony where we're relying on the retail affluent market in South Africa for our sources of value. We have to get into other markets and learn how to extract value for our shareholders from those markets."

But there's a reason it's keeping him awake at night. Businesses in Africa tend to go pear-shaped very quickly. One senses Dloti would not survive long if this happened to Liberty.

Dloti, 47, is bright and dynamic and has a record of extraordinary personal achievement. He went to school in Matatiele in the Eastern Cape where it became evident that he had an unusual aptitude for maths.

While doing his matric he applied for and was granted an Old Mutual bursary. The company put him through post-matric at Michaelhouse in KwaZulu-Natal, and a degree in business and actuarial science at the University of Cape Town.

At the age of 34 he was made CEO of Old Mutual Asset Managers with responsibility for assets of about R350-billion. Only one fund manager in South Africa was more powerful than Dloti, and that was the then head of the Public Investment Corporation, Brian Molefe.

Dloti was appointed CEO of Liberty in 2014 when it was South Africa's third-largest insurer. Now it is No4 .

Within the group there have been mutterings about his leadership and some of his appointments for some time. Analysts are questioning if he can dig the group out of its present hole.

He believes he can.

He points to Liberty's performances before 2016.

But was this due to his leadership or to the management legacy he inherited?

"We've all had the comfort of strong markets," he says.

"It's not about legacies but cycles. The cycle I am experiencing now my predecessors did not experience. I and my team have had a monstrosity of a task. Somebody had to do it and we're doing it. When the cycle turns and the market grows strongly again, you'll see a different outcome."