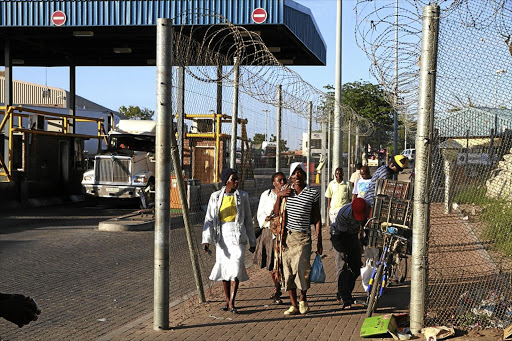 The struggling Zimbabwean economy may be dealt another heavy blow if Pretoria does not agree to extend special permits that allow Zimbabweans to work legally in South Africa.

Home affairs spokesman Mayihlome Tshwete said this week that Home Affairs Minister Malusi Gigaba was expected to announce any changes in the cabinet position on Zimbabwe special permits (ZSPs) before the end of the month, although all indications are that there is no room for extension.

When the permits were introduced in 2014 it was said they would expire at end-2017.

Zimbabwe dreads the effect on its economy as remittances from its citizens working in South Africa make up 34% of total remittances. At its peak in 2014, Zimbabwe's overall remittances topped $1.2-billion (about R15-billion).

The drop in remittances has been linked to "a result of poor global economic performance, depreciation of the rand and the prevalence of informal channels of transfer despite a 3% incentive for using formal channels".

But economist Eddie Cross said the Reserve Bank's figure on remittances was conservative and did not reflect the true activity taking place on the ground. "Real remittances are about $3-billion a year - the majority of this from South Africa. These inflows are critical to Zimbabwe. It is estimated that $1.2-billion goes into the education sector alone. The stability of the South African diaspora is vital."

Cross said South Africa had more foreign workers than any other African country and could not afford to play down their role in its economy. "Their [foreign workers'] contribution to the South African economy is massive - they include 600000 professionals from Zimbabwe."

Meanwhile, Ignatius Chombo, Zimbabwe's home affairs minister, was a participant at the International Migration Conference hosted by the Department of Home Affairs in Sandton, which started on Friday.

The two-day conference was attended by home affairs ministers from Zimbabwe, Namibia, Lesotho and Swaziland.

Chombo said the conference was an opportunity to engage Gigaba on the ZSP permits issue. It is not clear if Chombo and Gigaba would hold a one-on-one meeting.

The current dispensation was to expire on December 31 2017, said Chombo. "Indications from our embassy in South Africa are that minister Gigaba is expected to announce the cabinet position on the review of the ZSP.

"Expectations are that South Africa is unlikely to extend the ZSP and holders of these permits will be expected to apply for alternative permits while in Zimbabwe," Chombo said.

Holders of the permit are estimated to number about 242731. When the permits expire, those who wish stay in South Africa will have to apply for standard study, work or business visas.

Applications have to be made in Zimbabwe - a process that takes several weeks to complete - at the Harare or Bulawayo offices.

About 1.5million Zimbabweans are estimated to live in South Africa.

Political observers expect that when the special permits expire in December there will be mass deportations, which could lead to a deterioration in diplomatic relations between the two countries.

"The deportations of thousands of Zimbabweans will add to the economic woes in Zimbabwe and without doubt further raise the political pressure on President Robert Mugabe," said Rashweat Mukundu, chairman of think-tank the Zimbabwe Democracy Institute.

"South Africa may be forced under the circumstances to review its migration policy on Zimbabwe to manage the political pressure in Zimbabwe," he said.