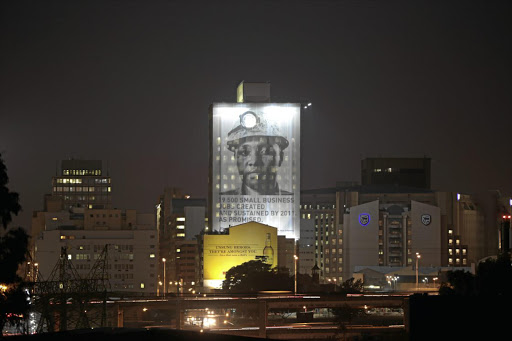 A photograph of a miner adorns the Anglo American building in Johannesburg. Anglo's shares have risen 138% over the past 12 months.
Image: GETTY IMAGES

This week's surprise move by Indian mining tycoon Anil Agarwal to acquire the second-biggest shareholding in Anglo American has again raised questions over the future of the 100-year-old group.

Struggling from sluggish commodity prices and difficult operating environments in South Africa, the miner has remained the subject of takeover speculation since a failed "merger of equals" proposal by the now-defunct Xstrata Resources eight years ago.

Last year, the miner had put a significant number of its assets on sale to pay down crippling debt that had piled up during the China-driven super-commodity cycle.

However, markets have since changed, and the asset sale has been put on hold after a pick-up in the commodity cycle yielded cash flows to some of its bleeding businesses.

Agarwal, who is buying the $2.4-billion stake of 12%, is set to become the second-biggest shareholder after the Public Investment Corporation (PIC), which owns 13.5%.

While the investment may not get him a seat on the board, it puts him at the forefront of any big decision- making. It's a seat critics argue is in effect rented as he isn't buying shares with his own money, but borrowing from bond investors at a coupon rate of 4.125%.

In essence, he gets to hold Anglo shares until the bond matures in three years, receiving no upside from a rising stock price.

In response to e-mailed questions from Business Times, Agarwal said he would not favour any moves to try to break Anglo American into South African and international arms as he believed the group's strength lay in both businesses.

"I like Anglo's entire balanced portfolio, both in South Africa and elsewhere. I believe Anglo has several world-class assets, including De Beers," Agarwal said.

He said he was "fully supportive of the board, management and strategy". What attracted him to the company was its strategy, and he believed the business had significant upside, especially as the team executed its business plan.

For the next six months, Agarwal may not make any takeover bids for the miner.

But given that just last year he had tried to merge his businesses with Anglo American and failed, analysts say there is no telling what his moves will be after the period.

The Agarwal family trust, Volcan Investments, owns 69% of London-listed Vedanta Resources, which in turn owns Vedanta and Hindustan Zinc. The company has oil, zinc, aluminium, copper and iron ore in its portfolio through other interests.

"We do believe that the intent is to seek some form of alliance or merger between Anglo American and Vedanta, ideally in a friendly way so as to avoid any massive price premia," HSBC analysts, David Plemming, Derryn Maade and Emma Townshend, said in a research report released earlier in the week.

The companies had different assets in different parts of the world. So a merger was unlikely to be supported by Anglo, the report said.

However, Agarwal could use his advantage to form an alliance with other shareholders and put pressure on Anglo collectively.

An analyst, who did not want to be named, said there were no synergies, and if there were any they would be really limited.

"In the past, he [Agarwal] has tried to take over a copper-mining business in Mexico so I know he is quite keen on diversifying his business and expanding his empire. That could be the main reason he is interested," said the analyst.

"This is the first time he has done this kind of move, but he will work it out. He is a very patient man. He does not rush. He will wait for an opportunity, so even if he will have to wait for one or two years before he gets what he wants, he will do it," the analyst said.

Anglo said it had not engaged with Agarwal yet on his interest in acquiring a stake, but if the two had talks about the investment, then it would interact with Volcan "as we would with any other shareholder".

Izaq van Niekerk, analyst at Mergence Investment Managers, said it was not clear yet what Agarwal's plans were, but they depended on what Anglo did with Kumba Iron Ore and its coal assets.

"For him to try and take over South African assets would complicate things because they (Volcan Investment) have South African assets in Vedanta so then it's kind of reversing the work Cutifani has been doing in trying to get Anglo's exposure in South Africa down - so it's all pure speculation what his plans are at the moment," Van Nierkerk said.

Anglo American currently has 25% of its asset base in South Africa, and the country contributed 7% to its revenue in its last reporting period, according to Bloomberg data.