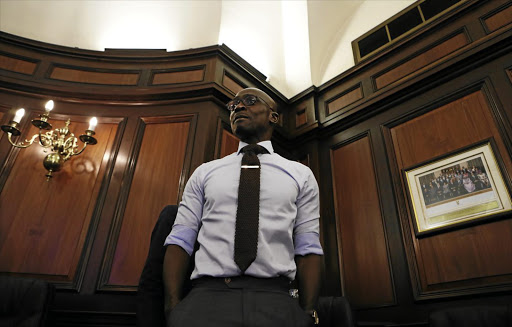 Finance Minister Malusi Gigaba after briefing the media on Tuesday ahead of his trip to Washington D.C.
Image: PHILL MAGAKOE

Pioneer Foods is the first confirmed corporate casualty of South Africa's credit-ratings downgrade. The food giant has announced the collapse of a deal that would have created Africa's largest consumer goods company.

Immediately after the announcement of the downgrade "everything just stalled", Pioneer Foods CEO Phil Roux said on Friday.

"Panic ensued and news flow was terribly negative abroad and consequently they [the multinational] advised that while they are a massive organisation they just cannot, given the state of investment required, deepen their risk in any shape, manner or form," said Roux.

The share price of Pioneer, the second-largest fast-moving consumer goods group, fell as much as 7% after the announcement on Friday.

The stock recovered somewhat to end the day 4.4% weaker at R169.

Roux, who is under a nondisclosure contract, could not name the multinational or the value of the investment but said that before the downgrade, the company was optimistic about South Africa's prospects.

The parties had finalised 95% of the deal, including the contractual agreements and pricing.

As a result, Pioneer Foods curtailed six capital investments planned for the country "until confidence is restored with us as businessmen, that this is the place where you can get the desired return that you need".

South Africa's foreign-currency debt was downgraded to junk by S&P Global Ratings and Fitch after President Jacob Zuma's cabinet reshuffle, which involved the removal of finance minister Pravin Gordhan and his deputy Mcebisi Jonas from Treasury and the appointment of new Finance Minister Malusi Gigaba.

The downgrades came within a week of each other after Gigaba's appointment, with Fitch taking the further step of downgrading South Africa's local-currency debt.

Foreign investors "may be hesitant to invest in South Africa and that would be a depressant on M&A".

However, said Cron, if the rand weakened in the near future South Africa could become an attractive investment destination for those who wish to take a "longer-term view of the country and continent".

With economic conditions expected to get tougher, companies would struggle, which might offer buying opportunities to companies looking to expand or get into particular sectors.

South Africa has been a good investment opportunity as many multinationals see the country as the gateway to the rest of Africa.

Norton Rose Fulbright was approached on Friday morning by a "major private-equity fund for a potential deal with a South African company", which Cron said indicated deals were there to be made for investors with a risk appetite.

ENSafrica chairman Michael Katz said it was still seeing deals being done and coming in but most were South African with no foreign element.

It was difficult at the moment to identify what impact the downgrade would have on M&A in South Africa, Katz said, but there were M&As in the private-equity field.

"In the equity-capital market there seems to be quite a bit of interest and we have been approached by foreign players to work with them on some equity-capital transactions."

South African companies could also go through a period of distressed sales if economic conditions worsened. Several economists revised their growth forecasts downwards after the decisions of the ratings agencies.

On the chances of the Pioneer transaction being revisited if South Africa emerged from junk status, Vunani Capital Markets equity analyst Anthony Clark said: "Potentially, yes, but given how long it takes some countries to get out of junk, no company is going to wait that long.

"They [Pioneer] were looking for springboards to enter the European market. I think this transaction would have given them that, but the government's intervention has caused fright in international capital markets and as such their ability to raise capital offshore has been extinguished."

Roux said Pioneer would reconsider South African investments. "We will use this as an inflection point to revisit and make some conscious decisions of where we wish to invest next. We will remain particularly cautious about deepening investment in South Africa amidst instability."