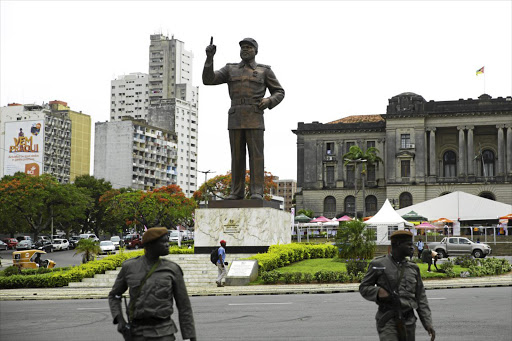 GUARDED: The statue of Samora Machel, the first president of the Republic of Mozambique, stands on a square in central Maputo. Three state-owned companies mysteriously racked up billions in debt without government guarantees
Image: GETTY IMAGES

Mozambique, Africa's largest natural-gas producer, edged closer on Friday to finding out how a $2-billion (R27-billion) debt was accumulated from 2013 to 2014 by three state-owned companies without government guarantees after the submission to authorities of an audit report on its debt crisis.

The report, delayed three times, was compiled by the London-based forensics firm Kroll Associates and was due to be handed over to the Mozambican attorney-general's office (PGR) on Friday.

The findings will serve as the basis on which the International Monetary Fund (IMF) will resume a support programme to the country.

The IMF pulled out of Mozambique in April last year after the scale of its hidden debts began to emerge.

The debt represents a third of Mozambique's GDP of about $6-billion.

The Mozambican economy has been buffeted by economic headwinds such as slow economic growth, two missed loan repayments ($119-million in January and $60-million in March), depressed prices for natural gas and a weak currency.

The Mozambican metical was relatively stable on Friday, trading at 61.91 metical to the US dollar according to Bloomberg data.

The audit report would also be the basis for any prosecutions that would be instituted by the PGR against officials implicated in the deals.

Nick Branson, senior researcher and analyst at the London-based Africa Research Institute, said it was unclear when the audit report would ultimately be made public and raised concern about the public's interest in the debt crisis.

"But one would expect the Swedish embassy, which is funding the report, to support transparency and ensure that an executive summary is made public," he said.

Alexander Booth, associate managing director for investigations and disputes at Kroll Associates, did not respond to e-mails and calls for comment on the audit report.

Maputo-based media news agency Zitamar News reported on Friday unnamed sources at the Swedish embassy as saying that they expected "to receive a censored version of the report on Saturday", omitting the names of anyone Kroll had found to be involved in wrongdoing.

The PGR is expected to have meetings next week with IMF and Swedish embassy officials to explain why the names of people implicated were being omitted from the report.

Joseph Hanlon, a visiting fellow at the London School of Economics, said that although the report would be handed over to Mozambican authorities it could take up to three months before an executive summary was released to the public.

"A redacted version will be issued by the PGR, which has 90 days to do this, to allow it to launch its own investigations and prosecutions.

"It is a condition of the agreement and of any future IMF programme that this be issued. It will include the terms of reference, but will most likely not include any names and otherwise should be complete.

"The full version with names will remain secret, but will probably eventually leak," he said.

The findings are certain to bring political pressure to bear on President Filipe Nyusi, who also faces a party congress later this year and has his eye on a second term.

Any inaction from Maputo's rulers over the audit would unnerve foreign investors, while dealing with a strong hand against those implicated would politically alienate Nyusi from the ruling party.

Meanwhile, Frelimo's central committee announced that it would hold an extraordinary session at the end of this month to "discuss the state of the country and the party".

The timing of the session has raised eyebrows among political observers on whether the political elites in Frelimo were congregating to dumb down the audit report's findings and also come up with a party position ahead of any explosive details emerging in the report.

Frelimo said in a statement, however, that the extraordinary session of the central committee was also "an event in preparation" for the party congress in September.

Last month, Frelimo used its parliamentary majority to retrospectively provide the government guarantees for the three loans by Ematum, ProIndicus and MAM.

This means that the loans, previously found by an administrative court to be illegal, are now legal.

Article 179 of Mozambique's constitution requires that the legislature be consulted on any loans that are secured by the government.

But, in the case of the $2-billion debt, the legislature was not consulted.

The move to legalise the loans angered opposition members of parliament who said that the government was passing the debt on to taxpayers instead of holding to account those involved in the deals.

Carlos Agostinho do Rosário, the prime minister, told legislators earlier this month that the state would honour only debts that were taken out in the interests of the public.