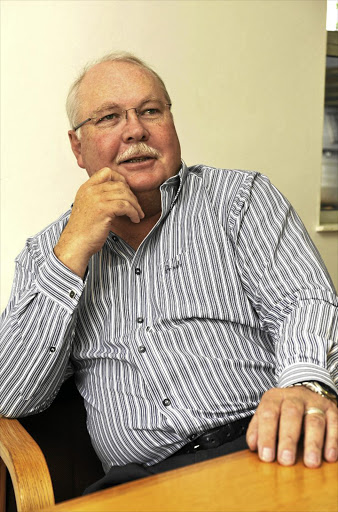 Chris Schutte has been in the industry for 35 years.
Image: TMG ARCHIVES

The industry has been hard hit by drought and dumping, and threatened by Eskom with power cuts because municipalities are in arrears with their payments.

This would have brought poultry companies like Astral to a halt, so this month it obtained a high court order allowing it to pay Eskom directly for its usage and not the Lekwa municipality in Standerton, which owes Eskom R300-million.

"So at least now Eskom will get 50% of what the municipality owes them, and as long as they do they won't cut off the supply of electricity to the town," says Schutte.

The problem now is the price of electricity, which he believes is excessive, given that Eskom has a surplus.

The poultry producer has announced a 54% drop in earnings for the six months to March. It has reduced production, meaning fewer shifts and smaller pay packets.

Rainbow, one of the oldest and strongest brands in the country, has closed 13 farms and half a factory, while other companies have cut back on operations. Fourteen have closed down in the past three years and thousands of jobs have been lost.

Earlier this month the government announced that the industry was in crisis and that export markets would have to be developed to save it from collapse. But Schutte says government inaction has contributed to the crisis.

"We've warned them in many conversations over the past four years. There was always the idea we are just moaners, we just complain, but then you go to SARS [South African Revenue Service] figures and see what has been imported."

Fifty percent of poultry available in South Africa has been imported, Schutte says.

"And that's an opportunity cost. You're creating jobs in the EU and destroying jobs here."

Only now that companies are closing has the government "woken up to the idea that we're not bluffing about a crisis, it's a reality".

The government responded by bringing in a 13.9% protective tariff in December, which Schutte says is wholly inadequate.

For political reasons the government has refused to increase this, but hoping that export markets will save the industry is naive.

"Where do you export to? Who wants our chickens?"

"Other countries produce for their local consumption," he says. "That's why their industries are protected. We're the only unprotected country in the world."

The EU says its farmers are more competitive and that people like Schutte are just whiners who need to get more efficient.

"There's a difference between efficiency and competitiveness," he says. "America is cost competitive but we're more efficient."

Seventy-four percent of the input costs of local poultry companies is feed. Even without the drought, during which local input costs more than doubled, US farmers pay around R1500 a ton less for their maize (corn) and soya than local chicken producers.

He claims that overseas markets use phytosanitary measures cynically to block imports "from anywhere they want to block", including South Africa.

The EU says South African chickens are given growth hormones that are banned in its countries.

"That's the game they play. Our efficiencies come from genetic selection and good farming practices. We emphatically state there is no growth hormone in any of our chickens - and we're open to any audit."

The EU spreads this "myth" because Germany, Holland and England have been found guilty of dumping by the International Trade Administration Commission.

"So we must take action on our side and have an anti-dumping tariff."

The local industry has asked for 37%. How is it in the interests of local consumers if their chicken is suddenly 37% more expensive?

Schutte says imported chicken is not much cheaper for consumers.

"It is sold cheap to an importer and then sold to local consumers at 10c or 15c below our price. They're not importing cheap to pass it on to consumers. They import because they're opportunists."

South Africa's big retailers say they're committed to supporting the local industry but local producers are pricing their fresh chickens too high.

Schutte says his prices have gone up 1% in the past 18 months.

He stops short of saying they're being screwed by the big retailers, but says they are "hardcore, ruthless negotiators".

He adds: "They want the best deal. Chicken is their biggest drawcard. The guy who's got the cheapest chicken is going to draw more feet."

Producers have little room to manoeuvre, he says.

Thanks to dumping, there has been an oversupply of chicken for at leastfive or six years, he says.

However, in spite of his woes, Astral's share price is up around 22%.

And although the water crisis in the Western Cape - where the company has 45 farms - is forcing him to invest in boreholes, the drought has been broken in the prime maize- and soya-producing areas in Mpumalanga, where Astral's poultry production and processing business is based.

Feed costs have dropped considerably and analysts are predicting a bumper profit in 2018.

"We like this space," Schutte says. "But we want quid pro quo, the same deal as the EU.

"They control their borders, they use every measure to block chicken from outside. So should we."

Even a 40% tariff wouldn't be high enough, he says.

"I'd like quantitative measures. What we can't produce we can import."

Does any industry deserve to be cosseted in this way?

If dumping continues at the present rate, with the equivalent of more than eightmillion incoming chickens a week undercutting local production costs, then companies will continue to close, he says.

Bigger companies will mechanise to save costs, which, together with increasing consolidation in the industry, will lead to the loss of thousands more jobs and endanger the country's food security.

"You'll end up with two or three large poultry companies and the rest of the chicken will be imported."

Astral is a feed manufacturer and sells day-old chicks to the independent market, "so we can see who's closing down or cutting back".

He believes the current crisis is the result of years of soft negotiating by South African trade teams.

Our mediators have not been as good as their EU counterparts, he says. They could have driven a much harder bargain.

"After 1994 we wanted to be everybody's best friend. We started to negotiate and do deals from an export point of view and not look at the situation from a vice versa point of view. I think we can be sharper."

Schutte won't say that the export strategy the government has announced it is working on with the South African Poultry Association is deluded, because Astral is part of it.

"But South Africa's never going to be in a position to become globally cost competitive.

"There might be pockets of opportunity where you can export, but to go and build an industry here focusing on the export market is not going to fly."

He says his concern is that the government will think exports alone will save the industry.

But, he says: "If we're not subsidised and our input costs are higher than other countries', how are we going to compete globally?"

Schutte, 57, has been in the industry for 35 years, beginning as a poultry shed worker after completing his national service.

He says a marketing campaign to get South Africans to eat more white meat and less of the legs and wings that are dumped because the Europeans and Americans don't want them, won't help either.

"If you grow a chicken, you have to sell the whole chicken. If I create additional demand for breasts, what will I do with the wings?"

Exporting them won't work, he says.