A week of desperation: Inside Robert Mugabe’s fight to stay in power 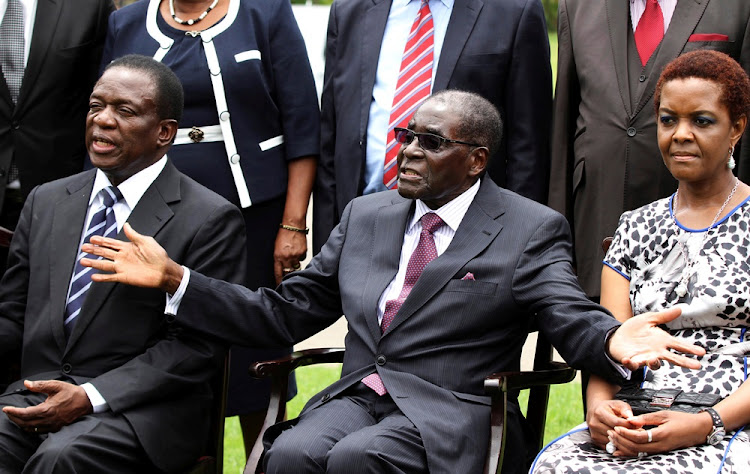 It was 4 a.m. on November 15 in the Zimbabwean capital of Harare. After gunshots had shattered the quiet of the night many were alert.

Troops commanded by Constantino Chiwenga, the head of the armed forces, had rumbled into the city and quietly surrounded the main camps of the police,presidential guard and secret service. President Robert Mugabe was confined to the Blue Roof, his mansion on Harare’s outskirts. Some loyalists were arrested.

“We wish to make it abundantly clear that this is not a military takeover,” he said.

Robert Mugabe's son‚ Chatunga Bellarmine Mugabe‚ is undoubtedly licking his wounds on Wednesday after his father stepped down as president on Tuesday.
News
3 years ago

That statement revealed the plotters’ Achilles heel in their effort to unseat Zimbabwe’s ruler of 37 years. Because the military didn’t want the action to appear to be a coup, it took six more days to get Mugabe out of office via public pressure, impeachment threats and hours of backroom cajoling.

The military and its backers knew that in recent years, the African Union, the continent’s intergovernmental forum, had suspended countries where the army has overthrown the government.

Just as important, perhaps, 93-year-old Mugabe had helped lead Zimbabwe to independence in 1980 and was still a revered figure, particularly within his party. Even after he had run the economy into the ground and ordered brutal crackdowns on his own population.

That hesitance gave Mugabe, a master tactician, leverage. In the days that followed, he had an emotional breakdown, gave a cryptic speech disputing the army was in charge and even presided over a university graduation ceremony, all as his opponents despaired and the world watched.

This is the story of those days.

Events started to spiral out of control on November 6, when Mugabe favoured his wife, Grace, 52, after a years-long succession battle. He fired her rival, Vice President Emmerson Mnangagwa, and brought a power struggle between two factions in the ruling party, the Zimbabwe African National Union-Patriotic Front, to a head.

Mnangagwa, 75, had served in Mugabe’s cabinet for much of the time since independence in 1980. For long periods, he was in charge of the security and intelligence services, the very instruments Mugabe had used to shore up his power. Over the years, many of Mugabe’s opponents had mysteriously fallen victim to a fatal accident. Now, hours after he was fired, Mnangagwa fled the country.

Zimbabwe beware: military is looking after its own interests, not democracy

November 2017 will go down in the history of Zimbabwe as the beginning of the end of Robert Mugabe’s 37 year tyranny. A tumultuous week finally ...
Opinion & Analysis
3 years ago

But he’d developed a fierce reputation and a nickname to match it: The Crocodile. Within the party, his supporters became the Lacoste faction, a play on the clothing brand’s crocodile logo.

While Mnangagwa was away, Chiwenga stepped to the fore. He informed US and Chinese officials of his intentions to force Mugabe to step down, according to people familiar with the matter. On November 13, Chiwenga told reporters: “The current purging which is clearly targeting members of the party with liberation backgrounds must stop forthwith.”

The next night, he struck. While soldiers and tanks controlled the streets, Mugabe and the generals negotiated in his suburban home.

On November 15, Guinean President Alpha Conde, currently the head of the AU, said he “condemns in the strongest terms what appears to be a coup d’etat”, a clear warning that the military would need to be careful in how it proceeded.

South African government ministers flew in to negotiate with Mugabe and Chiwenga, leaving with the impasse unresolved.

Mugabe’s political backing crumbled all at once. On November 15, the Zimbabwe War Veterans Association, which serves as a sort of mouthpiece for senior people in the army, called for Mugabe to be removed.

Mugabe and Chiwenga, both Catholics, chose Jesuit priest Fidelis Mukonori to mediate between them. As the talks dragged on, on November 18 thousands of people flooded Harare’s city centre to send a message to the man who had gone from liberation hero to ruthless despot. 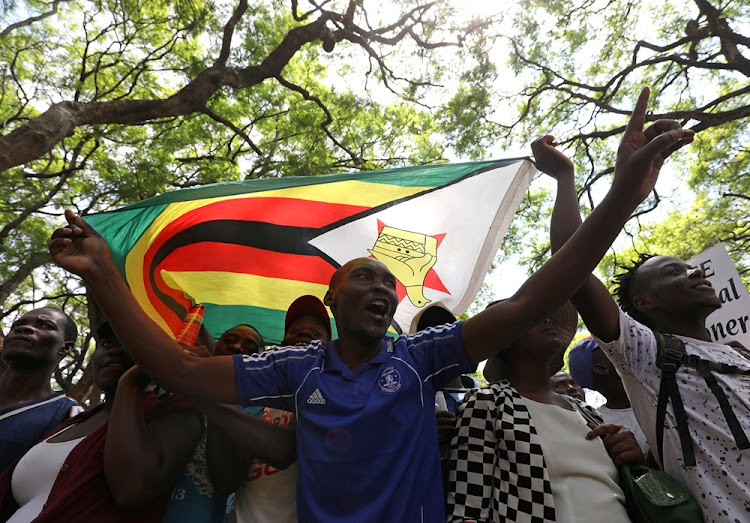 They cheered Chiwenga, swarmed the tanks and took selfies with the soldiers. With typically Zimbabwean humour, at least one poster had a clear message for Grace: “Leadership is not sexually transmitted.”

“This is it, he must go,” said Ronald Mupfumi, a 29-year-old unemployed graduate who joined the throng in Harare’s streets. “These guys made us suffer for a long time.”

At times during the talks, Mugabe’s emotions got the better of him. He had always been alive to potential threats to his power, but he was now stunned by the ease with which he had been captured. At times he broke down, calling for his first wife, Sally, who died of cancer in 1992, and his son Nhamodzenyika, who died aged three from cerebral malaria in 1966, according to people with knowledge of the matter. 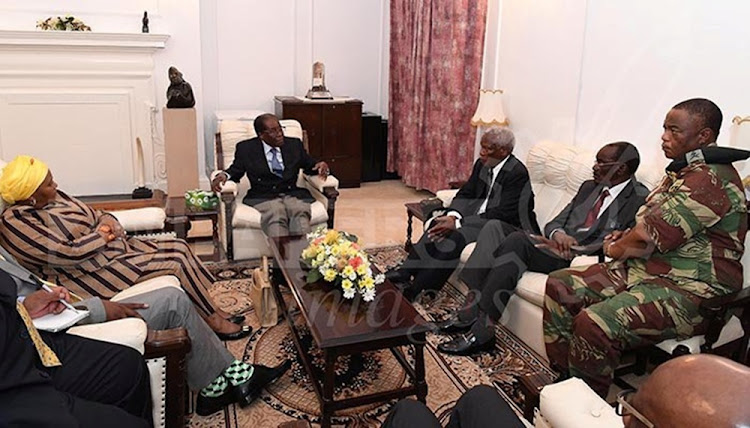 The Jesuit priest assisting him during the discussions had to remind Mugabe to eat and bathe, they said. Grace, a bold public presence over the last few years, was out of sight.

On November 19, the shifting balance of power flipped the ruling party, which had only just endorsed Mugabe’s dismissal of Mnangagwa. Now, all 10 of the Zanu-PF’s provinces voted for Mnangagwa to replace Mugabe as party leader. Grace and some of her supporters were expelled and, the party said, should be prosecuted for their involvement in corruption.

It again appeared Mugabe was done for. His age was showing. When he appeared on national television that night, sunken into a high-backed chair, flanked by generals, many Zimbabweans thought he would announce his resignation. According to people familiar with the matter, he had just told those very generals that’s what he would do.

For 20 minutes the president rarely looked up as he haltingly read a meandering and verbose speech.

The military’s intervention “did not amount to a threat of our well-cherished constitutional order”, Mugabe said. “Nor was it a challenge to my authority as head of state and government. Not even, as commander in chief of the Zimbabwe Defence Forces. To the man, the command element remained respectful and comported.”

The closest Mugabe came to recognising weakness was to apologise for a “few mistakes” he’d made, after dropping some pages and losing his place. Chiwenga had to lean over to point him to the right spot.

'Zim 2', a general with political aspirations

Mugabe’s defiance was forcing his challengers to either go through with the military coup or press on through political channels. Senior Zanu-PF officials started poring over the constitution. It was perhaps unsurprising that a man with seven university degrees would make them work for their prize.

But the genie was out the bottle, and Zanu-PF started impeachment proceedings on Monday. On Tuesday afternoon, Mugabe caved in.

At 5:56 p.m., the speaker of Parliament, Jacob Mudenda, interrupted the hearings to read out a letter he’d just received from Mugabe. As soon he uttered the words that Mugabe would depart, the lawmakers roared and cheered in jubilation. Unbridled celebrations burst out into the streets.