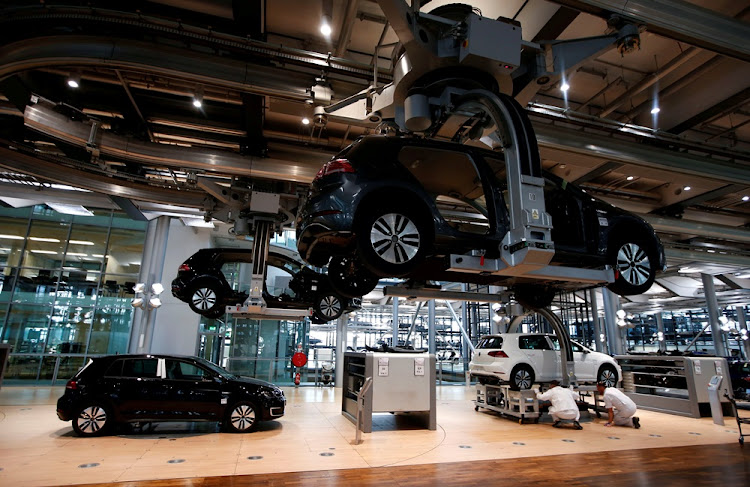 Glencore has increased production of the metals used to make electric car batteries faster than its major mining rivals, according to an industry-wide analysis that shows the scale of a strategy that has big prospective risks and rewards.

The Anglo-Swiss company's output of cobalt and copper roughly doubled in the five years to 2016, while its production of nickel quadrupled, the research compiled for Reuters by S&P Global Market Intelligence shows.

The analysis, based on companies' reports, supports Glencore's assertion it is well positioned to capitalise on an anticipated surge in demand for electric cars in the coming decade.

However the drive also holds potential perils; most of the production has been added through acquisitions, and Glencore has racked up more debt than its competitors, according to S&P Global Market Intelligence.

London hails electric cabs for a fare to a 'different world'

London's black cab has gone electric - and it's just hit the roads.
News
4 years ago

Concerns about the size of Glencore's debts at a time of falling commodity prices led to its share price crashing to an all-time low in 2015, its management pumping in more money themselves and implementing a debt-reduction plan.

The stock has since rebounded, driven by rising commodity prices and Glencore's efforts to strengthen its balance sheet.

Glencore declined to give fresh comment for this story, saying it would issue an investors' update next week. CEO Ivan Glasenberg has said many times this year the roll-out of electric vehicles will boost demand for copper, cobalt and nickel.

The company calculates its debt differently from the rest of the industry, offsetting some of it with inventories of commodities that can easily be converted into cash. At the end of June it said its debt was $13.9 billion.

Glencore's reliance on Democratic Republic of Congo for cobalt as well as copper presents another risk. The other majors avoid the country, which is plagued by pockets of lawlessness and conflict, political tumult, child labour and an opaque legal system.

Analysts and investors acknowledge the risk, but many see it as worth taking.

"The world needs cobalt and DRC needs foreign inflows," said Ryan Seaborne, portfolio manager at South Africa's 36ONE Asset Management, which holds shares in the miner. "We are still bullish Glencore as a company and like the DRC cobalt assets."

Glencore's willingness to operate in Congo has made it the leading global producer of cobalt among the major miners. It increased its cobalt output from 12,880 tonnes in 2011 to 28,300 last year, accounting for more than a quarter of the roughly 100,000 tonne global market, according to the analysis.

Although not widely regarded as an electric vehicle commodity, some research has found zinc, predominantly used to galvanise steel, could be used in batteries if other minerals become too rare or expensive.

A rapid pace of technological development means the mix of metals needed for car batteries could radically change, according to analysts, which could undermine the company's ambitions. But this is a longer-term threat due to the long lead time carmakers need to incorporate innovations, they say.

BHP, for example, says a mass move to electric cars is more than a decade away. It expects demand for oil from light vehicles to peak in 2030, with other forms of oil demand likely to be more sustained.

Anglo American, the world's top platinum supplier, is looking to squeeze more profit out of its world-class reserves by betting on vehicles powered by hydrogen fuel cells in which platinum acts as a catalyst.

While Glencore's competitors have lower outputs of cobalt, nickel and zinc, they are all interested in copper - which has many uses as one of the best electricity conductors - even while they remain more cautious about the rate at which electric vehicles will arrive.

Among major listed players, BHP garners the highest proportion of its profits from electric vehicle metals after Glencore - about a fifth - and this is mostly from copper.

Rio Tinto, the world's biggest iron ore producer, is working on a massive underground expansion at the Oyu Tolgoi copper mine in Mongolia. It also has a lithium project in Serbia but that will not produce before the next decade.

Lithium is a battery metal that makes many investors nervous. Predicting future price levels is difficult as it is abundant and many new projects are under way. For Glencore, keen to have some control over pricing, that is not tempting.

Since its 2015 nadir, Glencore's share price has rallied more than 400 percent. The stock is up more than 20 percent this year, more than the other three biggest publicly listed diversified miners, although off peaks hit in October.

Ratings agencies however cite the company's attachment to polluting coal as a downside risk in the long term. Glencore is the world's biggest shipper of export-quality coal.

Some investors have begun taking profits.

David Livermore, founder and managing director of asset manager Livermore Partners, told Reuters he had reduced his holding on the grounds it looks difficult, though not impossible, for the stock to maintain its momentum.

"I don't see a whole lot of upside in the equity here. It's come a long way," he said.

Livermore has reduced its equity stake to $1 million, from a $2.6 million investment in September 2015 when the shares fell below 70 pence, making gains of $3.1 million.

Seaborne of South Africa's 36ONE Asset Management, which holds 3 million shares in Glencore, has also cut exposure: "We had some redemptions out of our fund, so it's been pure portfolio realignment, and also the stock has run quite hard." But Glencore remains its largest mining holding.

They're in a better position than the rest of the miners," Seaborne added. "If you take a five to 10-year view, you probably want to be in Glencore more than you want to be in any of the other diversifieds."