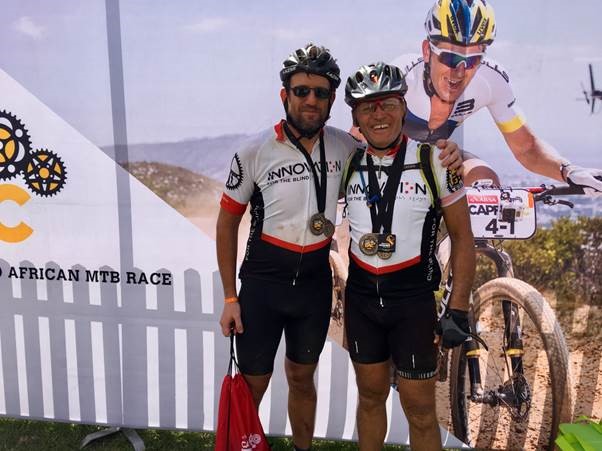 When Albie Heigers got into the saddle on the first day of the 2018 Absa Cape Epic he was‚ by his own account‚ less than 50% prepared.

But his mission to raise funds for the blind drove him and his race partner Marius Strydom over almost 700km in one of the toughest mountain-bike races in the world.

Riding as Team for the Blind the pair completed the Epic with more than R38‚000 of donations in their pockets.

Heigers‚ the Centurion-based CEO of the Institute for the Blind‚ is a seasoned cyclist who has taken on the Epic three times previously. But this time‚ he had never been so undertrained – confirmation of sponsorship from Absa came through just two weeks before the start.

The challenges of the race were daunting – hard falls‚ terrible thirst and endless climbs. “You ride further‚ climb higher‚ dig deeper than you ever thought possible‚” Heigers said.

The seven-day race last month took Heigers and Strydom‚ who owns Gearonline.co.za in Worcester‚ on a spectacular route through the mountains of the Western Cape that included roughly 15‚000m of climbing.

“When you’re 100% sure that the organisers could not possibly make you do another climb on a specific day‚ there is one more‚ then another‚ and another. And somehow you get through it‚” said Heigers.

His working life found resonance in the race: “The blind face epic challenges on a daily basis.”

The most powerful moment of his came on the first day with Cape Town glowing behind him in the dawn. “I thought to myself‚ the people I’m doing this for will never be able to see this view.”

Heigers said support along the way was crucial. “It was especially great when a rider who withdrew due to medical reasons after stage one decided to selflessly give everything‚ with some friends‚ to encourage the rest of us‚” he said.

“He had to give up thousands of rand and months of hard work. Instead of just going home‚ him‚ his friends‚ and family happily stayed to cheer on the rest of us.”

- Jacqueline Flynn is on a SIT Study Abroad programme with Round Earth Media.

The Absa Cape Epic took another‚ not entirely unexpected‚ turn on Monday as Manuel Fumic and Henrique Avancini won a bunch sprint to win the first ...
Sport
3 years ago

WATCH | This blind man will teach you what vision means

Hein Wagner is living proof that we set our own limits. Born blind, Wagner has sought to discover the world through his singular perspective.
Features
3 years ago