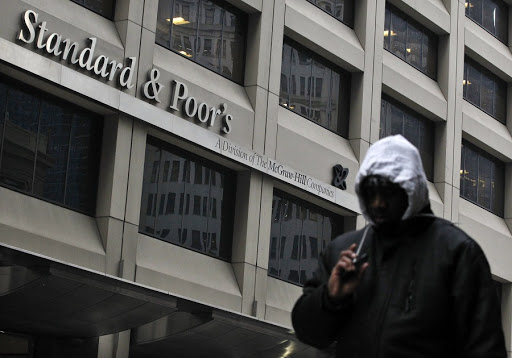 S&P Global Ratings maintained its outlook on SA as stable‚ alleviating the fear the rating agency would give SA a further downgrade at its next ratings review.

"Since Cyril Ramaphosa's election as ANC leader in December 2017 and appointment as the country's president in February 2018‚ business and investor confidence have strengthened‚" S&P said in its latest sovereign rating report on SA‚ issued at 10pm on Friday night.

"We anticipate a pick-up in private-sector fixed investment‚ while lower inflation could boost households' disposable income‚ resulting in higher household consumption. We now estimate economic growth to average at least 2% over 2018–21‚ which is still below 1% per capita. We estimate that among the 20 major emerging markets‚ only Qatar will show slower per capita growth in 2018. We estimate SA's GDP per capita at $7‚200 in 2018‚" its report said.

In its report‚ S&P raised its concerns about the ANC's policy regarding expropriation of land.

"At its December 2017 conference‚ the ANC adopted a resolution to explore options of land redistribution to correct historical imbalances. A motion has since been adopted by Parliament and a committee set up to gather public opinion on the process and establish if it can be done within the current Constitution‚ or [whether it] requires an amendment to allow compulsory acquisition of land without compensation.

"It is still too early to tell how the process will unfold‚ but we expect that rule of law‚ property rights and enforcement of contracts will remain in place and not significantly hamper investment in SA. Our view reflects our consideration of the checks and balances embedded within SA's institutional framework‚ which includes a constitutionally independent judiciary."