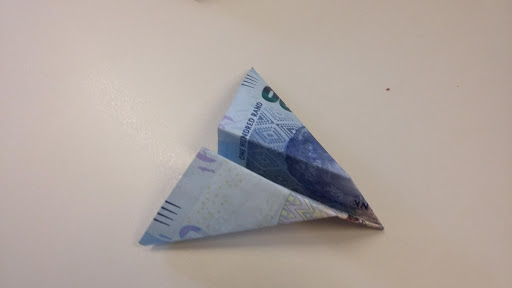 The closest thing the rand is getting to flying right now.
Image: Bruce Gorton

The rand’s comeback against the dollar this month will run out of steam as US rates rise and the trade war between the world’s two biggest economies weighs on global growth‚ according to the most accurate forecaster of the South African currency.

The rand has gained 2.2% against the greenback since the beginning of July‚ to about R13.39 to the dollar on Tuesday. Any further advance should be seen as a dollar-buying opportunity‚ according to Rabobank‚ which tops Bloomberg’s latest ranking for rand-dollar forecasters. It predicts the South African currency will end this quarter at R14.20‚ a slide of about 6%.

"The rand is under renewed selling pressure amid fading positive market sentiment‚" said Rabobank’s London-based emerging-markets currency strategist‚ Piotr Matys‚ whose forecast for the currency is more bearish than the median of R13.46 in a Bloomberg survey. "The prospect of a full-scale trade war remains the main risk factor for the rand and its peers."

The JSE closed weaker on Tuesday‚ but held above 58‚000 points for the second day‚ as Naspers led the market lower after a stand-out performance on ...
Business
3 years ago

The rand slumped 14% in the second quarter amid a sell-off of emerging-market assets‚ with foreigners deserting the country’s bond market at a record pace.

That is making it more difficult for President Cyril Ramaphosa‚ who replaced the scandal-tainted Jacob Zuma in February‚ to deliver on promises of attracting investment and stimulating growth.

While central banks from Argentina to Turkey have tightened policy to support their currencies‚ the Reserve Bank stayed put after cutting its benchmark in March to 6.5%. That narrowed the differential over the US policy rate to the lowest in 11 years‚ reducing the relative attractiveness of South African assets.

Bond and equity outflows could accelerate as the Federal Reserve continues to raise rates‚ Matys said.

Tit-for-tat tariffs between the US and China have already hit the rand and other South African assets. The nation’s reliance on exports of raw materials makes it particularly vulnerable to any slowdown in global growth due to a trade war.

The Bloomberg commodity index has plunged 11% in the past month as prices of metals including copper‚ gold and platinum fell.

"The vicious cycle may still accelerate in the second half of the year‚ which would have serious negative consequences for emerging markets‚" Matys said.

For the rand‚ much will depend on Ramaphosa’s ability to implement his reform agenda‚ Matys said. Among his immediate challenges are keeping populist elements within his party at bay and investors happy‚ while crafting agreements on land reform and ownership of mines.

The South African government is seeking to be part of oil exploration and exploitation in Ghana to mitigate the skyrocketing fuel prices in the ...
News
3 years ago

He also has to consolidate public debt and root out mismanagement at state-owned companies including Eskom.

"At least SA has credible policy makers‚ led by Ramaphosa‚ who are fully committed to implement structural reforms‚ which cannot be said about Turkey‚" he said.