US yield curve to invert in 2019, recession to follow 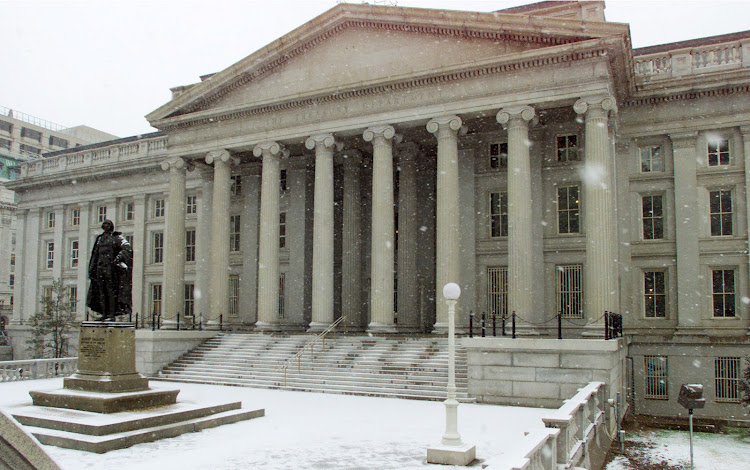 The US Treasury yield curve will invert next year, possibly within the next six months, much earlier than forecast just three months ago, with a recession to follow as soon as a year after that, a Reuters poll showed on Thursday.

Those expectations come on the heels of a deep sell-off in global stocks and the flattening of the US yield curve, with the gap between longer-dated and shorter-dated yields narrowing to its smallest in more than a decade.

Some maturities on the curve, notably yields on 2- to 5-year notes have already flipped. An inversion between 2- and 10-year yields is a closely watched signal as that has preceded almost all the American recessions of the past half century.

The US economy, currently in its second-longest expansion on record, has been juiced late in the cycle by the Trump administration's tax cuts, and is expected to slow sharply by the end of next year as that stimulus fades.

That is expected to leave a budget gap of over $1 trillion that will need to be funded by the issuance of more Treasuries, which currently consists mostly of shorter-term maturities. Combined with policy tightening, that would push yields on those bonds higher and speed up the inversion date.

"We are going to experience or will get closer to yield inversion by the middle of next year or maybe even a little bit earlier," said Elwin de Groot, head of macro strategy at Rabobank.

"We already see growth slowing down next year and further in 2020. We are not yet forecasting a recession in the United States, but the risks have clearly increased and that is going to be reflected in the shape of the yield curve."

The Federal Reserve has raised interest rates three times this year and a total of eight times since the start of its tightening cycle, bringing its overnight benchmark lending rate to a range of 2.00 percent to 2.25 percent. Fed funds futures are pricing in one more rate rise next year after a widely-expected hike at the central bank's policy meeting next week.

But Treasury yields have not kept up with the pace, and are not expected to do so either. Fed policymakers' forecasts have three rate rises due next year, though some central bank officials have thrown those into doubt in recent weeks.

The two-year Treasury yield is forecast to rise to 3.20 percent in the next 12 months, from around 2.78 percent on Wednesday, according to the Reuters poll of more than 70 bond market strategists taken Dec. 6-12. The 10-year bond yield was expected to rise to 3.30 percent from about 2.90 in a year.

While that would put the yield spread between the two-year and 10-year Treasuries in a year around where it is now, at around 10 basis points, about 40 percent of respondents forecast that gap to be zero or negative in the next 12 months.

Just in the last three months, the yield spread has collapsed by two-thirds from just over 30 basis points. That has coincided with one of the most tumultuous periods on global equity markets since late August.

Thirty of more than 40 strategists who answered an extra question expect the 2s-10s yield spread to become negative in the next 12 months, including 15 who said within the next 6 months. The other 10 strategists said it would take two years or more.

Half of 26 strategists in the poll expect a U.S. recession to follow that inversion within the next two years. The other half said it would take three years or more.

While there is no set pattern on how long it takes for a recession to hit once the yield curve has flipped, it took about 18 months before the last deep recession about a decade ago.

However, not everyone says there is a direct link between inversion and an imminent recession.

The Fed holds about $4 trillion in Treasuries and mortgage-backed securities on its balance sheet, the majority of them in longer-dated maturities. Some claim this has artificially depressed yields at the long end of the curve.

But St. Louis Fed President James Bullard said on Friday the expected path of interest rate hikes would mean there is a real risk the yield curve inverts, which he had warned earlier was a recession risk.

Bullard first publicly raised a red flag over the yield curve a year ago. At that time the gap between the two-year and 10-year was 58 basis points.

"An eventual inversion would not signal imminent doom with regards to the economic outlook or financial markets. The lag between ten-year yield falling below the two-year yield and the U.S. economy falling into recession has previously been between six and 24 months," noted Ben May, director of global macro research at Oxford Economics.

Progress in the US-China trade talks injects a sense of optimism into global markets, but a no-confidence vote in UK Prime Minister Theresa May looms
Business
2 years ago

The rand was softer against major global currencies on Monday afternoon, with global risk assets, in general, coming under pressure.
Business
2 years ago

Ranjeni Munusamy was in Brussels this week, hoping the power seat of the EU might yield some answers to questions plaguing the (possible) great ...
Opinion & Analysis
2 years ago