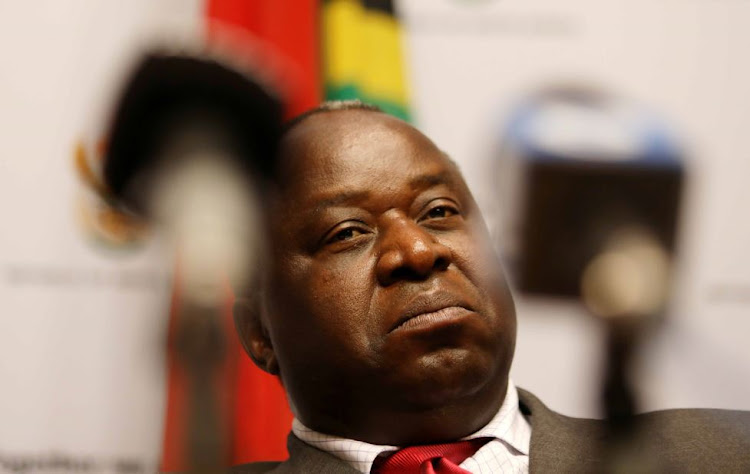 It will be finance minister Tito Mboweni's first national budget. It may also be his last, assuming he was serious when he told a roomful of economists last month he wouldn't be coming back after the election.

But if he had hoped to leave a positive legacy, he may have discovered in his short tenure that the state of SA's public finances is too dire for any such ambition, with an at least even chance that the budget this week could be the one to trigger the long-feared downgrade by rating agency Moody's.

Mboweni had hardly put his feet under the finance ministry desk when he had to present an October medium-term budget policy statement (MTBPS) that showed growth was expected to be weaker, tax collections would fall well short of February's forecasts, the deficit had deteriorated sharply and the public debt ratio would worsen more than previously expected and would take longer to stabilise.

LISTEN: What to expect from this year's National Budget:

But if the MTBPS was little more than a holding operation, markets had expected that tough decisions might be taken, especially on the spending side, to ensure that the main budget this month would look a lot better. But that's not going to happen and if anything, the deficits and debt ratios that Mboweni will report on Wednesday could be worse, with tax collections deteriorating sharply since October.

Corporate tax collections actually fell in December, while personal income tax collections came in well short of budget expectations. VAT collections outperformed, but this was not enough to counter the underperformance in the other two big taxes.

For the first nine months of the fiscal year, revenue growth was 7.6% instead of the revised 8.3% projected in October and PwC tax policy leader Kyle Mandy predicts that revenue will come in R10bn short even of October's revised number. Treasury had already factored in a R27bn revenue undershoot for the current year, mainly to reverse the mess former South African Revenue Service commissioner Tom Moyane made of the VAT refund system.

Next year's revenue will also fall short and, in the absence of any action on the spending side, the fiscal deficit - the gap between government revenue and expenditure - could again widen.

What could counter the worse-than-expected revenue to some extent is that government spending is also running behind budget for the year to date - up 5% instead of the budgeted 7.7%. But there could well be a last-minute, pre-election splurge in spending while revenues could even get worse.

PwC sees the consolidated budget deficit widening to 4.3% for this year and 4.7% next year, compared with the Treasury's 4% and 4.3% October forecasts. Other economists see the deficit coming in unchanged or only slightly worse despite the large revenue shortfall.

It can't have helped that Mboweni has by all accounts been a fairly absent and disengaged minister - insiders say he hasn't spent much time in the Treasury offices - nor that the necessary tough spending cuts, in the ballooning public sector wage bill in particular, were never likely in an election year.

But the mega issue this week, the one that could derail all the fiscal numbers (and derail even SA's modest economic growth), is Eskom's crisis - financial and operational - which puts question marks over growth forecasts and more immediately raises the question of how Mboweni will deal with Eskom's request to take R100bn of its debt onto the state's already strained balance sheet.

President Cyril Ramaphosa made a vague promise of government support for Eskom in his state of the nation speech, promising this would be done "without burdening the fiscus with unmanageable debt" and that Mboweni would provide details. Moody's this week signalled that it would downgrade SA's rating if the government provided any such support without immediate and "unpopular" measures to cut Eskom's costs and/or increase tariffs.

What the budget will do about it is the big question.

Some economists expect Mboweni will announce some support now: others that he could promise conditional support over the next three to four years if Eskom delivers the restructuring and cost cuts that have been promised.

Will Mboweni be there to see it? Though markets loved his appointment, Ramaphosa is walking a tightrope and the finance minister's maverick views have arguably been a liability. The question is whether the president can identify a replacement in the short term who is palatable to both the ANC and to the markets.

Several names are floating about, some of which are probably just wishful thinking. Reserve Bank governor and former Treasury director-general Lesetja Kganyago was the first choice last time but he has resolutely refused the post. The names of two other former Treasury DGs - outgoing Absa CEO Maria Ramos and Standard Bank SA CEO Lungisa Fuzile - have also been mentioned and though markets would no doubt love them, it's not clear either is a real candidate.

Two former deputy finance ministers - Jabu Moleketi and Mcebisi Jonas - have also been mentioned, but Jonas reportedly also turned down the post the last time and though Moleketi is well regarded, it is not clear he is on the list.

An interesting name that has surfaced lately is that of another former government DG, AngloGold Ashanti chair and Business Unity SA president Sipho Pityana, who played a key political role in the campaign against state capture. Then there's Goldman Sachs's Colin Coleman and Business Leadership SA's Bonang Mohale, both of whom are said to be interested in cabinet posts.

We will see which, if any of them, presents the next, no doubt equally difficult budget; it's not a job anyone should relish.