Is resolute Lesetja Kganyago about to make a rate cut? 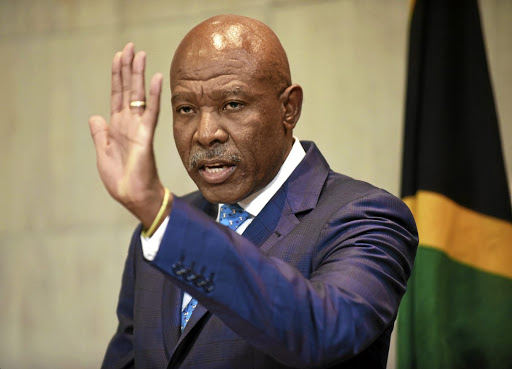 Reserve Bank governor Lesetja Kganyago briefs the media after a Monetary Policy Committee meeting in January. As the committee meets for the second time this year, some commentators have raised the spectre of a surprise interest rate cut this week. Picture: Gallo Images/Business Day/Freddy Mavunda

The last time the Reserve Bank really surprised the market was a month before the tragic events of Marikana in 2012, with the then governor, Gill Marcus, deciding to cut rates by 50 basis points against all expectations.

On the evidence of a slowing economy and despite inflation being in the upper end of the central bank's targeted range, she sought to reduce lending costs in following what's termed "flexible" inflation targeting.

Inflation averaged 5.6% that year, and when Marcus stunned interest rate observers it was sitting at 4.9% in July from 5.5% the previous month.

The central bank's targeted inflation range is between 3% and 6%.

With growth now in a rather precarious position in light of recent weeks' loadshedding, and inflation at its most recent reading sitting at 4.1% - below the mid-point of the range - some commentators have raised the spectre of another surprise cut this week by the Reserve Bank's Monetary Policy Committee as it meets for the second time this year.

Fears have been raised that the weak economy may be treading ever closer to recessionary territory.

But some say the dogged approach by Marcus's successor, Lesetja Kganyago, to containing inflation leaves little room for flexibility in inflation targeting. His focus is mindful of SA's economic performance and employment, as is the case with the US Federal Reserve.

"Weaker-than-expected inflation figures and the country's struggling economic growth are factors that would be supportive of a rate cut," said Tumisho Grater, economic strategist at Novare. 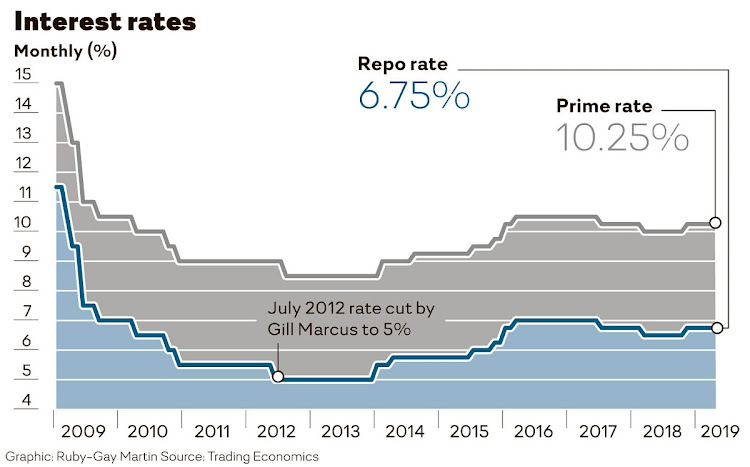 Much like in the US, consumption makes up about 60% of the South African economy. The struggles of retailers and banks over the past few years are symptomatic of consumers' struggles in a low-growth environment.

However, Grater said that it would be "more" appropriate to hold rates given electricity tariff hikes, volatile international oil prices, a currency that is susceptible to global and local forces, investor sentiment changes and uncertainty over global growth and trade policy.

Kganyago is likely to keep rates unchanged due to the supply risks highlighted by Grater and other economists.

The Bank's conservative nature has its detractors, namely the ANC's alliance partner Cosatu and the SACP.

Duma Gqubule, economist and founding director at the Centre for Economic Development and Transformation, said that Kganyago's hawkish tones have crimped growth.

SA's interest rates have been raised by 100 basis points since his 2014 appointment. In contrast, Marcus followed the world's other leading central banks in cutting rates by 125 basis points during her one-term tenure to respond to a global economic slowdown.

Marcus reduced lending rates to their lowest in 30 years.

At the time she reportedly acknowledged that the decision would not overcome the challenges facing the economy but it would assist to alleviate pressures faced by certain sectors of the economy, such as the Eurozone crisis and a deteriorating outlook for emerging markets.

Gqubule said with inflation around 4%, and the prime lending rate at 10.25%, "it is punitive and usurious to have a 6.25% real interest rate in the face of near recessionary conditions. We're heading to a second recession now."

FNB forecasts inflation will average 4.8% for the year.

"Inflation has got zero to do with demand-side conditions and you cannot use interest rates to kill cost-push inflation. That's the end of the story," said Gqubule.

Over the past few years the focus of monetary policy in the country has been about tightening in line with the US Federal Reserve, but that urgency has dissipated.

The world's biggest central bank has prepared the market for fewer rate increases in the US because of no inflationary pressures, with some economists expecting no increase at all this year.

Cruickshanks said there was little chance of a rate hike because of low growth and the elections in May.

"There's no reason to see a sudden spike in inflation unless a political development spikes the rand. That is not in short-term sight right now," he said.

FNB expects a potential interest rate hike in 2020 when monetary policy globally is expected to move towards tightening, a move that could spike investment outflows from emerging market economies as the dollar strengthens.

In a lower-growth environment, greater input costs and borrowing may hinder growth and employment prospects.

Business confidence continued its downward trend in the first quarter of 2019, falling to lows last seen in the second quarter of 2017, the RMB/BER Business Confidence Index showed earlier this month.