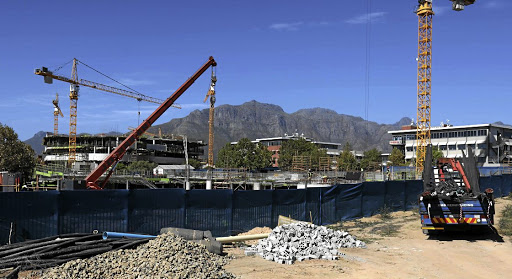 The Capitec head office construction site outside Stellenbosch is a physical symbol of the bank's powerful growth. Picture: Esa Alexander

Mountains, vineyards, farmstalls - the scenery of the Cape winelands has a much closer association with postcards than debit cards. But on a hill near Stellenbosch a handful of construction cranes are working on a new head office for Capitec, the bank that has become a part of the landscape.

With 11.4-million active banking clients, after expanding by an average of 128,000 clients a month for the past year, the R800m building is a sign of the growth Capitec has managed to generate in a stalling economy.

The bank opened 14 new branches in the financial year to end-February, to bring the total to 840, and plans 25 more this year.

Larger rival Standard Bank this month announced the closure of 91 of its 629 branches, most of them by the end of June, as fewer clients use bricks-and-mortar outlets for banking. Nedbank and First National Bank are also moving towards smaller branches. Absa is embarking on an overhaul of its retail and business banking unit after years of being constrained by its British former parent Barclays.

Capitec still has 6.6-million clients who use branches - an 11% increase on a year ago.

"We are not going to say no to 6.6-million clients," said Fourie, but added that digital clients were also growing at a steady clip, up 18% over the same period.

Opening new branches is Capitec taking the battle to its established banking rivals, attracting customers who prefer face-to-face interaction and who largely use feature phones, as opposed to apps on smartphones.

The likes of Standard Bank cutting the floor space of those of its outlets that remain is a sign that it is moving closer to Capitec's model for serving clients, said Fourie.

The Stellenbosch-based bank typically has smaller branches than its four Johannesburg-based rivals. And over the past two years it has opened 23 mini-outlets of only about 100m² each.

In a community still reeling from the Steinhoff scandal, the bank is now the largest show in town, sitting on a market capitalisation of R155bn, making the Eikestad's other listed companies such as Distell, Remgro and the much-humbled Steinhoff look ever smaller in the rear-view mirror.

Rapid overseas expansion, one of Steinhoff's pitfalls, has never appealed to Capitec. It bought a Baltic fintech company a few years ago and is learning enough from that experience not to get too excited about greener pastures. 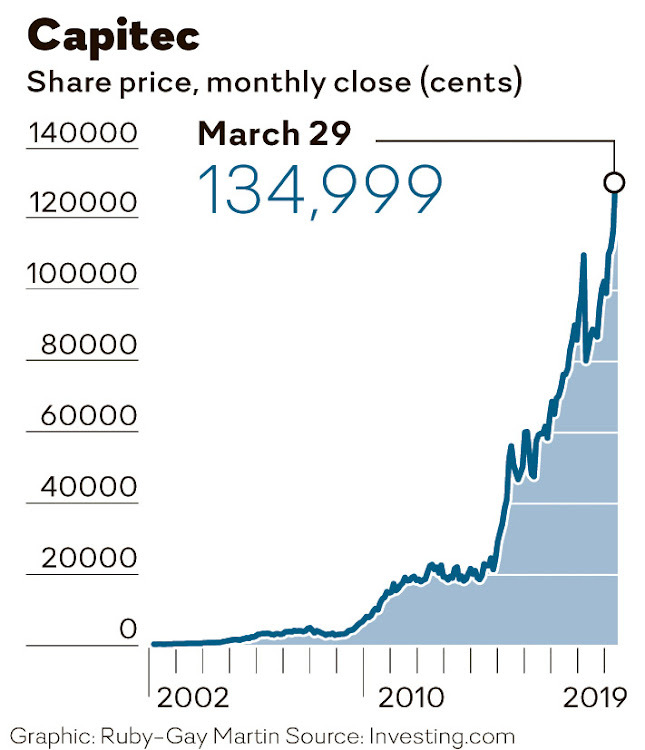 "South African companies don't have a good track record overseas," Fourie said, adding that there is enough to do in SA.

Apart from more retail clients, Capitec is also eyeing a share of business banking. Its takeover of Mercantile Bank is yet to be approved by competition authorities, but the decision should come in the next two months, Fourie said.

"Mercantile Bank only has about a 1% share of the business banking market. If we can grow that to 5% in the next few years, that would be an achievement already."

Started in the small banks crisis of the early 2000s, Capitec grew to be one of the country's two largest unsecured lenders within a decade.

By 2014, its biggest rival in that market, African Bank, had to be bailed out after its holding company made a disastrous investment in furniture retail.

Capitec has expanded rapidly since, mopping up some of African Bank's good clients. Though it makes most of its money from unsecured loans, it has steadily improved the contribution of transaction fees to its net
income.

Perched on a hill, only an ambitious golf shot from its old premises, Capitec's head office-to-be reveals more than one thing about the bank.

First, it is maturing as a business. Having over the years sprawled across 12 rented buildings in Techno Park - a start-up hub on the road between Stellenbosch and Somerset West - it is now consolidating its management into its own single, open-plan building.

But also, it will remain true to its thrifty roots. A price tag of R800m is modest as far as head offices go. Compare that to the R2bn Standard Bank forked out for its Rosebank office block or the R280m rent Discovery is reportedly paying annually in Sandton.