News not all bad for food prices 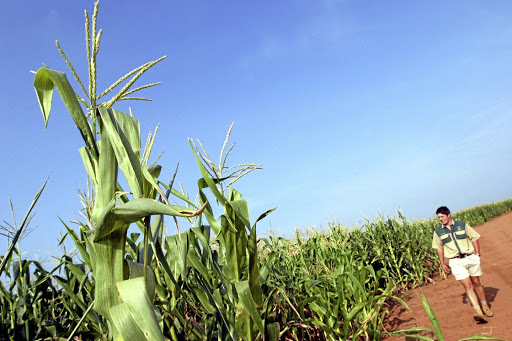 A farm worker ploughs a field for a maize crop in Mpumalanga four years ago. At the time, farmers were battling to cope with the worst drought since 1992, brought about by the El Ni�o weather phenomenon, and maize prices soared. The food price inflation outlook is better this year. Picture: Bloomberg via Getty Images/Waldo Swiegers

Rising fuel and electricity prices and a weaker rand could feed into higher food inflation, but economists expect the uptick to be relatively moderate.

Pioneer Foods CEO Tertius Carstens says: "We anticipate more inflation to be evident in the near term - driven by exchange rate movement and the knock-on effect on fuel and most raw material input costs. The main risk for near-term inflation remains the exchange rate."

Speaking on the sidelines of the pre-harvest briefing hosted by FNB this week, Jannie de Villiers, CEO of Grain SA, says he does not see prices increasing above current levels but some winter frost could result in a reduced crop, which could result in SA importing a bit more, which would lead to small price hikes.

"Grain-mill products, your maize meal, your bread, those things might increase a little bit going into the year ahead."

He also says there may be an increase in the price of maize meal.

Wandile Sihlobo, chief economist of the Agricultural Business Chamber of SA, agrees that inflation is unlikely to rise significantly, saying: "Food-price inflation could average at about 5% this year."

He says that despite prices for both yellow and white maize having risen more than 40% over the past year, the net effect will only become serious if the price reaches the critical point of R4,000 a ton.

Overall food inflation is mitigated by decreases in the price of some items; meat prices, for example, have experienced downward pressure over the past year.

"After a slump early in the year due to the outbreak of foot-and-mouth disease, it is expected that the sector will recover modestly in the second half of 2019," said Paul Makube, senior agricultural economist at FNB.

The department of agriculture, forestry & fisheries says it has negotiated revised veterinary certificates so beef exports can resume to markets such as Bahrain, Qatar, Egypt, the UAE, Kuwait, Jordan, Lesotho, Swaziland and Mozambique.

The South African Reserve Bank's monetary policy committee this week decided to keep the repo rate steady at 6.75%. In his address, Bank governor Lesetja Kganyago said: "Food-price inflation is expected to bottom out in the first quarter of 2019 and to peak at 5.9% in the second quarter of 2020." 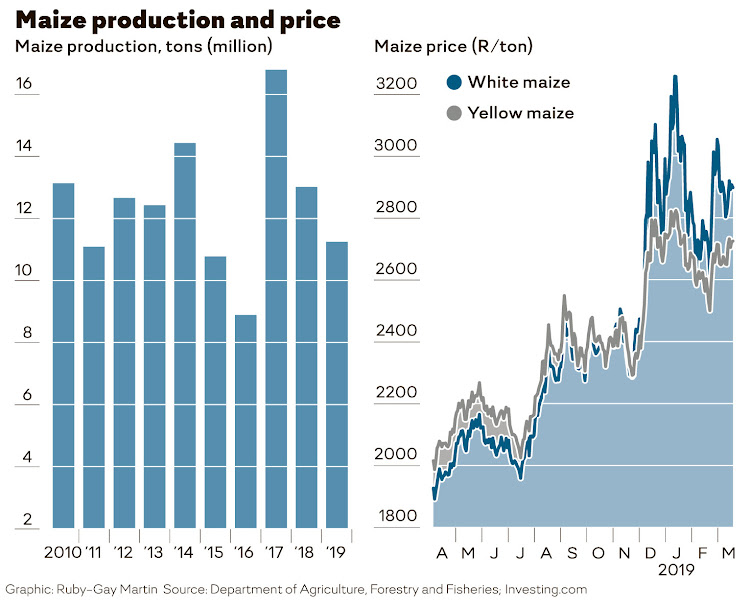 In calculating total inflation, the food basket has a weighting of about 16%; within the food category grain, grain-based products and items influenced by grain prices, such as dairy and meat, account for 75% of the calculation.

The contribution of agriculture, forestry and fishing to SA's GDP was 2.6% in 2017, says Makube.

"However, the contribution is even higher if the forward and backward linkages to the rest of the economy, particularly manufacturing, are taken into account," he says.

Kganyago says higher energy and fuel prices will also have an effect on inflation in the medium term.

The load-shedding of recent weeks has forced farmers to use expensive diesel to run generators, a cost they are likely to pass on to consumers if the Eskom crisis persists in the long term.

He says the main challenge they face is drought, which means poor harvests, reduced incomes and hence problems in repaying bank loans.

Climate change is of great concern to farmers, Sihlobo says, but affects everyone because of the tight connections between global commodity markets. Severe weather in one country or region can affect the supply-and-demand equation, and with it prices, across the whole world.

Some farmers are still recovering from drought-induced losses, says Makube.

Higher interest rates amid a weak economy would worsen the situation for those still grappling with drought, especially in parts of the Northern Cape, the Eastern Cape, the Western Cape and the North West.

Sihlobo highlights rand volatility as a risk for food inflation because SA imports the bulk of its fertiliser.

Local farmers import more than 90% of their chemical inputs. A weaker rand could lead to a significant rise in input costs for the sector, which would most likely be pushed through the supply chain, with ordinary South Africans ultimately bearing the brunt.

For the rest of 2019, Makube also identifies early frost as a risk for maize planted late in the season.

The season for winter crops such as wheat starts shortly and good rains are needed if yields are to match last year's. Makube says agricultural growth will remain constrained in the first half of 2019 and edge up in the second half. "We, however, expect a modest rebound in agriculture GDP in 2020 on strong output, weather permitting."