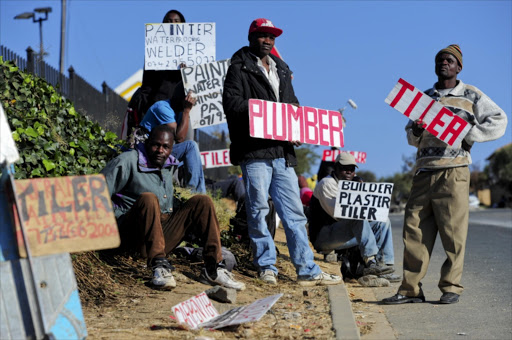 Stats SA says 2.2-million jobs were lost in the second quarter of 2020 during the lockdown.

But despite this, overall unemployment fell from 30.1% in the first quarter to 23.3% in the second quarter.

Stats SA released its latest quarterly labour force survey on Tuesday. The survey indicated that the number of employed people decreased by 2.2-million to 14.1-million in the second quarter of 2020 — during the lockdown — when compared to the first quarter of 2020.

“This unprecedented change is the largest Q1 to Q2 decline since the survey began in 2008. Contrary to what one would expect in the face of such a large decline in employment, the number of unemployed people declined substantially as well.

“The number of discouraged work seekers, like the number of unemployed, decreased by 447,000. The majority of those who moved out of these three categories moved into the category of not economically active for reasons other than discouragement, which increased by 5.6-million between the two quarters,” said the report.

Euromonitor says global recovery could take five to 10 years, putting many of SA’s 1,5 million jobs in the sector at risk
Opinion & Analysis
1 year ago

The official unemployment rate is calculated using the number of people who are employed and unemployed, and does not include discouraged work seekers, according to the report.

“The unemployment rate according to the expanded definition increased in all provinces except in the Free State, where it decreased by 3.3 percentage points. The largest increase was recorded in the Northern Cape [up by 5.1 percentage points], followed by the Eastern Cape [up by 3.9 percentage points]. When asked why they did not look for work, most people cited the national lockdown/Covid-19 as the main reason for not actively looking for work.

“This phenomenon of a greater increase in inactivity than in unemployment is not unique to SA,” reads the report.

According to the report, of the 14.2-million people who were employed in the second quarter, more than half were expected to work during the national lockdown by the companies they work for.

Comair to shed 400 jobs as it adopts business rescue plan

Comair announced on Friday it is cutting about 400 jobs as the airline tries to turn its fortunes around.
News
1 year ago

SA's main challenge is to get millions of unemployed youth into jobs, the Centre for Development and Enterprise executive director said on Wednesday.
News
1 year ago