Race not an issue in CEO’s departure, Absa insists 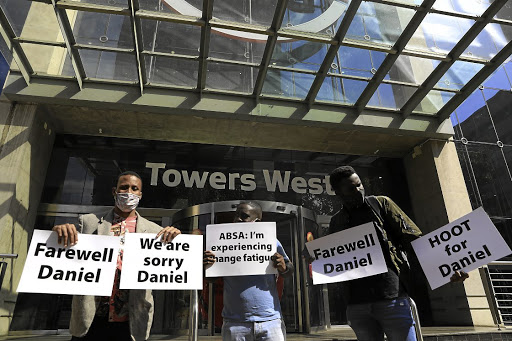 Supporters of Daniel Mminele express their feelings over his surprise departure from Absa. The bank has rejected suggestions that race was a factor. Picture: ALON SKUY

Absa chair Wendy Lucas-Bull has defended the banking group against perceptions that its first black CEO, Daniel Mminele, was forced out as a result of clashes with white executives.

She reiterated on Sunday that his departure was a result of differences about the group’s future strategy, and was not due to any lack of commitment to transformation.

Absa, SA’s third-largest banking group, shocked the market on Tuesday when it announced it had reached an agreement with Mminele that he would step down on April 30, because “the parties have not managed to achieve alignment in relation to the group’s strategy and culture transformation journey”.

The parting of ways with Mminele, a former Reserve Bank deputy governor who joined Absa in January last year, was on a “no fault” basis, the group said.

Observers close to the bank have spoken of an “incumbent cabal” that pushed back against changes Mminele wanted to make, and had the ear of the board.

If I were a young black professional and Absa came to me for a job, why would I go there?

Polo Radebe, CEO of the Association for Black Securities and Investment Professionals

But Lucas-Bull said: “Before we finalised Daniel’s appointment, he had the opportunity to understand our existing strategy and supported it. The board, led by myself and lead independent non-executive director Sipho Pityana, which is diverse in background, gender, race and tenure on the board, unanimously reached this conclusion. The board acted in the best interests of Absa.”

She said the board was “doing some self-reflection right now in terms of the lessons learnt”.

Absa put a new strategy in place in 2018, after the exit of its former UK parent Barclays.

Lucas-Bull emphasised that the disagreements were not over the “what” of the strategy but “the when and the how, which includes the operating model”.

She said one issue on which Mminele and the board did not see eye to eye related to the group’s operating model. “As part of the 2018 strategy, we’ve moved away from an operating model that was highly centralised, to one which gave what we call end-to-end accountability to each business unit. The centralisation we had seen under Barclays did not work and created inefficiency and friction.”

Polo Radebe, CEO of the Association for Black Securities and Investment Professionals, said this week: “My concern is, are we seeing gains in racial and gender transformation reversed in our industry? We had been happy to see progress in the financial sector in terms of the appointment of black people that matter, but now we are seeing a reversal.

“If I were a young black professional and Absa came to me for a job, why would I go there?”

Radebe said the key question was where the pipeline of black executives who could be promoted from within the group was, but Lucas-Bull said Absa had “strong black talent”. The strength of the internal pipeline was demonstrated by the banking group’s appointment last week of Punki Modise as interim group financial director to replace Jason Quinn, who has been appointed as Absa’s interim CEO.

Absa operates in 11 other African countries and Lucas-Bull said in each of those the leadership and staff were nationals, most of whom were black.

“The board is committed to diversity and transformation,” she said. “I would also accept that we have further to go in our culture journey.”

Having at one stage been a potential candidate for Reserve Bank governor, Mminele’s departure from Absa potentially puts him back in the running for critical roles in public service.

At the smaller banks, however, Kennedy Bungane has just been appointed to head African Bank, replacing Basani Maluleke, who also left suddenly after a bust-up with the board, while Hannah Sadiki replaced Japie van Niekerk as MD of Bidvest Bank in November, and Tauriq Keraan heads newcomer Tyme Bank.