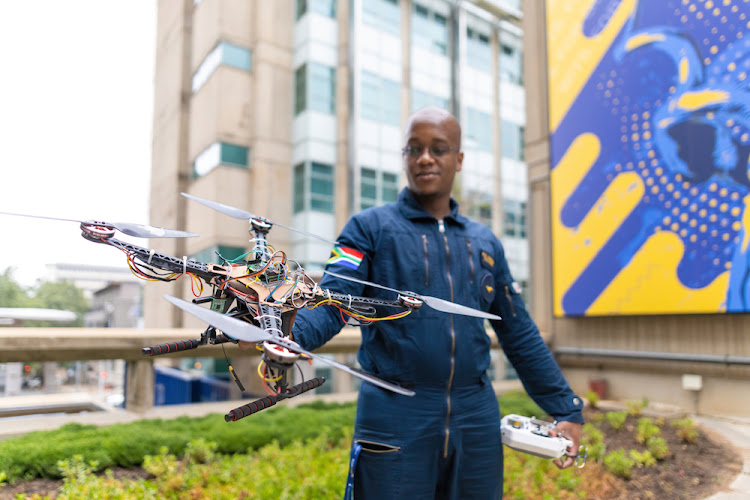 Drones can be used to search for missing people or to reduce the costs of using airplanes for certain logistics requirements, says Xolani Radebe.
Image: Supplied/Wits University

Designing something that could fly was a step closer to his aviation career, says Xolani Radebe, 21 who was not always a big dreamer. Growing up in a community where most young people are unemployed and were never afforded opportunities to study further, he never imagined pursuing a career as an aircraft engineer.

From runaway to the run way of aviation dreams

Says Radebe: “It’s difficult to have a dream when people around you are not working or even studying further. There is no source of inspiration and this can be discouraging. You look at them and see yourself and wonder if you will turn out like them.”

Fortunately, a high schoolteacher ignited a flame of hope after Radebe nearly gave up on himself. He says Mr Ngwenya, his teacher from Letare Secondary School in Soweto, helped unearth his potential during a conversation about purpose. It changed Radebe’s negative outlook.

“My high schoolteachers gave me a sense of purpose and gave meaning to my life. I had lost focus until Mr Ngwenya called me to order in grade 11. Then I realised that I needed to change my ways and focus.” Empowered with a vision and purpose, the drone designer began making an effort to achieve academic success. His interest in aviation was piqued after he found out about the field at a career expo.

“I developed an interest in aviation when I attended the Africa Aerospace and Defence (AAD) show. I had the opportunity to meet the chief of staff of the SA Air Force at this show and at the 100 defence countdown.”

After receiving advice from a lecturer at Wits University on whether to pursue mechanical or aeronautical engineering, he opted for the latter. In 2019, Radebe and his business partner Tino Kurimwi founded an aviation company, Rita Sibanyoni Aviation.

Radebe and Kurimwi believe in advancing societal good and find solving problems using their engineering and business skills gratifying. Their motive in designing drones has always been to provide solutions that could help some of SA’s social challenges. For example, when Covid-19 hit, the drone aviators knew that they wanted to be part of the solution.

They developed a drone that, with a built-in thermal camera, can detect the body temperature of large groups of people in vast areas such as malls or other busy places. “High fever is said to be one of the symptoms of the virus. This drone is able to detect if anyone in a large gathering has an above-average temperature and can alert the drone operator,” says Radebe.

While drone laws exist, the prototype was developed with an eye on the future and to secure fresh viewpoints and options for solving complex problems. The pandemic screening solution could save time for those who are screening large groups of people in busy areas. Instead of screening everyone, the drone could be flown to read the temperature of the people in that area.

Drones, he says, are solution-based and are able to serve multiple purposes. They can be used to search for missing people or for crime detection purposes and to reduce the costs of using aeroplanes for certain logistics requirements.

“Uplifting people in my community is important to me. I want to give others the same opportunities I’ve been afforded in life. I would not be pursuing engineering had it not been for the exposure from the youth development programme,” says Radebe, who works out of the Transnet Matlafatso Centre at Wits University, where he is mentored and nurtured.

Radebe, who refers to himself as “Gogo’s boy”, says she raised him from the age of 11 after his mother passed away, and he has always wanted to make her proud. His cofounded company Rita Sibanyoni Aviation takes her name and he hopes it will be the biggest drone company in Africa in future.

For more information about the Future at Wits visit the website.

This article was paid for by Wits University.