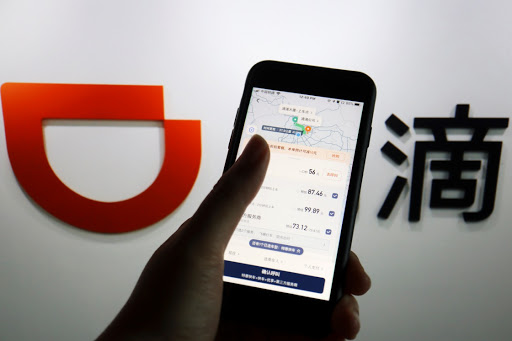 The app of Chinese ride-hailing giant Didi on a cellphone. Picture: REUTERS/FLORENCE LO

China’s ride-hailing giant DiDi Chuxing may have had its share price run off the road by the Communist Party there, but that hasn’t stopped it making deep inroads into global markets.

Listed on the New York Stock Exchange in July at a market cap of more than $70bn (R1.02-trillion) — compared to rival Uber’s $80bn — its value has almost halved since then, due to a regulatory clampdown in its home market.

That has less to do with its ability to attract new customers than with the Chinese government suddenly remembering it doesn't like capitalism. To be fair, however, investors have also bailed out of Chinese stocks because of last week’s passing of the Personal Information Protection Law, which sets new rules for how companies protect users’ data. Such regulatory actions tend to spook investors, even if they are good for consumers.

Talking of which, DiDi’s arrival in SA is being, well, hailed by both passengers and drivers. Since its launch in Johannesburg earlier this month, we’ve tried their service on various occasions, while also using the incumbents, Uber and Bolt. A fascinating picture has emerged of a company that treats its service providers as its key asset.

One driver after another has highlighted the DiDi terms and treatment as a major factor in choosing either to add the service to their bouquet of options, or going fully over to the newcomer. This affirms the claim made by DiDi after its March launch in Gqeberha and its arrival in Cape Town in June that its “drivers receive a better deal in terms of earnings, safety and experience”.

It helps, of course, that DiDi may have less rigorous standards for recruitment of drivers. Getting onto Uber has become increasingly difficult for prospective drivers, due to the company limiting numbers to avoid oversupply and its consequence of fewer passengers per driver. It also puts drivers through a more extensive vetting process, while DiDi appears to require only a professional driving permit, and a check of the car for roadworthiness.

This means the bar for car quality can be lower on DiDi, and partly explains why the service at present offers only lower-cost options, under the Express and Go brands, equivalent to UberX and Uber Go or Bolt's regular and Go services.

Uber is differentiated by its premium services, Comfort, Black and Van, which can double the cost of a ride. Bolt offers an upmarket option called, simply, Premium.

Uber and Bolt also offer regular discounts to more active customers, which can make rides more cost-effective than on DiDi, but this is invisible to drivers, who benefit from the full amount.

Carina Smith-Allin, DiDi’s head of public relations and communications for Sub-Saharan Africa, insists that the company does not cut corners in recruitment.

“We have a robust and sometimes lengthy onboarding process in place that requires a set of documents,” she says, "[but] as we continue to strengthen our commitment to economic empowerment, we are certainly pushing driver sign-ups.”

The biggest attraction of DiDi, for drivers, is earning potential: DiDi charges drivers a commission of 13% on each ride, compared to about 20%-25% for Bolt and Uber drivers. That has positioned DiDi as a massive new creator of jobs. During its Johannesburg launch, the company said 20,000 drivers had applied to join. This means it will quickly rival Uber’s 13,000 drivers and Bolt’s 25,000-plus workforce.

Passengers, too, are being offered a greater sense of comfort, thanks to 14 safety features on its app. “Both drivers and riders will benefit from our best-in-class ride-hailing safety system, with a 24/7 emergency centre and hotline, plus features such as the ability to share your live journey with trusted contacts,” says Smith-Allin.

All ride-hailing providers claim these kinds of safety features but DiDi offers arguably the most significant safety differentiator: automatic audio recordings made during trips, to serve as evidence should there be complaints from drivers or passengers about behaviour in a car.

That spells trouble for troublemakers, but also for the competition.

• Goldstuck is founder of World Wide Worx and editor-in-chief of Gadget.co.za