Rand slides past 17 to the dollar, weakest level since 2020 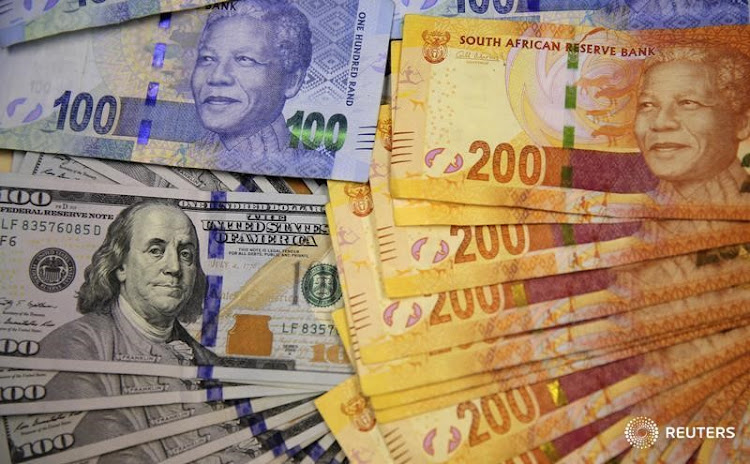 The rand declined as much as 0.8% on Monday to 17.0017 per dollar, the weakest level since September 2020. File photo.
Image: REUTERS/SIPHIWE SIBEKO

The rand weakened past 17 per dollar on Monday as the currency’s resilience is tested by fears of a US recession even as local fundamentals remain supportive.

History shows the rand tends to decline sharply when the world’s economic engine is in recession. Skipping the broad Covid-related slump in global markets in 2020, the US recessions of 2008/9 and 2001 knocked as much as 13% off the rand’s value. Based on Bloomberg scenario-planning tools, similar conditions this time round could see the rand weaken by about 12%.

In the first half of the year, the rand benefited from high commodity prices that lifted the current account into surplus. Improving fiscal metrics and a hawkish tilt at the central bank also helped. The market remains heavily long rand, according to US Commodity Futures Trading Commission data, leaving the currency at high risk of a sell-off as conditions change.

“Even more concerned by recession fears could be the crowded positions in popular non-oil commodity names like SA,” Bank of America Corp strategists led by David Hauner wrote in a note to clients. “They won’t escape tightening financial conditions, recession fears and de-risking, even if the long-term fundamental picture is likely to remain supportive.” 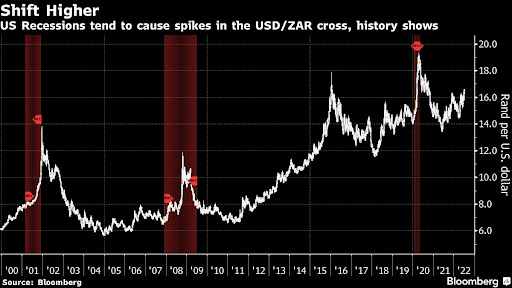 The rand weakened past 17 per dollar on Monday as the currency’s resilience is tested by fears of a US recession even as local fundamentals remain supportive.
Image: Bloomberg

While money managers including JPMorgan Chase & Co and Deutsche Bank AG say emerging markets are well positioned to weather an economic slowdown, high-yielding currencies tend to buckle as capital flows head for havens like the dollar. SA could be particularly hard hit as demand for the country’s raw material exports declines, curbing a vital source of foreign exchange. Not coincidentally, the rand’s drop in recent weeks has tracked a slump in prices of industrial metals.

While a global recession could weigh on oil prices, which would benefit energy importers like SA from a balance of payments point of view, that’s only half the story, according to Nedbank Group Ltd.

“The relationship between oil and the rand takes the shape of a smile, with a ‘sweet spot’, or inflection point, where the level of oil or the underlying economic conditions represented by oil are optimal for the currency,” Nedbank analysts including Reezwana Sumad said in a note to clients.

Green energy: the lie sold to SA by Germany and the UK

The champions of clean energy have turned to dirty coal to manage a crisis brought on by their sanctions against Russia.
Opinion & Analysis
1 month ago

While domestic positives for SA thus far outweighed the negatives, that is changing. Deepening power outages that will weigh on economic growth have already caught rand bulls off guard.

Not all the bulls have given up. The sell-off could abate if China’s economy recovers strongly and the SA Reserve Bank follows through on its promises of aggressive policy tightening, according to Societe Generale SA.

“We see the recent sell-off in ZAR as overdone, driven by accumulated negative news on the domestic and external fronts,” said Marek Drimal, the London-based lead CEEMEA strategist at SocGen. The lender sees the rand at 15 per dollar by year-end.

“In our view, the rand is likely to recover in the second half of 2022 on the accelerated tightening by the Reserve Bank and the expected recovery in China.”

Markets are pricing in almost 200 basis points of rate increases by the end of the year, which implies at least one 75-basis-point hike at the three remaining policy meetings of the year. But as the Hungarian forint has shown, outsize rate moves don’t necessarily help the currency. The forint dropped as much as 1.6% after Hungary’s central bank lifted its policy rate by the most since 2008 last week.

“Although the rand has depreciated a lot in the past two months, its weakness can extend much further, especially if the US goes into recession,” the Nedbank analysts wrote.

“Cyclically, we favour rand weakness well above 17” per dollar, they said.

"They are forcing the government to revoke licenses while they prepare their own “tavern rollout” to control alcohol sales and business," claimed ...
TshisaLIVE
1 month ago

SA’s load-shedding crisis has been around since 2008, why has it taken until now to declare an energy emergency?
Opinion & Analysis
1 month ago

Calm in Sri Lanka as president, premier to quit over economic collapse

Calm returned to the streets of Sri Lanka's commercial capital Colombo on Sunday and protesters were jubilant as President Gotabaya Rajapaksa agreed ...
News
1 month ago

South Africa’s reliance on coal to generate most of its power makes it an environmental pariah but it’s also helping keep inflation in check, ...
News
1 month ago