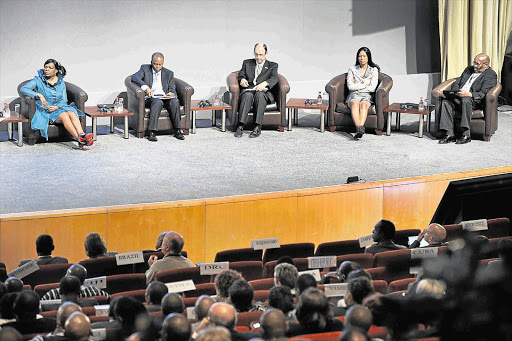 Dina Pule in her red-soled shoes at the Indaba Picture: ELMOND JIYANE

Minister Dina Pule's eagerness to show off a pair of expensive Christian Louboutin shoes, with their distinctive red soles, has confirmed her link to the ICT Indaba's missing millions.

When Pule, the Minister of Communications, walked onto the stage to open the ICT Indaba in Cape Town in June, she was wearing a pair of the French designer shoes - now understood to have been bought with some of the R25.7-million that sponsors pumped into the event.

The shoes were bought in Barcelona, Spain, by her romantic partner, Phosane Mngqibisa, during one of their international trips together. Mngqibisa's company, Khemano, had been hired by event organiser Carol Bouwer Productions to help stage the ICT Indaba.

The Sunday Times reported in June that MTN, Vodacom and Telkom - who were lobbied by Pule to pay the R25.7-million towards the event - were furious that millions in sponsorship fees were drawn from the account of the event organiser by Mngqibisa.

The sponsors are now demanding to know how their money was used, and MTN has hired the Werksmans legal firm to probe whether the R15-million it paid was looted.

The Sunday Times can show where some of that missing money went.

Bank statements confirm that Mngqibisa took R100000 from the bank account of Carol Bouwer Productions before flying to Barcelona, Spain to attend the GSMA Mobile World congress from February 25 to 29. While there, he lobbied people to attend the ICT Indaba to be held in Cape Town from June 4 to 7.

This week Mngqibisa said that he used the "marketing allocation budget" to attend the Barcelona conference so that he could "market the inaugural ICT Indaba".

But he denied travelling to Barcelona with Pule, adding that "I do not recall even seeing her at the GSMA conference". However, three sources independently confirmed that, in fact, Mngqibisa accompanied Pule as her official travel companion on the Barcelona trip.

Mngqibisa, who has repeatedly refused to clarify the nature of his relationship with Pule, denied buying her the Christian Louboutin shoes.

"I purchased men's shoes for myself. I have the receipt to prove this," he said. He did not reply to the Sunday Times when asked for a copy of this receipt.

Mngqibisa's explanation is contradicted by Carol Bouwer's spokesman, Victor Dlamini, who confirmed on Friday that the shoes were bought with sponsorship money. Several other sources confirmed this.

They said Mngqibisa had given Bouwer several invoices, one of them showing that he bought Pule the Christian Louboutin shoes from a designer shop at Placa de Catalunya in the Barcelona city centre.

Bouwer, a former TV actress contracted by Pule's Department of Communications to manage the ICT Indaba, told the Sunday Times this week that she had demanded answers from Mngqibisa about the R100000 spent in Barcelona.

Said Dlamini: "We are not sure about why the shoes were bought."

Pule refused to answer questions from the Sunday Times this week about the shoes. "I have nothing to say. Thank you," she said before hanging up.

A Sunday Times investigation has established that Bouwer was strong-armed by Pule's department into hiring Mngqibisa's company, Khemano, as a subcontractor for the Indaba.

This took place at a meeting at Montecasino's Palazzo hotel in Sandton in November, shortly after Pule was appointed minister. Bouwer signed the deal with Mngqibisa in January.

Bouwer told the Sunday Times that she would not have hired Khemano had she known of Mngqibisa's relationship with Pule.

Pule also leant on the three companies over which she has oversight - MTN, Telkom and Vodacom - to "sponsor" the ICT Indaba to the tune of R25.7-million. Pule's own department chipped in another R10-million.

Alarmingly, Bouwer was told to give Mngqibisa access to her bank account, where Telkom and Vodacom's sponsorship money was deposited - cash he withdrew within days.

This week, Mngqibisa admitted withdrawing the cash from Bouwer's account but said: "I transferred money to pay suppliers."

Detailed financials have not been provided to prove this, and the sponsors are demanding explanations from Bouwer about how their money was spent.

MTN's R15-million was mysteriously transferred to the account of a company called ABR Consulting, rather than that of Carol Bouwer.

"It seems we were conned," said one MTN executive.

MTN was told that Carol Bouwer's account was not tax-compliant, which is why the money had to go to ABR Consulting. This was not true. Werksmans has struggled to find out how this R15-million was spent.

"Criminal and civil charges will be laid against anyone found to have misused or abused MTN funds meant for the ICT Indaba," he said.

Vodacom executive head of division for ethics and compliance Avinash Dhanasir, stated in an e-mail that Bouwer's company must explain how much was paid to Khemano. Specifically, Vodacom wanted "answers" about who received R4.3-million billed to the organisers simply for "events management", and another R6.1-million for "event planning and delegate sourcing".

Mngqibisa said the accounts "do not take into account the payments made to suppliers after 30 June". He said the management fees were "paid out by Khemano for costs for the event, and none of it ended up with Khemano".

Telkom seems less concerned about what happened to the R10-million it contributed to the ICT Indaba. Despite earlier vowing to launch a forensic probe, Telkom refused to answer questions from the Sunday Times this week about what it had found.