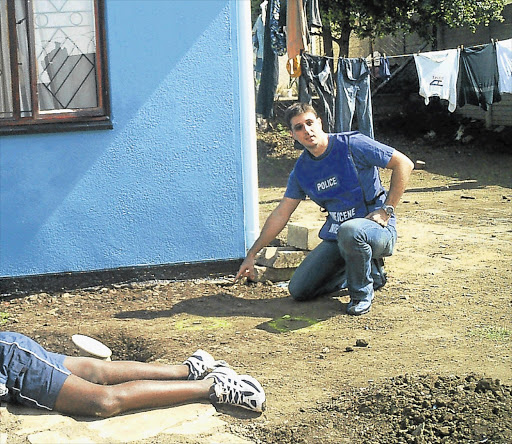 A police reservist formerly embedded in the notorious Cato Manor organised crime unit has become the first insider to publicly break ranks on the alleged "hit squad", spilling the beans - in a series of exclusive interviews with the Sunday Times - on the trail of torture and murder he says he witnessed.

Ari Danikas, a Greek national who has since fled back to his homeland in fear for his life, has detailed numerous atrocities, including how Cato Manor members "executed" a crime suspect days after KwaZulu-Natal Hawks boss Major-General Johan Booysen allegedly told him to "put a bullet in his head".

Booysen, who along with 29 members of the unit is facing charges of murder and racketeering after the Sunday Times exposed how the unit operated as guns-for-hire, has vehemently denied Danikas's claims, saying he is "deranged".

It is understood that Danikas has shared information with investigators.

He said he decided to go public after several recent attempts to contact him in Europe by "suspicious people directly or indirectly involved with the Cato manor case".

"In order to protect myself, I have decided to go public as well as approach the local authorities for help," Danikas said.

His accounts are backed by documentary, video and photographic evidence and, in some instances, by three independent sources close to the unit, one of whom previously served with the unit. They did not want to be named.

block_quotes_start We felt untouchable. We had the power to move as we pleased block_quotes_end

In one video, Booysen and Cato Manor members watch as a wounded burglar bleeds to death in a garage before an ambulance arrives. Danikas identifies police member Captain Adele Sonnekus saying what appears to be "Hy kriewel al hoe nader - trap op sy maag" (he is crawling nearer - stomp on his stomach).

On Friday, Sonnekus said that although she remembered Danikas, she had "no comment" on the allegations and could not remember the incident. She did not reply to e-mailed questions.

Booysen confirmed that he and Sonnekus were present, but insisted that "what Ari is saying about allowing someone to die is rubbish. On my arrival there I was told the ambulance was already on its way."

He said Danikas's version was false: the shooting occurred at 9.15pm and the paramedics arrived 38 minutes later.

He said Danikas left South Africa "after he had defrauded various individuals and after being suspended as a police reservist".

"If he had witnessed any of the things he said he did, he'd definitely be one of the state's witnesses - and I know for a fact he is not," Booysen said.

Other sources sympathetic to Booysen painted Danikas as a "psychopath" who sent e-mails with racist overtones.

Asked about this, Danikas admitted that it was "possible" he had made some derogatory remarks, but insisted that it should not undermine the main issue - that he had witnessed atrocities committed by the Cato Manor unit.

Danikas worked closely with the unit for a decade before fleeing in 2008 when he received death threats because he had "witnessed too much", he said.

Family albums seen by the Sunday Times attest to Danikas's closeness to Booysen, his unit and his family during that time.

Danikas said Booysen was either complicit or had direct knowledge of some atrocities committed during what he described as the unit's decade-long reign of terror, which included extortion, torture and extrajudicial killing.

"We felt untouchable. We had the power to move as we pleased, with police equipment such as sirens and flashing lights installed in our luxury private cars with the authority of Booysen," he said. "That, in my opinion, is a recipe for disaster."

The unit's "standard policy" was to wait for a suspect to arrive at a scene, then shoot to kill. "They did not want any prisoners, because the system was corrupted and they would be out on bail," he explained.

He described the unit as "trigger-happy people that have no respect for human life. They torture, use excessive, brutal force and alter evidence on a crime scene. This I witnessed myself first-hand."

He said Booysen was also present initially at the Cato Manor offices in November 2007 when three other members allegedly tortured Greek national Costas Svourakis for two hours after stripping him naked.

Svourakis was found with watches stolen by the notorious so-called Rolex gang. After the interrogation, Svourakis was cleaned up and officially booked, Danikas said.

But this week Booysen rubbished Danikas's accounts as "fraught with so many improbabilities, it's actually a joke. Do you think I would be so stupid that I would tell a person outside the unit to put a bullet in someone's head?"

He also insisted Svourakis "wasn't even touched" by his men.

"I've got nothing to hide. I can honestly tell you Ari is deranged. I challenge him to make an affidavit and come to South Africa and testify."

Danikas said it came as no surprise that Booysen would attack his character. "This is his tactic to discredit any person who goes against him. But any allegations based on rumour don't concern the facts of the case."

He said 10 years of "records, dedications and awards [as a police reservist] are testimony enough to my character".

"When and if I am asked by the proper authorities to testify, I will gladly do so, as long as it doesn't compromise my safety."