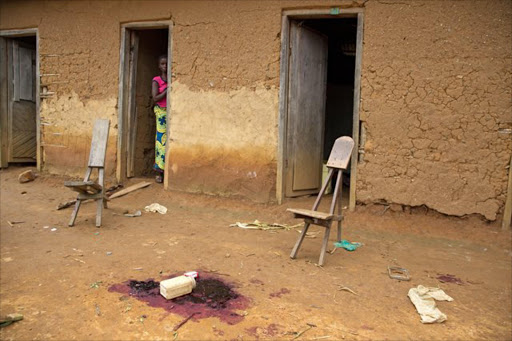 Bands of killers are spreading a reign of terror in the town of Beni and surrounding villages in the eastern DRC. Stephan Hofstatter and James Oatway met some of the survivors of a series of massacres

Plantain farmer Joseph Mastaki was walking back from his fields when he ran into the killers.

Some wore Democratic Republic of Congo army uniforms, others were in civilian dress. They ordered him and eight other villagers into the bush at gunpoint.

"I found 20 people there with their hands tied behind their backs," said Mastaki. "When I saw those people, and looked at the faces of those soldiers, I knew I had to run."

With eight other villagers, Mastaki made a break for it. The soldiers captured four boys but the rest escaped into the bush. They lay there for four hours. When the sun began to set, Mastaki and a companion ventured out but were spotted. His companion was shot in the side.

"We ran back into the bush. I saw torches moving around. I didn't move a muscle all night," he said.

The next morning he walked to Vemba village, about 10km north of the city of Beni in the eastern DRC. He stopped outside the chief's house.

"I saw so many dead bodies I lost count," he said.

"They were scattered everywhere. The chief, his wife, women, children. Their skulls split open with axes and machetes."

He went on to the nearby village of Mavivi. Along the way he saw bodies in groups of five or 10 lying on the path. Some were stripped naked. "I couldn't even weep it was so shocking."

Based on interviews with relatives of victims, local human rights groups estimate that at least 100 people were killed during the Vemba massacre on November 20.

Security sources claim the military has buried dozens of villagers in mass graves to cover up the extent of the bloodshed. The government claims only 58 people were killed, but it is not letting any media, independent observers or even relatives into the area to verify the facts.

Vemba marked the climax of a series of 16 mass killings in and around Beni that started on October 3 in the town of Oicha.

In that attack, up to nine people were hacked to death. Then, on October 16, the killers struck Ngadi village, 10km from Beni and a few minutes' drive from a UN base.

They arrived wearing wigs and women's clothing. The first person they shot was Lieutenant Matadi, a soldier who lived just off the main road with his wife.

She said later she had heard the attackers speak Kinyarwanda, fuelling rumours that they were former members of the defeated M23 rebels.

The group advanced on a dirt road into the bush, killing at random.

"All we heard was gunshots on the road," said local headman Musekuse Kolu, who hid in his house with his family. "They moved along and everyone they could see they killed."

One woman was saved by her metal front door, now pockmarked with bullet holes.

Two women next door were sitting down to dinner with their three boys when the attackers burst in and killed them with machetes. Only a woman cowering in a bedroom with her infant was spared.

Now this slaughterhouse has been turned into a drinking hole frequented by soldiers.

"They put a bar here so people can entertain themselves and forget what happened," said one patron.

By the time the lights of an army pick-up shone down the dirt road, causing the attackers to flee in the direction of the village at Kadou 5km away, they had slaughtered 13 people. In Kadou the killing continued.

Timothy Mohindo's wife was among the 16 victims there. "They used a machete on her neck," he said.

The pattern was repeated over and over.

Bands of killers, some wearing army uniforms, others tracksuits, most carrying machetes and axes but some armed with AK47s, roaming the villages around Beni, slaughtering people at will, then returning to their bases in a strip of jungle 5km away.

Sometimes they would launch raids for goats and food in preparation for larger attacks, kidnapping porters to carry their loot and executing them afterwards.

Kasereke Mukono, 35, is married with six children. He lives in Linzu village 5km from Eringeti. The killers arrived at 8pm.

Two escaped. The others, including Mukono, were made to drop their booty in a clearing and taken to an execution ground 2km away.

"They made us lie down on the ground," he said. "They had tied our hands behind our backs. They put their boots on our feet and stabbed us in the neck with bayonets. Blood was coming out of my mouth."

Mukono and two other men were left for dead. At 4am a military pick-up rescued them and took them to hospital.

The day after Ngadi was hit, the killers struck again, at Abiolosi village near the town of Eringeti, 60km north of Beni.

An eerie silence descends as you enter the village, a huddle of huts separated by a stream from a wall of impenetrable jungle. Here they dragged villagers out of their homes and took them to a small grove surrounded by coffee bushes and mango, paw-paw and plantain trees.

They tied the villagers' hands behind their backs and slaughtered them like animals.

"When I came here, all I could see was carnage," said local government official Alexi Makwima.

"They were piled up. Children of six months, two years, dashed to the ground. People hacked to death with axes and machetes. I felt as though the dead had come to live among us."

Two weeks later they struck Beni itself. Desire Kasereke, 25, lives in the Boikene district close to the main road on the edge of the city.

He was on his way to a cigarette kiosk when the killers struck. He hid in the bushes until they moved on, killing people at random.

One woman was shot through the doorway of her kitchen while preparing dinner. Another was shot under her bed where she was hiding with her eight-year-old son.

When Kasereke crept out of hiding, a scene of bloodshed awaited him.

"My brother, Mbali, was lying here," he said, pointing to his stoep. "He was shot in the stomach, crying." He was loaded into an army pick-up together with the bodies of two dead victims.

The attacks left Beni gripped with fear. The streets fall silent at night; a curfew has been imposed. Anyone caught out of doors is beaten and made to pay a fine. Those without money are thrown in jail.

Enemies real or imagined are everywhere.

A man who arrived at the local bus station with an axe in his luggage was denounced as a killer and arrested. A week later, a mentally ill man was killed by a mob.

On October 29, Ramazani Bizimana was hauled off a bus, clubbed with concrete bricks and set alight. He ran a short way before the flames went out. The mob caught up with him and bludgeoned him to death, setting him alight again. Witnesses reported that a policeman cut a strip of flesh from his body and ate it. Others followed suit. His only crime was that he spoke Kinyarwanda and was not from Beni.

In the villages, people huddle around fires for safety at night. Some have formed self-defence militias armed with machetes. They, too, sit around fires, gripping their weapons, waiting for the next attack.

A church pastor in Beni summed up the helplessness.

"They keep killing and killing everywhere and we don't know why or who is responsible.

"No one understands it. Everyone is silent. And we are swimming in fear. We don't know where to run."