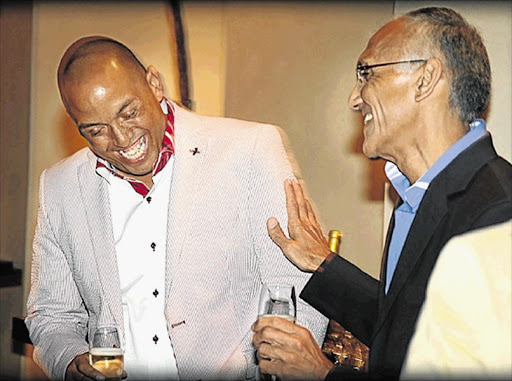 Kenneth Diedricks and lawyer Vas Soni at Diedricks's 40th birthday party at the Saxon in 2012. Soni would be appointed South Africa's anti-corruption boss the next year

A top Transnet official is being probed for allegedly using bribe money to throw lavish parties, one of which was attended by lawyer Vas Soni only a day after it was announced he would become South Africa's anti-corruption boss.

Other guests at the parties included the rail company's service providers and politicians such as former cabinet minister and military commander Siphiwe Nyanda.

Kenneth Diedricks, who was Transnet Freight Rail's head of legal and forensics, quit his post in November while under investigation by audit firm PwC.

He allegedly received at least R2-million in kickbacks and used the money to throw the parties, buy a mansion and go on expensive overseas holidays.

He is also accused of receiving house-warming gifts from companies he gave work to.

These included a Persian carpet worth R19200 from a Turkish businessman with a Transnet contract and dozens of one-litre bottles of Macallan and Glenlivet single malt whisky worth more than R1000 each.

Contacted this week, he said he was unaware of the PwC probe and had quit Transnet for personal reasons.

But Sunday Times reporters have seen evidence that Polyzomba, a company that did rail maintenance for Transnet and was mysteriously awarded a R25-million settlement for a job that company sources claim was not done, paid at least R300 000 towards Diedricks's R3.7-million mansion in Bassonia, south of Johannesburg.

This is where he threw a house-warming party on August 31 2013 attended by Soni, the former head of the Special Investigating Unit, and several other lawyers who have received work worth millions from Transnet through Diedricks.

Party pictures show Soni, who was on Transnet's list of preferred lawyers chosen by a committee Diedericks chaired, lounging at the house's bar the day after President Jacob Zuma announced he would take the helm at the SIU. (He resigned in January this year, citing personal reasons.)

The bar is equipped with four climate-controlled wine fridges. A sign on the counter next to a model of a Transnet locomotive announces that "Life's too short to drink bad wine".

Guests at the palatial double-storey house built on a ridge with sweeping views of Glen Vista golf course included Polyzomba CEO Sifiso Pretorius. Diedricks personally signed off on the R25-million settlement with Polyzomba without consulting his contract lawyers.

Soni and some of the service providers at the house-warming party also attended his 40th birthday party at the Saxon hotel in Sandton on April 14 2012.

Deposit slips reveal Diedricks spent R120 324 to entertain 40 guests, some of whom spent the night. Wines on offer included Kanonkop pinotage at R650 a bottle. The menu included coffee-cured duck breast or baked butternut and ricotta tartlets as cold starters and chimichurri lamb medallions or curried crab for mains.

Suspicion about Diedricks arose when he authorised paying Polyzomba R25-million to settle a contractual dispute with Transnet, but kept the deal from other senior legal staffers. The payment allegedly went through on the afternoon of December 24, when most staffers had already left for the Christmas holidays.

After the party at the Saxon, he took his family to Paris and Dubai, allegedly spending an estimated R200000 cash. In December they went to the Bahamas and allegedly blew another R100000, and in January 2013 to New York, spending R80000.

The documents reveal that on February 14 2013, Polyzomba paid R304000 into the personal savings account of its project manager, Refiloe Martin. On February 18, Martin deposited R300000 of this into the account of Louro & Tiago, the law firm that handled the Bassonia property transfer. The house was bought for R3.7-million and has a bond of R3.36-million with Investec.

Next, Diedricks started buying furniture, worth an estimated R1-million in total, all paid for in cash. Invoices show he dropped R100000 on a 10-seater dining set and bedroom suite, R57000 on outdoor furniture and R59500 on a lounge suite.

Diedricks claimed this week that he was the victim of a smear campaign orchestrated by disgruntled former staffers he had targeted. He described them as "criminals", but declined to provide any details.

He said he was "never investigated by PwC [and] never interviewed by PwC" and had left Transnet because "my life was under threat from the people I investigated". He refused to answer any questions about his alleged bribes.

However, he did not deem this inappropriate and thought it "unfair" to single him out. "There were other lawyers who were there at the house-warming. If I thought I was gaining an advantage I would not have accepted the invitation."

Transnet freight rail spokesman Sandile Simelane said he was not aware of an investigation into Diedericks. "He resigned for personal reasons," he said.