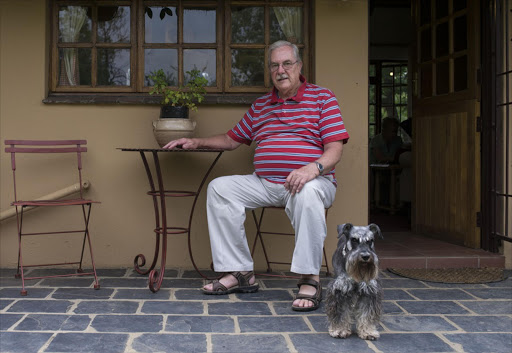 Chris Knauf who lives in Benoni discovered when he retired last year that his pension has gone missing. He's spent eight months being sent from pillar to post but no one can find it. Now he faces a bleak destitute future.
Image: IHSAAN HAFFEJEE

When Chris Knauf retired he received the shock of his life. After 35 years working as a salesman for companies making plastic containers, he expected to see out his twilight years in modest comfort on a plot outside Benoni, east of Johannesburg.

But when the 70-year-old tried to access his pension,  worth an estimated R1-million, in August 2014 he discovered he was penniless.

“I’ve been sent from pillar to post but no one can tell me where my pension is,” he says. “Soon I’ll be high and dry. I won’t have any income at all. Then I’m dead.”

Knauf is one of hundreds of thousands of South Africans who have lost their nest eggs, worth an estimated R9-billion in total, thanks to the alleged bungling, negligence and a top-level cover-up at the Financial Services Board.

This is according to explosive papers filed in the  High Court in Pretoria this week by Rosemary Hunter, who heads the FSB’s pensions department. She has decided to take her CEO, Dube Tshidi, her entire board and Finance Minister Pravin Gordhan to court to compel them to produce the results of two independent investigations being kept under wraps into what happened to these funds.

One probe was conducted by retired Constitutional Court judge Kate O’Regan  and the other by audit firm KPMG.

Many of the workers affected, especially the rural poor or mine workers and their families living in neighbouring countries, have no idea why their pensions vanished or how to get them back.

Others close to retirement are about to get the same nasty shock as Knauf.

Hunter’s court filings paint a picture of how the FSB had allegedly been negligent in overseeing the disposal of assets of thousands of so-called “orphan” or dormant pension funds.

These are stand-alone funds for individual companies that were abandoned by their trustees after they fell under umbrella funds for multiple employers administered by major insurance companies.

The FSB allowed about 4500 of these orphan funds to be cancelled between 2007 and 2013 by  batches of electronic applications.

Hunter initiated an internal probe after she joined the FSB in 2013 and made some startling discoveries.  She found assets worth R3.4-billion “had not been properly accounted for” when the FSB cancelled the registration of the funds.  This excludes assets worth billions that belong to thousands of dormant funds that have not yet been cancelled.

The FSB claimed in a statement this week that “all assets found in the funds were transferred to unclaimed benefit funds where they can still be claimed by their rightful owners”. Most of the cancelled funds were underwritten, “which means the assets belonged to the insurer, because they operated on the basis of an insurance policy”.

But this is disputed by two senior sources at the FSB, who spoke on condition of anonymity. “There are no complete records that this money has been transferred to the unclaimed benefit funds,” says one.  “How do we prove that if they won’t release the results of the investigations that were done? If they’d done that, then at least they could justify saying the money’s there and people can claim it.”

In one case, FSB officials took just three days to investigate 668 funds before cancelling them.

It would have been impossible for the officials “to have conducted the investigations reasonably required to satisfy the registrar that the funds had no assets or liabilities and that their registration could thus be cancelled”, she said.

In another case a single employee of a major retirement fund administrator was allowed to represent 923 funds that were cancelled.

In 2014, Hunter reported the matter to the board, which appointed  Judge  O’Regan to look into it.

O’Regan’s report led to the appointment of the KMPG investigation. Preliminary information quoted in the court papers suggests that in a sample of just 520 cancelled dormant funds, assets worth more than R1-billion are not properly accounted for, which means a total of R9-billion could be unaccounted for.

But the FSB board and Tshidi refuse to release the reports.

Documents show the FSB spent more than R5-million on the KPMG report and then paid R115000 for an external legal opinion, apparently because the body was not happy with the outcome of the KPMG probe.

According to one source with knowledge of its contents, the KMPG report recommends a forensic investigation into possible corruption.

Hunter accuses Tshidi and her predecessor, Jurgen Boyd, of colluding with the fund administrators to shut down the dormant funds unlawfully, then trying to fire her on trumped-up charges when she blew the whistle.

She says that when she alerted Tshidi to her findings she was met with “considerable resistance”, which led her to believe he had “personal interests in ensuring that defects in the conduct of the cancellations project are not exposed”, according to her court papers.

Contacted this week, Boyd declined to comment, saying his position would be reflected when the FSB’s responding papers were filed. FSB spokesman Tembisa Marele said Tshidi would not comment “as the matter is now before the court”.

Marele said in a statement the FSB had taken “all reasonable steps” to investigate Hunter’s allegations, including appointing O’Regan and KPMG, but that the investigations were not complete yet.

None of the parties have filed responding papers.