Former union boss Zwelinzima Vavi has spilled the beans on how President Jacob Zuma orchestrated a secret “business meeting” between his son Duduzane, a Gupta brother and Teodoro Obiang Nguema, the president of Equatorial Guinea. 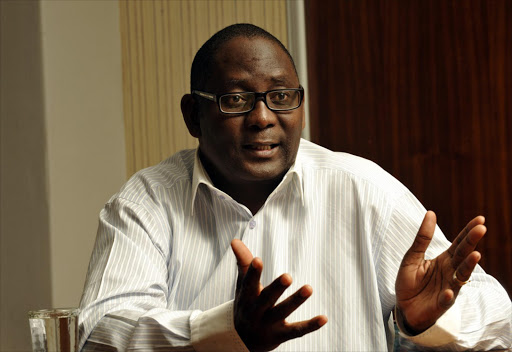 “No one will dig old monkey bones to back up a theory that I was once a baboon.” — Zwelinzima Vavi, tweeting in response to the discovery of Homo naledi, September 12.
Image: ROBERT TSHABALALA

Vavi was part of a delegation, which  included Zuma and SACP leader Blade Nzimande, that was invited by the West African dictator to attend Equatorial Guinea’s Independence Day celebrations on October 12 2008.

The former Cosatu general secretary believes the meeting was held “to discuss private business interests” and regards the incident as the beginning of state capture in South Africa by the Guptas.

Vavi said he would report the incident to public protector Thuli Madonsela.

The trade unionist said he and Nzimande thought the main purpose of the trip was to use the time together to discuss the future of South Africa with Zuma. Zuma, who became ANC leader in 2007, was about to become president and the alliance leaders expected to discuss the composition of the new cabinet and government.

Instead they were kept waiting by Zuma for days and surprised at the arrival of Rajesh Gupta and Duduzane, who were immediately whisked to a secret meeting with Obiang “to discuss business deals”.

In an exclusive interview with the Sunday Times this week, Vavi said he was “absolutely incensed — both me and Blade”.

“The president brings us all the way here only to find ourselves twiddling our fingers for four days without a discussion,” he said. “Yet these guys who arrive on the fourth day are prioritised.”

He was particularly perturbed to learn the pair had just arrived from Angola and the Central African Republic, where they said they had been “doing business”.

“The daughter of [Angolan President Jose Eduardo] Dos Santos is one of the richest women on the continent, not because of her business astuteness [but] because of her proximity to her father.”

Duduzane and Gupta were taken “straight into the place where [Zuma] and the president of Equatorial Guinea were meeting”, he said.

They “locked themselves into this room for hours”. Afterwards the delegation flew back to South Africa.

“That meeting seems to be confirming what everybody is now talking about, the complete capture of the ANC,” said Vavi.

“I think it is a serious conflict of interest, more so when [Social Development Minister) Bathabile Dlamini plays this card about all of us having smallanyana [little] skeletons ...  we don’t want them to come out and if they do, all hell will break loose.

“I think that statement is very telling — she’s blackmailing people into silence.”

Zuma’s spokesman, Bongani Majola, referred queries about the trip to the Department of International Relations and Co-operation.

But Dirco spokesman Nelson Kgwete said he could not comment because Zuma had not been on state business at the time. “There’s nothing we can do.”

Majola did not respond to subsequent messages left over several days.

Nzimande said he remembered the trip well. “I was invited by the president of the ANC, Jacob Zuma, in my capacity as general secretary of the SACP, for Equatorial Guinea’s independence celebrations.”

However, he declined to be drawn on Duduzane’s arrival with Gupta or the meeting with Zuma and Obiang.

“I am not in a position to talk about [the] travels of ...   Duduzane,” said Nzimande, adding that  he had “never seen or witnessed a meeting between president Zuma, Nguema, Duduzane and Gupta”.

Through their company Mabengela Investments, Duduzane and  Gupta are involved in the most significant Gupta deals likely to result in lucrative state contracts.

Mabengela previously stood to benefit from an empowerment deal with ArcelorMittal which fell through after an outcry. It holds  stakes in the  Gupta-owned Shiva Uranium, a mine that would benefit from the state’s nuclear programme, and  Infinity Media, which is vying for a free-to-air TV licence.

In March  Bloomberg reported that shares in the Gupta-controlled coal company Tegeta Exploration were transferred to Mabengela weeks before Tegeta bought Glencore’s Optimum mine, which supplies coal to  Eskom.

This week the SACP called on Zuma to cut ties with the Guptas and for him to institute a judicial commission of inquiry into “corporate capture” of the ANC by the family.

It said it was ready to provide evidence to ANC secretary-general Gwede Mantashe of the Guptas’ alleged influence over ministerial appointments and government business.

Mantashe said this week that the ANC would investigate whether Zuma and his family’s relationship with the Guptas constituted state capture.

The Hawks are also investigating a corruption complaint against Duduzane  and the Guptas filed by the DA.