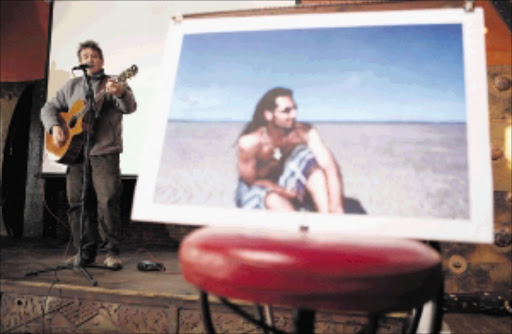 Johnny Clegg performs his song, The Crossing (O Siyeza - We are coming), at a wake at Moyo, Zoo Lake, in Johannesburg following an earlier memorial service for Anton Hammerl Picture: JAMES OATWAY

Penny Sukhraj, widow of slain South African photographer Anton Hammerl, said yesterday it was difficult speaking about her husband in the past tense.

In a moving tribute at his memorial service in Parktown North, Johannesburg, yesterday, Sukhraj said: "This was not goodbye, only see you later.

"Life for him was really about reaping what you sow."

She said the last time they spoke, on the night before he was shot, he "glowed," adding: "He had the shine of a man who was absolutely alive."

Hammerl was with American journalists, Clare Morgana Gillis and James Foley, and Spanish photographer Manu Brabo, when he was shot in the Libyan desert near Brega, west of Benghazi, on April 5.

His body has yet to be found.

Sukhraj attended the service with the couple's children, Neo and Hiro, the photographer's daughter, Aurora, as well as a few dozen journalists and many other friends and family.

She said: "I missed you from the moment you left. I can't believe I will never again on this earth see your smiling sunflower eyes.

"There are so many things that we will miss about you. Your cooking. I miss you Anton. I can't believe you are gone."

Hammerl's friend Ziemek Pater battled to control his emotions as he described the good times they had had.

In a moving message his brother, Alex, said: "Anton was brave, special and undoubtedly one of the most important people in my life." He added: "There was never a dull moment in Anton's life. I'm still not too sure how I am going to carry on without him."

Gillis described the shooting as "a terrible accident". She added: "While I hope it makes us better people, and I know we all work hard at that, it doesn't fix us, or anyone else who feels a little bit broken by what happened. He believed in his job and worked hard at it, and loved his family more than anything."

In his tribute, SA National Editors Forum chairman Mondli Makhanya said Hammerl had lived his life to the fullest.

"We should be proud as South African journalists that we produced someone of his calibre," he said.