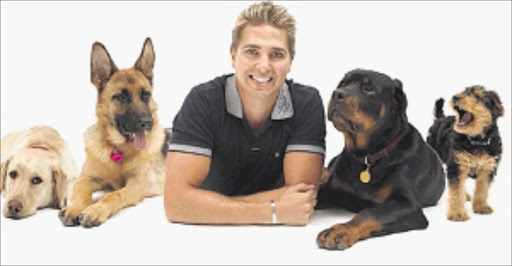 James Lech and dogs in a picture from his website

A rottweiler owned by "Africa's number one dog expert" and self-styled "dog whisperer" mauled a child in an upmarket Johannesburg mall.

James Lech, who describes himself on his website as "Africa's #1 and Dog Expert" [sic], had the "rehabilitated" dog with him in the Hyde Park centre on Monday when the incident occurred around 1pm.

Sadie Kukkuk, 4, was having lunch with her grandparents at JB River's restaurant at the table next to Lech and his canine friend which he claimed, after the incident, was a "service dog" . Security camera footage shows the rottweiler launching forward, grabbing the child and pulling her backwards.

Lech claims the toddler accidentally tramped on the dog.

Russell Tait, a business consultant who was having lunch at the restaurant, said he pulled the animal off Sadie, using a technique he learnt in a dog unit in the Defence Force.

"He was the hero," said Sadie's mother, Leah Sefor.

Sadie has puncture marks on the right side of her abdomen and has been treated by a doctor and a child psychologist.

When she arrived at the restaurant with her grandparents, Buster and Wendy Sefor, Sadie was introduced by Lech to his dog and he allowed her to pat him. The dog was wearing a red jacket that identified it as a "working dog".

This week Lech told the Sunday Times: "I am a dog whisperer." In a letter to the shopping centre's management, he claims: "I saw the child running, coming around the right of my table, jumping over the dog while he was lying down and resting and accidentally stepping on it at the same time."

When told video footage showed otherwise, he said: "I saw it with periphery vision because my head is tilted, correct."

The footage shows the child nowhere near the dog and simply runs past it while Lech is talking to someone. After the attack people gather around them while Sadie's grandmother is seen trying to help her.

Tait said: "Until I got there, nothing was being done. He [Lech] was standing there. The reason I noticed is because people where shouting at him. He was obviously the dog handler. He had a leash in his hand."

Sadie's mom has laid charges against Lech. She said the girl was "traumatised and sore".

Lech, meanwhile, said three times he had a medical condition that necessitated the dog's presence but refused to say what it was. "That's between me, my doctor and the magistrate judge (sic). I'm not confirming or denying anything."

Hyde Park shopping centre general manager Jacqui McGeehan said: "The landlord has a policy of not allowing dogs into its shopping centre, save for authorised service dogs. The dog in question is a service dog."

She described the incident as "isolated" and " regrettable".

Lech, whose website features a photograph of him with acclaimed US dog whisperer, Cesar Millan, describes himself as a "healer" and "shaman in the realm of dogs".