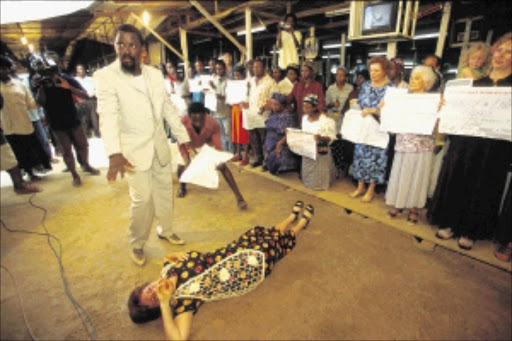 Pastor TB Joshua treats a South African devotee at the Synagogue Church Of All Nations in Lagos, Nigeria. Joshua claims to cure people of all afflictions, including HIV/Aids. Zimbabwean politicians have been flocking to Lagos, Nigeria for healing sessions
Image: Picture: GETTY IMAGES

Zimbabwean politicians have sometimes shown an affinity for the supernatural, with the classic example being that of self-styled spirit medium Rotina Mavhunga, who duped senior government officials a few years ago claiming that she had discovered diesel oozing from a rock.

In recent times Nigerian Pastor TB Joshua has become popular with politicians, who travel to Lagos to attend his sermons that are usually beamed on Emmanuel TV.

Joshua first drew local attention when he reportedly asked for his congregation to pray for President Robert Mugabe and Zimbabwe last year.

The Nigerian pastor has in the past been close to several African leaders. His rise to prominence was through Ghana's president John Atta Mills, who claims Joshua accurately told him the results of the election that saw him win the presidency.

The most senior politician to visit from Zimbabwe is Prime Minister Morgan Tsvangirai. Tsvangirai went to consult Joshua at the Synagogue Church of all Nations in Ikotun, Lagos, last year.

At the time, there was wild speculation that he had gone to strengthen his chances in the event that presidential elections were to be held this year.

Mohadi was one of the ministers who were seen sitting barefoot in front of Mavhunga. Mohadi's counterpart in the ministry, Theresa Makone from the MDC-T faction, also went to consult the Nigerian.

On her return she brought back "holy" water that she reportedly distributed to women at an MDC-T national executive meeting held in January.

Zanu-PF Member of Parliament and Deputy Minister of Labour and Social Welfare Tracy Mutinhiri also travelled to Lagos to meet with Joshua.

"It was a very good experience and spiritually motivating," Mutinhiri said.

On her return she preached a message of reconciliation among political activists who had been affected by the violence in the run-up to the 2008 elections.

Other than the political elite, Zimbabwe Football Association boss Cuthbert Dube has also made his way to Nigeria.

Dube went there soon after his election. He had problems walking and he was shown on Emmanuel TV standing up from a wheelchair after the famous Nigerian had said his prayers.

Zimbabweans apply to be invited by Joshua through an agent who then communicates with him.

A trip to meet the pastor costs an average of $1000, which includes return flights as well as food and accommodation in Africa's most populous country.

The two had a one- on-one session that was later up-loaded on YouTube.