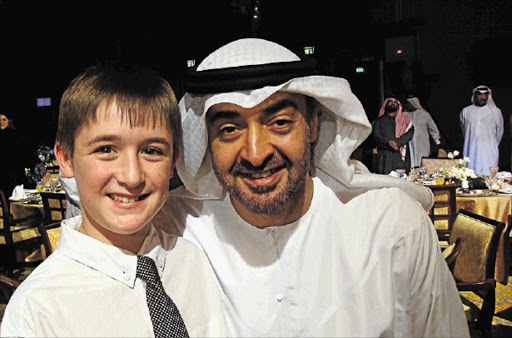 A South African boy has promised the crown prince of Abu Dhabi that he will not rest until he has saved the camels of the Arabian desert from extinction. Green Life spoke to award-winning conservationist Cameron Oliver about his unique and courageous mission.

You were just 12 when you launched "Cameron's Camel Campaign" two years ago. Where did you find the courage to take on something so big, so young?

When I was still at my old school - Abu Dhabi's Raha International School - our teacher asked us to create an awareness campaign about something bad that was happening in the world. After reading an article in the Gulf News about how litter was killing the Arabian desert's wild camels, I decided to make my campaign about them.

I got all my facts from the Dubai Central Veterinary Research Laboratory, which had been dissecting the camels' stomachs after they had eaten litter in the desert. It was then that I realised how big the problem was and that I wanted to take it on as a full-on campaign beyond the school. Going bigger scared me at first, but then I realised I was trying to save something and that gave me courage.

Were you shocked by the state of the desert when you moved to the United Arab Emirates with your parents?

When I was still living in South Africa I thought the Arabian desert was this extremely clean and exotic place but, when we moved to Abu Dhabi in 2007, I realised the wind was blowing a lot of urban litter deep into the desert, and my face just dropped. You know, when wild camels see litter they think, "Ooh, this is new" and they eat the plastic, which then becomes like a hard rock inside their stomach and they can't poo it out.

This fools them into thinking they're full and should stop eating, and this is how they starve to death. The domesticated camels are forced to wear muzzles so they cannot eat the plastic.

The Abu Dhabi Authority for Culture and Heritage says there are 178000 camels in the UAE. That sounds like a lot. Why should we be worried then?

Well, I felt this real betrayal when I found out what was happening to the camels - for centuries they took humans through the desert and gave us their skins, meat and milk.

Now we're killing them with rubbish. There were 178000 camels back in 2003, but today one in every two wild Arabian camels is dying from litter, all of which is created by new buildings and more people and tourists. There must be a lot fewer camels today than eight years ago. It's incredibly scary to think this animal, which is probably the only large mammal in the desert, could be extinct soon.

What have you done for the camels since launching your campaign?

It's an awareness campaign, but I've done a whole variety of stuff. In 2008 I launched a clean-up with the Abu Dhabi 4x4 Club, which means that every year we take about 30 4x4s into the desert to clean up the litter. This year I've also launched a schools clean-up campaign to celebrate World Environment Day and 32 schools in the UAE took part. I like speaking to kids at different schools and do that about once every two weeks. It's also cool that the Dubai Mall - the largest mall in the world - has shown my campaign bumper sticker on massive public screens for a whole month.

I've also done TV adverts, been interviewed by media from all over the world, like Reuters, and I've just finished a documentary with a local celebrity Ali Alsaloom. I've spoken at leadership conferences and am now the youth spokesman for two government anti-litter campaigns. In 2009 I won the International Young Eco-Hero Award and, the year before that, Crown Prince Mohammed bin Zayed Al Nahyan gave me the Abu Dhabi Award. I was the youngest-ever recipient of this award and I promised His Highness I would not stop until the camels stopped dying.

Where have you found the money to do all this stuff?

Well, my dad, Mark, who is a general manager at a fashion company here, and my mom, Michelle, an office manager at a local law firm, really love their animals and have helped a lot. Like the other day they helped me print campaign T-shirts, caps and 10000 bumper stickers, but I am looking for a sponsor.

How have the Abu Dhabi locals responded to a young foreigner trying to change the way they do things?

The locals have been slow to respond - they're also the ones who take their camps into the desert and leave their litter behind. But that's just the adults. The kids really love the campaign's message and I've had a huge response from schools. A presentation I gave to 80 government officials last year was also very interesting. They were astounded. They never knew what was actually happening in the desert.

What's your next step? And your biggest dream for Cameron's Camel Campaign?

I have a whole list, like promoting my campaign in more malls and getting my bumper stickers out on billboards, taxis and streetlights. But my biggest dream is simple. I just wish people would stop littering. My life-long dream is to meet Madiba and share my passion with him.

What do you want to be when you grow up? A conservationist?

No, although I do want to continue with my campaign. I have a big passion for strategy. I love animals and all that, but I really want to be the strategy guy for the Royal Navy. - For information, visit www.cameronscamelcampaign.com

Oceans and beaches all over the world are now full of plastic. To help combat this problem, appliance manufacturer Electrolux is collecting plastic waste from the marine environment and using it as innovative decorations for a demonstration range of eco-friendly vacuum cleaners.

Several "Vac from the Sea" vacuum cleaner designs have already been launched overseas, each representing a unique maritime conservation initiative.

The South African design, which will be created from plastic collected by divers in Hout Bay harbour, will be unveiled in November. See Vac from the Sea's Facebook page for more.