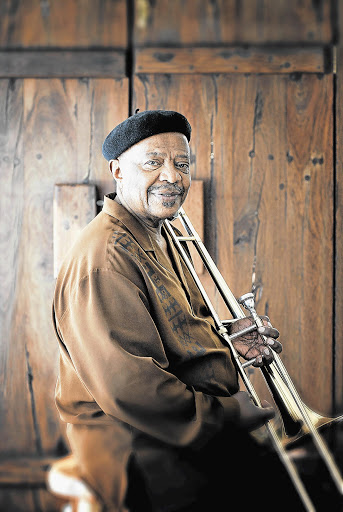 'I never had the notion of being a big star or having big money,' says Jonas Gwangwa, who spent many years in exile

The jazz trombonist on hard times, good manners, and the importance of home

Born in Orlando East in 1937, trombonist, vocalist and composer Jonas Mosa Gwangwa is one of South Africa's most influential jazz musicians. Gwangwa left South Africa in 1961 after touring abroad with the musical King Kong. During his 30 years in exile he remained a vocal opponent of apartheid, as the composer and artistic director of the Amandla Cultural Ensemble.

Gwangwa also co-created the Oscar-nominated original score and theme song for the 1987 movie Cry Freedom. He returned to South Africa in 1991. Gwangwa was given a meritorious award from then-President Nelson Mandela in 1995, and received the Order of Ikhamanga in Gold in 2010. He lives in Joburg with his wife, Violet, and has six children, 17 grandchildren and three great-grandchildren.

Young musicians should learn their craft before they get on stage. They're all in such a hurry. They don't respect music. They just want to be famous for a day. Music should last. If music doesn't last, the person behind it doesn't last. I never had the notion of being a big star or having big money. I was just into the music. When I was touring in London I realised I wanted to go to school, to go to the jazz well: New York. I didn't know how it was going to be taught. I just wanted to be a better musician.

Music was what sustained me during hard times. When I moved to New York it wasn't easy. Money was very limited. Hugh (Masekela) and I would open a can of Campbell's soup and get not much more than the smell, because we added so much water. School (the Manhattan School of Music) was a challenge. One year, one of my music theory teachers came to me and said: "Jonas, what you are doing is right. But you don't know what you're doing." I said: "But I hear it." He told me he would flunk me, and he did. I repeated that class, what else could I do? But it killed me inside.

When I came home I had to re-learn Joburg. At the time I left, there were no highways. When I came back everything had changed. I left as a top jazz trombonist. I have had to start from scratch and cultivate what I could. The only thing that has remained is my music style, playing music my way.

It's hard to go out there and be "me, me, me" ... As good a musician as I am, I think perhaps that has made me miss out. I'm not the talkative type. I am only loquacious through my horn.

Politeness is important. I worry that it doesn't exist among some young people any more. Youngsters come up to me and call me "Jonas", or address a room of elders as "you guys". I have gone through hard times. I was called a "k*ffir". Then I was a "native". I fought to be where I am now, and I expect to be called Mr Gwangwa.

When you plant a seed, it decays a little bit before it sprouts. This is how my wife explains our country right now. We achieved so much following the end of apartheid. Now we are going through some rot. It is this that bothers us: how long is it going to stay this way before we sprout?

I love challenges, but I also know what I can't do. My father was a carpentry instructor, teaching at five schools. He could fix his car, fix anything in the house. One day my mother was given a clock that wasn't working. We took it to an old man who fixed clocks. After three months he'd done nothing, so my father took it back and said: "Son, we're going to take it apart - just remember to take it out in order so we can put it back together again." My mother stormed out the house in anger. She said we didn't know anything about clocks, didn't know what we were doing. But we found the broken part, went to town to buy a replacement. My mom came back and the clock was ticking. I've learnt a lot like that. I like to do things with my own hands. I used to do upholstery, fix up my own shoes ... These are the things my father did without thinking. But I still need experts. I like working with professionals: scriptwriters, choreographers, dancers and other composers.

Home is South Africa. It's not wherever I hang my coat. I travelled on so many passports after my South African passport expired. At that time, as an African, your passport was only valid for one year. Miriam Makeba organised me a Guinea passport. When that expired I got a Zambian travel document, then a Tanzanian one, then a Ghanaian passport. At airports you get immigration queues for "locals" and for "others". I had always been one of the others. Then, one day, I got my South African passport. And it was valid for 10 years. It was like: wow, you know, yeah. Hallelujah.

You don't retire from music. I'm still hoping to make it.