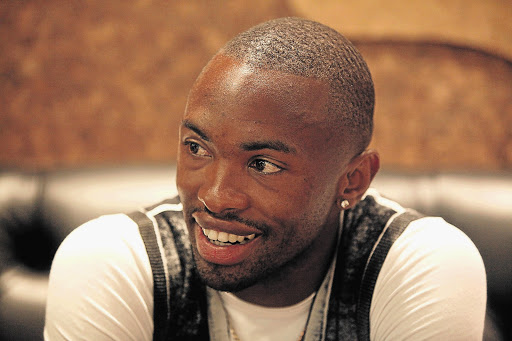 Bernard Parker likes to keep things strict and to the point

Striker for Kaizer Chiefs, the 'glamour boys' of South African soccer, Parker still likes to chill on the corner with his friends

I am ... positive under difficult circumstances. And a quiet boy who likes to be among people.

Where were you born? Joburg.

Where do you live? Boksburg.

Who do you share your house with? My wife Wendy and our two children, Skye, 7, and Storm, four months.

How did you get into your career? I started playing soccer in primary school and then my teacher sent me to the Soccer School of Excellence. I was there for four years and, when I graduated, I went into the Sundown's reserve team for two months. Things didn't work out so I joined Benoni Premier United. I played there for two-and-a-half years, then played at Thanda Royal Zulu. After that, Red Star Belgrave in Serbia, FC Twente for two years, and now I'm at Kaizer Chiefs.

What would people be surprised to know about you? That I'm straight forward, strict and straight to the point.

What has been the most memorable moment in your career? When I scored two goals for Bafana Bafana in the Confederations Cup against New Zealand and won Man of the Match.

Who do you think are some of the greatest soccer players in South Africa? Benni McCarthy. I still believe he's the most successful footballer we've ever had. He has achieved everything and played at the highest level for years. He's got a medal from the Champions League, which no other South African has achieved. I believe that, as young strikers, we should look up to him.

When I'm not working? I like to visit friends and family. Or chill with the guys that I grew up with in Reiger Park. We still chill on the corner. If I'm not doing any of the above, then I'm playing PlayStation at home.

You were among the Bafana Bafana players who celebrated after the goalless draw with Sierra Leone thinking that the team had qualified for Afcon (Africa Cup of Nations) when you actually hadn't. What happened when the team found out that they hadn't qualified? When we got into the change room, team manager Barney Kujane told us that we didn't qualify. The technical team explained to us, but we didn't understand so we asked questions among ourselves. Then suddenly everyone was quiet and all our heads dropped in disappointment. We just thought about all the preparation that we had gone through. The level of disappointment in that change room is actually indescribable.

What's your greatest extravagance? Furniture for my house. I buy stuff that I like and that's trendy at the moment. I like changing the décor of the house quite often. The latest thing that I bought was a 3D television.

What's your most treasured possession? My house. Nothing is as important as having a roof over your head. And as youngsters we always wanted to grow up and have a better roof over our heads.

I'm predisposed to ... Chewing my nails. I know it's a bad habit but I can't help it.

What's your favourite building in Joburg? The Vodacom building in the CBD. When you see it from a plane, you actually feel that you're back home.

What's the ugliest thing about Joburg? The road construction. It looks so untidy and it feels as if it's taking forever.

What is the most memorable moment you've had in Joburg? After a win, I went on a team-building exercise with my team- mates at Kaizer Chiefs. We went to a nightclub called Hush in Rosebank. We had the best time and we really bonded.

How do you get around? BMW M3.

I can't go a day without ... My phone. I use both the iPhone and BlackBerry. I check my e-mails, SMS and Facebook on my phones.

If you inherited R100-million, what would you do with it? I'd help children from poor backgrounds. I would provide them with food and shelter and make sure they had better living conditions.

What CDs are you playing in your car? Chris Brown's new mixtape. I also listen to a lot of radio - Metro, YFM and Kaya FM.

If your house caught fire what would you save? If my family was safe, my watches. When I travel, I always buy watches.

I always collect ... watches. I have watches from Hublot, Rolex, TW Steel and Gucci.

What are your creature comforts? My PlayStation.

When I go out at night ... it's usually to hang out at a friend's house and have some drinks.

My friends and I like ... Fifa 12. We are so obsessed with it. If we are playing PlayStation, that's the game we're playing.

Have you ever taken public transport in Joburg? When I started out, I used to use the taxis or the train to go to training. I haven't used it recently.

Everything in moderation but ... Sneakers. I have so many pairs of sneakers. Sometimes I'll go to a shop and buy a pair, and when I get home, I'll realise that I already have the pair I just bought.

I met my partner ... at Total Sports five years ago. She used to work there and I used to browse in the shop. I would see her but I just didn't know how to approach her. The guys that worked in the shop recognised me and I left my number with one of them to pass on to her.

If money could buy happiness? Then it wouldn't be pure happiness.

Watching soccer: I need to keep updated with what's happening.

Washing my car: I like it to be clean and smell fresh.

Chilling with the guys I grew up with: I'm interested in what they're doing and what's happening in their lives.

Energy drinks and water: As a soccer player, I always have to keep hydrated.

Trucks in traffic: They go so slowly and make you late. They are the ones that actually cause accidents.

Dirt: I like a clean yard, car and clothes. I don't compromise on this.

Nagging people: People usually take my kindness for weakness and therefore think they can nag me.

Short training sessions: I believe I shouldn't get home feeling fresh after training, because then it was a waste of time.

I do most of my shopping with my family here.

I love going there to buy stuff for myself and my wife. I can't leave this shop without getting something for her.

My friends and I like Gucci sneakers, so we always go check out what's new.