The allure of demure 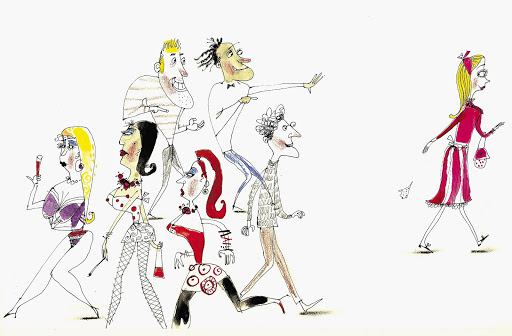 Is this the woman men fall in love with? Lin Sampson examines the new sexy

The night has a lot of heart, one of those evenings when everything comes rippling towards you with a life of its own. A girl takes off her top and dances on the table.

There are 12 of us and in the morning most of the women recall a girl dressed in hot scarlet as brief as a bolt of lightning and the colour of congealed blood.

But the men remember another girl.

She is duskily powdered and rouged in the creamiest pink and wears a lace collar. She says nothing: just smiles. Her voice is so low it sounds like falling leaves; when she talks you have to lean towards her. Her soft eyes pull you.

"My god, what a woman," a male guest says on the phone the next morning.

I say: "I so loved it when she danced on the table. Was she wearing knickers?"

"Oh, I don't mean that girl, she seemed a trifle soiled. I really liked the girl with the blonde fringe."

"Yes, that girl. When she left she whispered to me: 'Just remember that the fact that you're alive means someone cares for you.'"

Well, that's a burning come-on for such a weakling.

Demure is the new sexy. Men cannot resist a lowered eyelid. Consider Kate Middleton. There were a hundred girls going for William, girls who could take their clothes off and dance on tables, girls with acute mathematical brains plus race-horse legs, girls with matchless pedigrees, daughters of earls and kings and then there was Kate, heir to a business selling trumpery, but a girl versed in the biblical knowledge of how to get a man, a girl whose high spirits were doused with a terrible refinement learnt from mum, a girl as faithful as a crippled dog, a girl who knew how to keep her mouth shut and wait - the only girlfriend who managed not to say something silly to the press or be heard on an open microphone calling the Queen an old cow or, like her dead mother-in-law, blurting out delicious confessions to a hack.

In other words: a Demure.

And let me tell you, there is not a man in this land who does not desire Kate Middleton.

According to a local dating agency, "demure" is the most used word in ads where men are looking for women. "Dainty" is also popular.

But the people who have been dented by a Demure know there is always another face. Consider Rooney Mara for example. She started off in the movie The Social Network, more demure than a hybrid rose, all ruffles and fringe and baby-doll dresses. Her skin was porcelain and her eyes so lowered they looked as if they had fitted blinds and she talked in a tiny croak.

Recently she emerged as The Girl With the Dragon Tattoo.

The thing with Demures is, you don't really know anything about them until you want to chuck them. Scroll down a Demure's BlackBerry and there will be every lawyer in town. Demures like litigation because they are good at it (many are lawyers). They have kept the rude note you wrote, they have photographs of the car you kicked in, they have taped your telephone conversations. All with lowered eyelids.

And it is no good saying outside the divorce court: "And she seemed such a sweet girl."

Demures are made for the workplace, where they are known for keeping the balance and not causing offence. They wear casually chic tailored separates, collegiate blazers and a lot of navy. They love nothing more than a single diamond on a gold chain. They never swear and when someone is rude they always say: "Shame, she's really hurting inside."

The Demure lives within the glossy pages of a woman's magazine and longs to be called an interior decorator extraordinaire and to have four glass vases in a row, with one flower in each, and to have just gone through a life-threatening divorce. She doesn't read books but loves quotes from literary cons such as Alain de Botton: To pursue happiness is great. But to be productively unhappy is where it's at. Huh?

Here is a story: Am driving on the famous N2 killer tarmac, the roadside is crowded, people wanting to go to Elgin, holding up signs. An old woman sits on a blanket and cries. The man who is driving speeds past these bedraggled edges of humanity, but a little way beyond, a Hyundai i10 is pulled up. A girl stands beside it. She is wearing a white shirt and jeans and she is half-waving a small frail hand. Her face says: "I don't often do this." She is standard Demure.

The man screeches to a halt, out of the car, around the car, up and down the car, all macho tool kit and mechanical diagnosis.

No petrol? No petrol.

"Silly me," says Demure, as man gallops away with cans and funnels. When he comes back her gentle eyes fill with tears, little drops of moisture whisper down her face. "Oh, I have been so stupid, I left my wallet at home, could you possibly lend me R500, just to get me back. I'll return it tomorrow."

Man ponies up and telephone numbers and addresses are exchanged. He never hears from her again.

Demures might not be rich, intense or vivid in colour, but they do have a place in the herbaceous border of life. They are those small blushing flowers in the front nodding prettily away. It is only when you dig them up you find their long tenebrous roots have strangled every other plant in the bed.

Demure is a terrible act of public decency and should be banned.