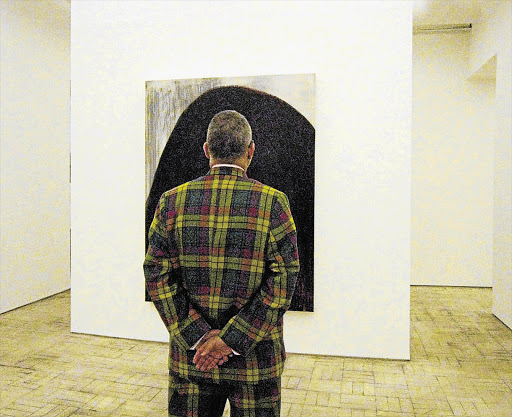 This posse of schmooseoisie, polished, primped and sufficiently flexuous to do a bit of iPhone texting while holding a conversation, a glass of wine, a camera and a cellphone - and at the same time indulging in some serious shoulder surfing - checking if there's someone further up the social ladder you haven't yet air kissed.

The art-exhibition-opening crowd has become a brand. They all suffer from something called FOMO, the fear of missing out on anything that might lead to meeting someone better connected than the person you are talking to.

Here are some regulars: Andre Vorster, originator of Mother City Queer Project, would go to the opening of an envelope; Jeannette Unite, hugging everything in sight, even the pillars; George Reeves with his long flicky hair; photographer David Lurie, John Caviggia, career eccentric.

Here is Malibongwe Tyilo, who has never missed an opening and writes a very funny blog, "Skattie what are you wearing?"

Here are the twins, always on the look out for women and anything going free for the Previously Disadvantaged, and writer Roger Young, glass of wine in a hand that has gripped so many glasses it has become genetically modified.

"I only go to an opening when I know the artist and the drink is free," he says.

Here are art agents and their soft-necked international girlfriends trying to suss out if a few scribbles might one day turn into a William Kentridge.

Here are artists such as Sue Williamson, who has been described as someone who brings "the marginalised into the mainstream", which might be why a bemused car guard is gazing at a picture that looks like gorilla snot. There are gallery owners such as Dan Halter of whatiftheworld - "I deal with notions of a dislocated national identity."

The saddest group is made up of middle-aged yestereves who look as if they have been on a mini-botox break, searching for horrible old love. "Well, you never know who you might meet," said one woman in her late 50s, dressed up to glory be.

Nobody looks at the art. When I ask a girl who the artist is, she answers: "The what?"

Most people have stopped guessing what the art means, although they know it will have something to do with feminist theory/gender borders/inner conflict and apartheid. God knows what the local art world would do without apartheid.

Here are the usual bunch of artfaggots and men turning into women and vice versa, emerging like butterflies from the cocoon of gender disorientation; and a lot of young hipsters who use art openings as a teaser before going on to clubs.

Here are ancient photographers who are still caught in the grasp of the 1960s cult-movie Blow Up and call girls "babe". A man with grey hair tells me: "I am a man in my 50s and I need to go to bed every night with a much younger woman."

Here is the Frenchman with a ponytail.

When your social life consists of art openings, you become a bit of an art piece yourself: a richly shaped girl in brown and cream with a barcode hairstyle: Eitan Karol in supertweed the colour of chewing gum.

The galleries themselves go for the concentration-camp aesthetic, no aircon (on the hottest night of the year) and nothing that isn't attached to a wall. One expects to be strip-searched at the door.

The recession has put an end to refreshments, which is a bummer. You are lucky if you get a glass of wine. A gallery in Joburg used to have openings catered with pricey French cheeses, but had to stop because so many people sliced off chunks and slipped them into their handbags.

And, to boot, gallery owners report a worrying trend in disappearing loo paper. No doubt, as we speak, someone is working on a piece entitled Bum Rap, exploring the borderline between tangible, intangible and the abused woman. And apartheid.

If you crack the nod, you might be lucky enough to get to an afterparty of, say, Baylon Sandri of SMAC gallery in his restaurant La Perla - but don't bank on it.

The leitmotif tonight appears to be animal skins and the F word, always a big favourite among artists, written backwards, with an umlaut, an accent grave and finally just scrawled across walls. In a way it's quite apposite, because if the art opening is anything, it is an advanced F-search.

All galleries have their aficionados. If you go to iArt, you are likely to see Zwelethu Mthethwa; Stevenson draws people like Andrew Lamprecht and the Michaelis crowd, and if you dare Goodman you'll get Viv Cohen and maybe Beezy Baily. Christopher Peter of the Irma Stern runs a very civilised operation and you might be lucky enough to meet the smart southern suburbs set if they're not in rehab.

The opening crowd have one thing in common: they have never been known to buy a piece of art. The real buyers go to private openings; people like the big Mauritian buyer, often talked about, never seen, and Mark Coetzee, personal adviser to Puma's Jochen Zeitz, or Laurence Graff, the owner and visionary behind Delaire Wine. The Ruperts.

The thing to remember is that the hoi-polloi opening can never ever be chic/smart/upmarket/ platinum/gold/desired. We're not talking Royal Enclosure Ascot here.

Seth Rotherham of 2oceansvibe radio station says: "Nobody who cherishes their free time goes to the lower-end faux-fab almost-daily art exhibitions and openings. These people blow their money on clothes, hoping to speak to B-list celebs so they might even (God willing) make the social pages. They have twitter bios like 'Cape Town #1 Socialite' and feed themselves at the launches, having blown all their money on clothes. They usually smell cheap from the free deodorant they got in the goody bag from the previous opening."

Yep, African art might be trending now (I have been waiting for years to use that terrible expression), but the art exhibition opening remains the Kentucky Fried of all social dos.