DEPUTY President Kgalema Motlanthe's partner, Gugu Mtshali, has been implicated in soliciting a R104-million "bribe" to obtain government support for a South African company trying to clinch a R2-billion sanctions-busting deal with Iran. 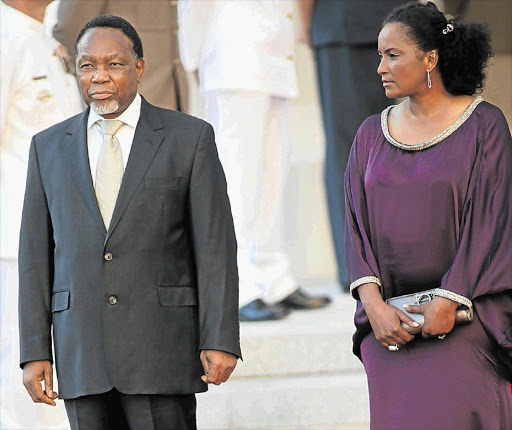 Mtshali and associates of Motlanthe, including former De Beers executive Raisaka Masebelanga, met delegates of Cape Town-based 360 Aviation at a Bryanston, Joburg, restaurant to discuss "buying" government support for the deal on February 17 2011.

Barry Oberholzer, MD of 360 Aviation, said: "We believe we were being asked [for] a bribe ... in exchange for [government] support."

By then 360 Aviation had been instrumental in supplying Iran with a Bell helicopter, spare parts and three airliners via South Africa through an ingenious sanctions-busting scheme - but the company needed top-level political support to pull off a new deal.

This week, Motlanthe said he had no knowledge of his partner's involvement with 360 Aviation.

The deputy president's spokesman, Thabo Masebe said: "He has at no stage discussed such a matter with any person, including the Department of Trade and Industry.

"The deputy president did not meet with 360 Aviation in the manner suggested or at all."

However, 360 Aviation director Marcel Oberholzer confirmed to the Sunday Times this week that he had in fact met Motlanthe in June 2011 with Masebelanga, although they had not discussed the deal.

The plan, which ultimately collapsed, would have seen a politically connected South African front company, set up by 360 Aviation, win a five-year contract worth at least R450-million a year to supply US-made Bell helicopters and parts to the National Iranian Oil Company.

Through access to recordings and confidential documents - understood to have also been obtained and analysed by US intelligence agencies - and interviews with three sources directly involved in putting together the deal, the Sunday Times has established that:

In written responses, Mtshali told the Sunday Times she had "never attended a formal meeting" with 360 Aviation. After being sent the recording on which her voice can be heard, she refused to comment further. But the Sunday Times has learnt that she privately admitted being "introduced" to 360 Aviation MD Barry Oberholzer.

These revelations of how Motlanthe's romantic partner was involved in a bid to "sell" government support come as Barry Oberholzer spoke about his role in setting up the scheme, and how US intelligence had sought his assistance in nailing Iran sanctions-busting schemes.

Barry Oberholzer told the Sunday Times the purpose of the Bryanston meeting was to secure a support letter for the Iran deal from Motlanthe, through his associates.

"This was primarily for political protection from prosecution and assistance at a high level in Iran," he said.

His explanation is supported by a recording of the meeting, which leaves no doubt that the discussion - held in the presence of the deputy president's partner - was about how to "buy" government support for a lucrative sanctions-busting opportunity.

The price: an upfront R10-million "consultancy fee" and shares worth an estimated R94-million.

Masebelanga clearly spells out his ethos of government support for sale: the R10-million fee to get the ball rolling. "There is nothing for mahala," he said.

In the recording, mysterious North West businessman Joe Mboweni says he works "on instructions from mama", which is understood to be Mtshali, and adds that he is "obviously" interested in discussing the profit share. To which Mtshali is heard saying: "Joe will be instructing."

Mboweni adds: "When you are a politician you are not just political, you must also look at the commercial side."

He says "Rai" (Masebelanga) should negotiate a "relationship agreement" that will define the "equity and roles of each party" in the deal, then get "the letter".

Attempts to reach Mboweni were unsuccessful.

Two months later, on April 12, Le Roux signed the "letter of support" saying the Department of Trade and Industry "supports the initiatives by 360 Aviation" as it "welcomes the expanding trade and investment relations with the Islamic Republic of Iran".

That same day, Moeketsi took the letter to the Intercontinental Hotel at OR Tambo International Airport and gave it to Barry Oberholzer.

On April 18, Moeketsi sent Barry Oberholzer an e-mail headed "Iran agreement and passport photos." Attached were copies of Mtshali, Masebelanga and Moeketsi's passports, and the "commission agreement in respect of consultancy to obtain government support letter".

The agreement, signed by Moeketsi and Masebelanga, clearly lays out the terms: they will "obtain a support letter from the South African government" in exchange for a fee of R10-million, to be split 50/50 between them.

Although Mtshali is not mentioned in that agreement, the recording of the Bryanston meeting suggests she was part of the overall plan.

At that recorded meeting, Masebelanga tells Barry Oberholzer that: "In this, I am not alone, so I have to discuss this with everyone, and Joe, [who acts for Mtshali], is our point man."

This suggests that the payments would be shared between all the parties, not just Masebelanga and Moeketsi.

"If the deal had gone through, we would have paid that R10-million," Barry Oberholzer told the Sunday Times.

But 360 Aviation did use the letter for another deal - to buy, from a US supplier, Bell parts worth R2-million, which are destined for Iran. The Sunday Times understands this is of interest to US intelligence agencies.

The US embassy would not confirm or deny this, or that Barry Oberholzer had passed information to its intelligence agencies.

When the Sunday Times confronted Masebelanga with the agreement, he said "I regret it" and that it was "a bit inappropriate, unfortunate".

Later, however, Masebelanga sent a written response saying that the contract he had signed was "doctored beyond belief", as it did not include the full intentions of the parties.

This is contradicted by his business partner and former Land Bank executive , Moeketsi, who confirmed to the Sunday Times that he had obtained the support letter from the DTI, and that he was expecting R5-million for doing so.

Masebelanga also denied that Mtshali had ever "had a meeting" with Barry Oberholzer to discuss the deal, despite confirmation from a number of people involved that they did indeed meet.

"If you wish to, crucify me on the cross of [a] lack of foresight about how the proposed business turned out, but leave [Motlanthe] and Gugu out of this."

Masebelanga did admit, however, that he had planned to "bring in" Mtshali and Mboweni in his business deals with 360 Aviation at a later stage.

Mtshali said she had "no knowledge of the letter from the DTI" and "has not been party to any agreement with 360 Aviation".

Though she admits providing her passport to Masebelanga, she says this was for him to arrange for her "to travel to Botswana".

However, e-mails from Moeketsi to Barry Oberholzer, titled "Iran trip", include copies of Mtshali's passport. When it was put to Moeketsi that the documents clearly implied he had helped facilitate Mtshali going to Iran to clinch the deal, he said "yes".

Motlanthe himself denied any knowledge of the deal or 360 Aviation , or that his associates tried to "sell" government support for the sanctions-busting deal.

But this was contradicted by Barry's Oberholzer's brother, Marcel. He said he had a "meet and greet" with Motlanthe at a private home in Houghton.

Marcel Oberholzer said: "We didn't talk much or discuss our business dealings. He wished us well and thanked us for our visit."

The DTI said it was "disturbed by allegations that a letter issued with bona fide intentions could be used to allegedly solicit bribes, or to contravene international agreements".

Spokesman Sidwell Medupe said the DTI would consider launching a probe, as the letter was provided for free "to assist a South African company operating in a challenging environment".