THE seaside village of Hout Bay is famous more for fishing than high fashion. 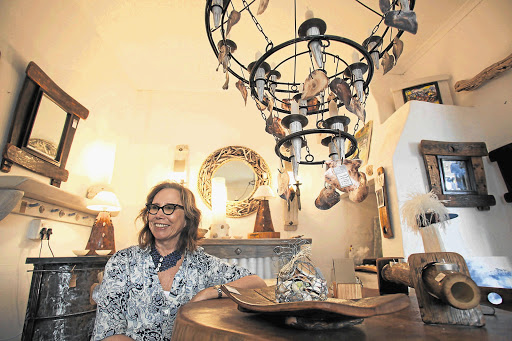 SQUASHED BANANA: Mijou Beller, owner of what was once Dolce and Banana in Hout Bay Picture: SHELLEY CHRISTIANS

SQUASHED BANANA: Mijou Beller, owner of what was once Dolce and Banana in Hout Bay Picture: SHELLEY CHRISTIANS

But it is the centre of a legal clash between major Italian fashion house Dolce & Gabbana and a cheeky gift and jewellery store in the southern Cape Town community.

Lawyers acting for the luxury fashion house - which sells designer garments, handbags, shoes and make-up to wealthy customers around the world - are not amused at the owner of Dolce and Banana.

The shop was founded 12 years ago by Mijou Beller and sells jewellery and gifts made of shells, beads and wood. It employs three women from Hout Bay's Imizamo Yethu township.

Dolce & Gabbana advertised its Rosa handbag, overlaid with lace, for R20280 this week; Dolce and Banana was selling leather pouches embellished with beads for R220.

Beller has now been accused of making a mockery of the global fashion brand and infringing on its trademark. In a 300-page dossier before the High Court in Cape Town, Christiana Ruella, a board member of Gado, Dolce & Gabbana's holding company, accuses Beller of "objectionable conduct" and of "diluting" the luxury brand's name.

Ruella says in an affidavit: "The name Dolce and Banana makes a mockery of the well-known trademark, Dolce & Gabbana."

In court papers, the company, founded by designers Domenico Dolce and Stefano Gabbana in the Italian fashion capital of Milan in 1985, lists its wholesale revenue for the financial year of 2009 and 2010 as R14-billion.

Beller said this week that her shop's name was tongue-in-cheek and fun. "I loved watching tourists driving by, smiling, slowing down to take pictures of our funny name," she said.

In her affidavit, Ruella says the company is also concerned about Dolce and Banana's association with "Hout Bay Fashion Week".

She said: "There is every probability that the use of Dolce and Banana in relation to jewellery and T-shirts, as well as their involvement with fashion weeks, would be likely to cause deception or confusion."

Beller said "Hout Bay Fashion Week" had been a joke. "Someone came to borrow some jewellery at my shop for a photographic shoot. Afterwards, I put the pictures on my blog and called the entry 'Hout Bay Fashion Week'. Obviously they found it online and didn't like it one bit."

Beller has had to rename her shop Banana and is busy removing all signs of "Dolce and Banana" branding.

"We don't have the money to fight them, so decided to change the name. So long, Dolce! Thanks for the good times."

She said the changes cost her in the region of R10000.

But negotiations between Beller and the Italian company are not over yet. Apart from the rebranding, Dolce & Gabbana is demanding that Beller pay R100000 of the R220000 in legal fees incurred when the case went to court.

Dolce & Gabbana's local lawyer, Herman Blignaut of Spoor and Fisher, said Beller had been warned twice before the case went to court.

"The first warning was six years ago, which she simply ignored. I take my instructions from an Italian law firm that represents Dolce & Gabbana. The R100000 forms part of the settlement negotiations, which are under way," he said.

Beller said paying the R100 000 in legal fees would ruin her business.

"I would have to sell my house. We've got a small business, we're not rich," she said.

In a letter, she wrote: "Dear Stefano, please let us be. And visit us in Cape Town. I have always admired your famous sense of humour so present in your brand and in your designs. And although I appreciate that Dolce & Gabbana is a very successful commercial enterprise, I fail to understand why Dolce and Banana is a threat."