Gauteng's hospitals are under siege as doctors, nurses and patients battle with broken equipment, shortages of linen, medicine and food, flooded theatres and no telephone lines. 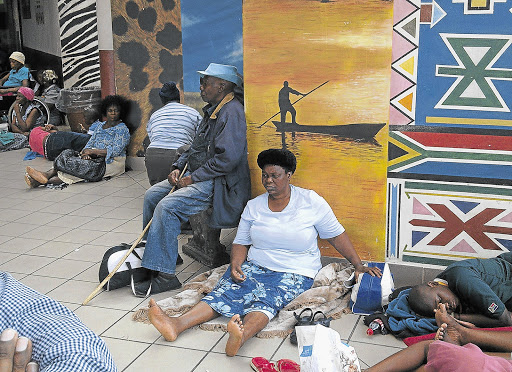 STRANDED: Patients wait for help outside the Steve Biko Academic Hospital in Pretoria

STRANDED: Patients wait for help outside the Steve Biko Academic Hospital in Pretoria

Conditions at South Africa's biggest hospital, Chris Hani Baragwanath in Soweto, have been described as "disgusting".

Last week, one of its theatres was flooded and a hole had to be dug in the theatre to drain the water.

The hospital was plagued by power cuts, said a doctor, and was currently short of 25 basic medicines.

Cancer patients at Steve Biko Academic Hospital in Pretoria were recently turned away because two radiation machines were not working.

Patient Paul Kaminski, who underwent surgery at the h ospital on March 6, was discharged three days later because of the shortage of beds in the surgical ward .

Five days later, Kaminski, who had nine lymph glands removed under his right arm, eight of which have since been found to be cancerous, had to be readmitted after he started haemorrhaging badly.

When the Sunday Times visited the hospital, two of the 10 lifts were out of order.

At Charlotte Maxeke Johannesburg Academic Hospital, a radiation machine could not be repaired because of a payment dispute with the service provider.

There was also a shortage of equipment and medicines, a nurse said.

She said that for the past two months the hospital had been hit by a shortage of dairy products, tea and sugar, with patients having to rely on their families and relatives for supplies.

"The staff also had to bring sugar and tea from home ... it is annoying when the government is unable to provide for the patients," she said.

Telephones at Natalspruit Hospital in Alberton have not been working for a month, with a hospital staffer saying that doctors and nurses had to use their own cellphones.

At Tembisa Hospital,linen shortages mean there are not enough blankets or even sheets for patients, and staff are not provided with the necessary aprons, gloves and goggles when they deal with patients with infectious diseases.

One patient, who did not want to be named, said he was only admitted 12 hours after arriving at the casualty section.

Gauteng Health Department spokesman Simon Zwane said the hospitals were overburdened because of HIV/Aids, trauma and the migration of patients from other provinces.

He said: "Services at Bara are particularly under pressure because it is the only hospital in the south of Johannesburg servicing Soweto, Lenasia, Eldorado Park and Orange Farm."