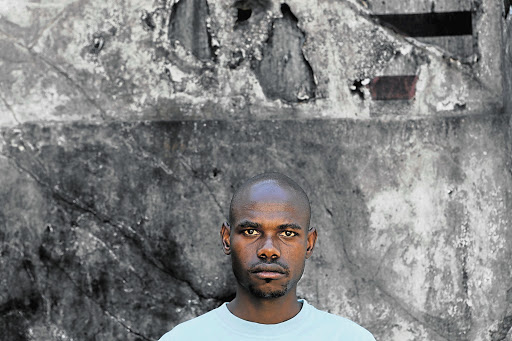 ART OF SEEING: Blessing Ngobani will spend three months being mentored by some of SA's best artists Picture: JAMES OATWAY

Blessing Ngobani, 27, has just been announced as this year's recipient of the Reinhold Cassirer art award, funded by Nobel laureate Nadine Gordimer in the name of her late husband.

Ngobani nonchalantly says he's been "12 years in the industry", yet this simple statement belies his troubled past. He ran away from an abusive home at six and lived alone in the bush. Then things went from bad to worse.

"I was the child of a single mother in Tzaneen, Limpopo. She cared more about finding herself a new man and left me with an uncle who was abusive when I was maybe six or seven. And he treated me roughly. He denied me schooling and made me look after the cattle.

"I ran away and stayed in the bush. I developed a fear of human beings. My mother came to fetch me a few years later. She wanted me to stay with a stepfather ... I was terrified of him and didn't trust him. I moved out on my own."

He was about 11 or 12. "I went to Alexandra township and was sucked into gangster life. What does a rural youngster know about life in the city? In 2000, I was arrested as an accessory to robbery, and went into juvenile prison at Leeuwkop. I was sentenced to nine years."

This was his turning point; he took advantage of the projects offered, doing a course in motor mechanics before he discovered art.

"I began to draw deeply. I made portraits and still lifes.

"I was influenced by the art of Gerard Sekoto. My challenge was to keep myself encouraged, by making art, but also by doing research. I read a lot. I taught myself to read in prison. I have been knocking on doors all the way."

After being released from jail in 2006, Ngobani started remaking his life.

"I met a guy called 'Regimental' Solomon, through Michaelis Art Library, who changed my life. He introduced me to [art entrepreneur and businessman] David Krut who employed me in his bookshop: I fell in love with books."

Ngobani's work ethic is fed not only by his hunger to learn, but also his need to earn. Savvy about the toughness of the industry, he is undeterred; his responsibilities lie close to his heart. "I have a girlfriend and a two-year-old son to support."

The award he has won, established in 1994 and run sporadically, is open to emerging artists under the age of 35 who draw or paint.

Rather than offering a monetary award, it presents an opportunity for a young person to work among professionals. The winner gets studio space in the Bag Factory in Newtown, materials, transport and accommodation for three months.

"I want to use this opportunity like it was my last. I want to travel. Art is my weapon; with it I can say 'never mind' my past.

"I have learnt in life you must not be a stereotype and get hooked by mistakes. Making art gives me strength to go on."

Says Hallatt: "We evaluated entrants not only on talent but on the possibility of growth. Blessing's work has immense depth to it. We don't want it to become formulaic. We want to help him develop."

After his residency, Ngobani will show work with Berlin-based Nigerian artist Emeka Udemba, who is working on a residency at the Bag Factory.