Burmese cats bouncing back in Myanmar 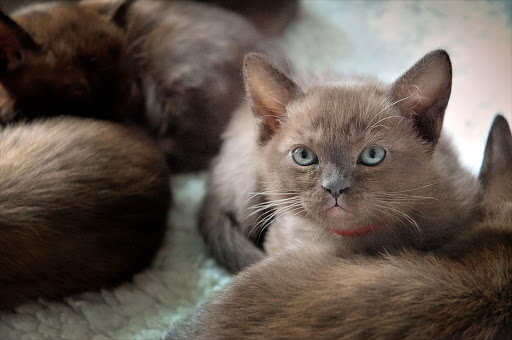 They are known for their sleek good looks, alluring eyes and sunny disposition, but one group of “Burmese” are virtually unknown in modern Myanmar — the country’s namesake pedigree cats.

Once believed to be the favoured pet of royalty and guardians of temples, the Burmese cat had vanished from its Southeast Asian ancestral homeland until enthusiasts decided to return them.

Yin Myo Su, who took on the project with the aim of preserving the country’s heritage as it emerges from military rule, has installed a growing family of the pedigree cats in a house on the shores of Inle Lake, in eastern Shan State.

The hotelier hopes to raise the profile of the breed among Myanmar people and even gave one to democracy icon Aung San Suu Kyi  — what seemed like a sure-fire strategy to give the cats a badly needed public relations boost.

But the Nobel Peace Prize winner’s notoriously possessive dog became “jealous” of the feline intruder and Suu Kyi was forced to send the cat back.

“So now we are taking care of her cat at home as well! In case one day she can take it back with her,” Yin Myo Su told AFP.

From just seven cats imported in 2008 — some sourced from Britain’s Harrods department store — the project now has 50 moggies living around Inle, including nine kittens, and has become a tourist draw.

A further 17 have been given to cat lovers in Shan State and the main city of Yangon.

“They like to be cuddled all the time,” she said at the cats’ home, the Inthar Heritage House, as a purring chocolate brown feline wound itself around her feet before collapsing onto its back for a tickle.

The idea of repatriating Burmese cats came from the China Exploration and Research Society (CERS), whose activities have included tracing a new source of the Yangtze river and promoting a yak cheese cottage industry in the Chinese province of Yunnan.

According to the non-profit group, Burmese cats — which share characteristics with other regional breeds such as the Siamese — have existed in mainland Southeast Asia for over a thousand years.

The breed was diluted out of existence by an influx of other types of cats to the region in the 19th and 20th century, with only a handful of purebreds taken to Britain during colonial rule, which ended in 1948.

Much of the modern breed has descended from a single female cat, Wong Mau, who was taken to the United States in 1930, according to world pedigree organisation The International Cat Association.

The short-haired cats have golden eyes and come in a range of colours from silvery blue to cream, although rich brown is the primary colour.

“We are quite happy with the reproduction because we got (mostly) original colours,” said Yin Myo Su, who runs the upmarket Inle Princess hotel.

She has two of the pedigree moggies at home in a menagerie of animals that she calls a “mini zoo”, including ducks, pigs, goats, geese and a monkey they have to keep hold of because it was “a gift from a monk”.

The hotelier is involved with an array of preservation projects and said she was keen for the house to be more than just a picturesque cattery.

“It’s hard for people to have a house in this region and I am building all this for cats? No way,” she said, adding that a restaurant, serving traditional recipes, was added to cover the $800-a-month cost of looking after the cats.

Among her other projects, Yin Myo Su is building a centre for the study and preservation of fish native to Inle Lake, but she said her staff have become sceptical about her motives for the new aquatic endeavour.