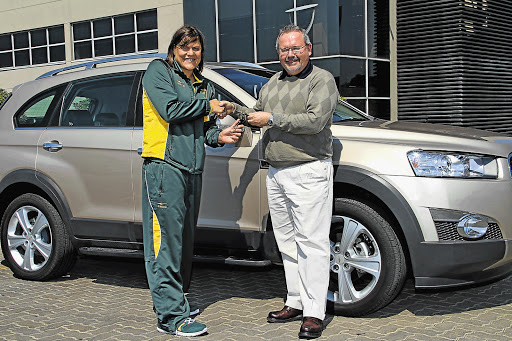 THERE was a golden welcome back for South African Paralympic swimming star, Natalie du Toit, this week.

First stop on her way home from Johannesburg's OR Tambo airport was the Woodmead marketing headquarters of General Motors SA, where she was handed the keys to a Chevrolet Captiva.

Painted gold, in honour of the golden performances produced by our swimming sensation at the 2012 London Paralympic Games - where she won three golds and one silver medal, the Chevrolet Captiva LTZ will be Du Toit's personal transport over the coming months as she attends many official sporting and business engagements.

Du Toit, a long-time Chevrolet brand ambassador, is much in demand as a motivational speaker following her success in the 2012 Paralympic Games.

"Natalie has been a Chevrolet brand ambassador for a number of years now and we are excited to be able to continue this relationship with her as she moves on from her medal winning success in swimming competition to a new era in her career as a world class athlete," said Chevrolet brand manager Tim Hendon.

"Natalie adds an element of excitement to an iconic automotive brand in South Africa - which we trust will transport her in style as a South African and international sports celebrity."