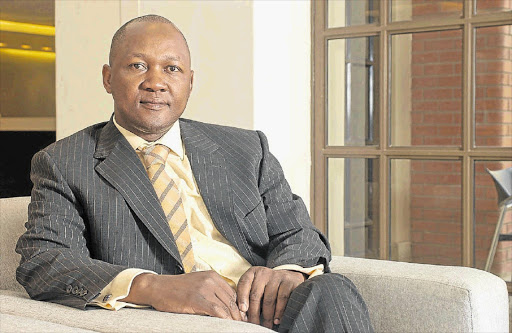 GOOD FOR HIM: Andile Ngcaba will re-invest his R1.26-billion
Image: Business Times

But Andile Ngcaba, the chairman of IT company Dimension Data's Middle East and Africa region, disagreed: if the policy was applied correctly, everyone could win.

Ngcaba recently benefited from a BEE transaction with Dimension Data (Didata) to the tune of about R1.26-billion through his BEE consortium Convergence Partners (previously Ngcaba Holdings), but has decided to re-invest the full amount in the company. This also ensured that Didata maintained its BEE status.

The consortium included nine broad-based black economic empowerment groups who were also beneficiaries of the deal.

Ngcaba said the nine had been carefully chosen so that the benefits of BEE would not be spread too thinly.

The decision to re-invest in Didata had been an easy one: firstly, because the company had grown substantially in the past nine years and, secondly, because Japanese telecommunications giant NTT had acquired the company in 2010.

When he joined the company in 2004, "we had about 3000 employees and now in 2012 we have doubled that to about 6000 employees, of which over 52% are previously disadvantaged individuals".

"That's a good number for us and it's growing," Ngcaba said. "We have more women, particularly black women, in middle, upper-middle and executive management, and the ratio of black people in senior management has increased.

"Of course, there's always room to improve, which we are continuously doing."

One of Ngcaba's major frustrations was the slow pace of regulation in the industry.

Ironically, Ngcaba used to be on the regulatory side of the industry, as director-general of communications, before leaving for the private sector in 2003.

His departure from public office prompted the government to institute a "cooling-off period" for civil servants, so as to avoid a conflict of interest.

But his days in government are long gone: now he sees regulators struggling to keep up with the rapid changes in technology.

"Regulation and policy must be ahead of technology and services, but they are far behind," Ngcaba said.

"If you write a policy or a regulation when something is already pervasive, that regulation or policy is not going to work. You need knowledge of the industry, deep skill to understand the changes happening in the industry, and that comes from experience. How can you regulate something you don't know?"

Technical skills, Ngcaba said, were a challenge in the IT field - but his calls for an ICT (information, communications, technology) university had been slammed.

"This is the best way to generate the growth of the industry on the African continent," Ngcaba said. "We need 15 more times the skills output that we see today, and applications are needed for communities and every city."

Ngcaba said key areas in the growth of Didata were cloud services, enterprise mobility and outsourcing.

And while the company has expanded to about 20 countries across Africa and the Middle East, Ngcaba said, Didata was also concentrating on trying to move into Francophone countries on the continent.