Sex, drugs and jocks on a roll 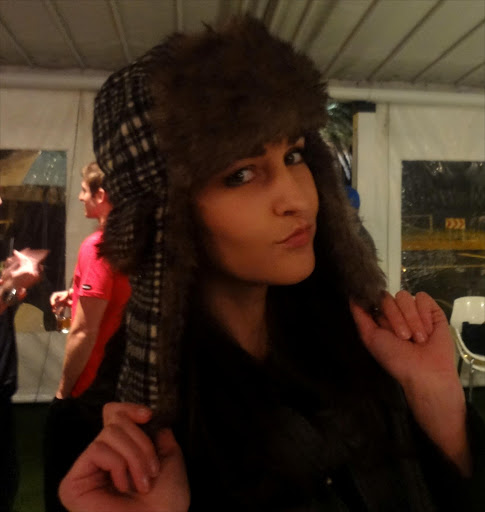 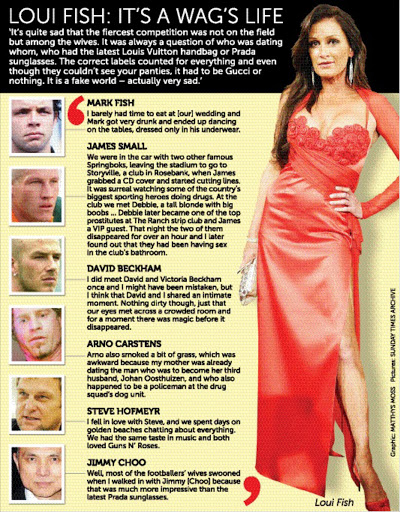 FOOTBALL WAG Loui Fish has released her autobiography featuring sensational claims of illicit sex, drugs and designer stilettos in an exposé that lifts the lid on the underbelly of South African sport.

Walking in my Choos is slated to hit stores this week and paints an extravagant picture of glamour, lust and betrayal set in the gold-paved upper echelons of professional sport.

The 39-year-old former lingerie model tells of what she claims was a violent love affair with ex-Springbok James Small and the "wandering eye" of her ex-husband, former Bafana Bafana star Mark Fish.

The sensational claims in the book include:

Allegedly being beaten by Small, who she said once chased her with a revolver;

Falling in love with Steve Hofmeyr as a teenager;

A former Sunday Times journalist having a fling with one-time Bafana Bafana coach Philippe Troussier; and

How Fish, who this week called his ex-wife an attention-seeking liar, boozed excessively and lusted after strippers.

While Loui kicked off a tour to promote her book, her ex-fiancé, Pretoria-based businessman Barthosz Rachwalski, was arrested following an altercation at the local sheriff's office.

Rachwalski was arrested on Monday for allegedly punching the sheriff of the Pretoria Magistrate's Court in a rage after furniture was repossessed at the couple's Waterkloof home.

Rachwalski told the Sunday Times the assault charges against him were withdrawn on Tuesday.

"I'm not interested in her book and certainly did not read it," he said.

Loui's publicist, Janis Ellis, said the pair broke off their engagement three weeks ago and that Loui was "rising like a phoenix from the ashes".

During Loui's two-year relationship with Small, she claims he chased her around their home with a revolver. She apparently retaliated with such force that his jaw had to be rewired by a doctor.

Yesterday, Small said Loui's claims were pathetic and sad. He described her as "more of a groupie than a girlfriend".

"I have made mistakes and I've owned up to my actions and am proud to say I came out the other side. I have apologised and moved on. I strongly oppose violence against women," he said.

When asked about her allegations about his drug use, he said: "Can she substantiate all these claims?"

Small left Loui for model Christina Storm, after which she met Fish at a nightclub.

"I was on my way to the club's toilet to do a line of coke when I bumped into Mark Fish," she writes.

After 11 years of marriage, the estranged pair's messy divorce was finalised in April last year.

Among other things, she accuses Fish of kissing the "plain" wife of a fellow Bolton Wanderers player at a party in Manchester and of forking out R22500 for a London strip-club jaunt while she was pregnant with their second child.

Fish told the Sunday Times: "I have always known Loui as a person in dire need of attention, who never hesitates to lie unashamedly to feed this need. I have just never anticipated that she would do so at this scale and at the direct cost of her own children."

She writes how she once shared an "intimate" moment with David Beckham when their eyes "met across a crowded room" and says she was a friend of Antonij Rupert, the late son of tycoon Johann Rupert, and shoe designer Jimmy Choo.

She said she lived next to musician Arno Carstens in Worcester.

She recalls an incident when Carstens's mother chased him around with a garden fork after he had insulted a pair of patchwork trousers she had made him. "He had told her that it was a f*****n kak broek. This set off the chase around the house - the long-legged Arno running away from his mother and her little garden fork," writes Loui.

She says she fell in love with Hofmeyr aboard the Simfonia cruise ship en route to Mauritius when she was 18.

"I fell in love with Steve, and we spent days on golden beaches chatting about everything. We had the same taste in music and both loved Guns N' Roses," she writes.

This was the first in a string of romantic misadventures with famous men. The book paints her as the unwitting victim of abuse and infidelity, and a devoted mother - although recent tabloid tales suggest otherwise. The foreword describes her as "an ordinary girl" with silicone double-Ds, likening her wit to that of Marilyn Monroe.

In the latter chapters, she pins her hope on Rachwalski, wondering if he could be "the one".

She implies that former Sunday Times journalist Nicola Koz, who covered the birth of her eldest son and whom she does not mention by name, had an affair with Bafana Bafana 's former coach, Frenchman Philippe Troussier.

Koz scoffed at the suggestion. "What absolute rubbish. I'm positive that the only French I do is a manicure, and maybe a bit of camembert on the side," she said.

The Sunday Times was unable to get comment from Hofmeyr, Carstens or Troussier.

"The Springbok code, as well as our disciplinary procedures, place a responsibility of good conduct on our players, and either activity would clearly breach those codes," he said.

If a national player failed a dope test, whether for performance-enhancing or recreational drugs, he would be subjected to disciplinary procedures and would be banned, he said .