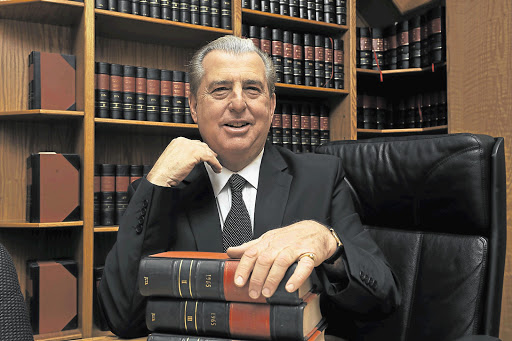 A top personal-injury law firm faces multiple legal challenges by former clients who claim they were cheated out of millions due to them from the Road Accident Fund.

Manresh Haripersad, Yvonne Fourie and Juanne Elize de la Guerre have lodged damages claims totalling almost R4-million against Ronald Bobroff and Partners in the High Court in Pretoria and Johannesburg. The firm confirmed that it was defending these cases.

The legal bid by Haripersad, Fourie and De la Guerre comes in the wake of last week's application by a Midrand couple, Jennifer and Matthew Graham, in the High Court in Pretoria to have Bobroff and his son, Darren, also a lawyer in the company, struck from the roll.

Because they did not have any money to finance their claims for accident injuries, Haripersad, Fourie and De la Guerre initially entered into a contingency "no win, no fee" agreement with the law firm in terms of which they would not be held liable for any costs if they lost the case.

But they have now accused Ronald Bobroff and Partners of setting fees higher than those stipulated by the Contingency Fees Act. According to the act, contingency fees are limited to either 25% of the amount awarded in the judgment or double the attorney's usual fees, whichever is the lower amount, but they were charged up to 40%.

One of the deductions was an amount of R184000, including VAT, for professional fees for 190 hours of work.

The deduction, which is being disputed by Haripersad, includes an itemised bill for more than 360 items, including:

Haripersad is claiming R367999. His case is expected to come before the High Court in Johannesburg in February.

The father of four, who walks with a limp as a result of injuries sustained in a car accident in July 2002, told the Sunday Times he simply wanted justice.

Fourie issued summons for R3.1-million in damages in September against the law firm for accepting, on her behalf, a very low settlement offer from the RAF. She initially rejected a R1-million settlement offer made in August last year, but the company later accepted an offer of almost R1.8-million. Of that, she received R1082419.

Fourie and her son, Lincoln, were seriously injured in an accident in June 2005 in which her husband, Johannes, and 10-month-old daughter, Cayleigh, died.

She alleges the law firm failed to properly investigate her and her son's injuries and medical status.

De la Guerre is seeking an order from the High Court in Pretoria declaring the law firm's "percentage contingency fee agreement" invalid after it deducted more than R1-million in costs and other expenses from her R2.8-million payout.

The beautician from Boksburg sustained head, neck and back injuries in a car accident in November 2005.

Ronald Bobroff and Partners has disputed in court papers all the allegations of Haripersad, saying its estimate of 190 hours for work done was "accurate" and that the fee of R184 000 was "reasonable".

Anthony Millar of Norman Berger and Partners, who is representing the three, accused Ronald Bobroff and Partners of taking advantage of "the most vulnerable members of our society. The one thing they haven't taken is responsibility; they have taken everything else."

The Law Society of the Northern Provinces confirmed that a disciplinary inquiry into Ronald and Darren Bobroff was set to continue later this month.

It stems from a complaint by law firm Edward Nathan Sonnenbergs, on behalf of the Grahams, in June last year against the father and son for charging excessive fees.

Edward Nathan Sonnenbergs was instructed by Discovery Holdings to act on behalf of members of Discovery Health Medical Scheme who were former clients of Ronald Bobroff and Partners, because it was concerned about the steep professional fees it was charging.

Ronald Bobroff said in a statement that the Graham matter was before the Law Society of the Northern Provinces and would be dealt with according to the society's procedures.

"We obviously vigorously dispute the contrived complaint prepared by Discovery and its large legal team through the mouths of Mr and Mrs Graham, and look forward to hearing them articulating this in their own words."

He said the matters involving Haripersad, Fourie and De la Guerre were being defended by them and their insurers, adding: "We are confident, as has already been the case in one matter against us by Norman Berger and Partners, that these matters will likewise be dismissed by the court as being wholly without any substance."